Jason Nelson Robards, Jr. (July 26, 1922 – December 26, 2000) was an American actor on stage, and in film and television. He was a winner of the Tony Award, two Academy Awards and the Emmy Award. He was also a United States Navy combat veteran of World War II.

He became famous playing works of American playwright Eugene O'Neill and regularly performed in O'Neill's works throughout his career. Robards was cast both in common-man roles and as well-known historical figures.

Robards was born in Chicago, the son of Hope Maxine (née Glanville) Robards and Jason Robards, Sr.,[1] an actor who regularly appeared on the stage and in such early films as The Gamblers (1929). Robards was of German, English, Welsh, Irish, and Swedish descent.[2][3]

The family moved to New York City, when Jason Jr. was still a toddler, and then moved to Los Angeles when he was six years old. Later interviews with Robards suggested that the trauma of his parents' divorce, which occurred during his grade-school years, greatly affected his personality and worldview.

As a youth, Robards also witnessed first-hand the decline of his father's acting career. The elder Robards had enjoyed considerable success during the era of silent films, but he fell out of favor after the advent of "talkies" (sound film), leaving the younger Robards soured on the Hollywood film industry.

The teenage Robards excelled in athletics, running a 4:18-mile during his junior year at Hollywood High School in Los Angeles. Although his prowess in sports attracted interest from several universities, Robards decided to join the United States Navy upon his graduation in 1940.

As a radioman 3rd class in the Navy, Robards served aboard a heavy cruiser, the USS Northampton (CA-26) in 1941. On December 7, 1941, he was aboard the Northampton in the Pacific Ocean about 100 miles (160 km) off Hawaii. Contrary to some stories, he witnessed the devastation of the Japanese attack on Hawaii only afterwards, when the Northampton returned to Pearl Harbor two days later.[4] The Northampton was later directed into the Guadalcanal campaign in World War II's Pacific theater, where she participated in the Battle of the Santa Cruz Islands.

During the Battle of Tassafaronga in the waters north of Guadalcanal on the night of November 30, 1942, the Northampton was sunk by hits from two Japanese torpedoes. Robards found himself treading water until near daybreak, when he was rescued by an American destroyer. For its service in the war the Northampton was awarded six battle stars.

Two years later, in November 1944, Robards was radioman on the USS Nashville (CL-43), the flagship for the invasion of Mindoro in the northern Philippines. On December 13, she was struck by a kamikaze aircraft off Negros Island in the Philippines. The aircraft hit one of the port five-inch gun mounts, while its two bombs set the midsection ablaze. There were 223 casualties, and the Nashville was forced to return to Pearl Harbor and then to the Puget Sound Naval Shipyard in Bremerton, Washington, for repairs.

Robards served honorably during the war, but was not a recipient of the U.S. Navy Cross for bravery, as has been recorded in numerous uncited resources. The inaccurate story that he was a Navy Cross recipient derives from a 1979 column by Hy Gardner[5] which stated that Robards was awarded the medal. From this false story, many subsequent references repeated the inaccuracy. But Robards's name does not appear on any official or semi-official rolls of Navy Cross recipients.[6]

It was on the Nashville that Robards first found a copy of Eugene O'Neill's play Strange Interlude in the ship's library.[7][8] It was also in the Navy that he first started thinking seriously about becoming an actor. He had emceed for a Navy band in Pearl Harbor, got a few laughs and decided he liked it. His father suggested he enroll in the American Academy of Dramatic Arts in New York City.[7]

Robards decided to get into acting after the war and his career started out slowly. He moved to New York City and found small parts – first in radio and then on the stage. His big break was landing the starring role in José Quintero's 1956 off-Broadway-theatre revival production and the later 1960 television film of O'Neill's The Iceman Cometh, portraying the philosophical salesman Hickey; he won an Obie Award for his stage performance. He later portrayed Hickey again in another 1985 Broadway revival also staged by Quintero. Robards also created the role of Jamie Tyrone in the original Broadway production of O'Neill's Pulitzer Prize and Tony Award-winning Long Day's Journey into Night, which was also directed by Quintero; Robards appeared in the lead role of James Tyrone, Sr. in a 1988 production of the same play. Other O'Neill plays directed by Quintero and featuring Robards included Hughie (1964), A Touch of the Poet (1977) and A Moon for the Misbegotten (1973). He repeated his role in Long Day's Journey into Night in the 1962 film and televised his performances in A Moon for the Misbegotten (1975) and Hughie (1984). 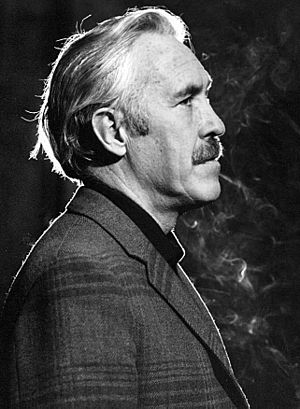 He made his film debut in the two-reel comedy Follow That Music (1947), but after his Broadway success he was invited to make his feature debut in The Journey (1959). He became a familiar face to movie audiences throughout the 1960s, notably for his performances in A Thousand Clowns (1965) (repeating his stage performance), The Night They Raided Minsky's (1968) and Once Upon a Time in the West (1968).

He appeared on television anthology series, including two segments in the mid-1950s of CBS's Appointment with Adventure.

Robards played three different U.S. presidents in film. He played the role of Abraham Lincoln in the TV movie The Perfect Tribute (1991) and supplied the voice for two television documentaries, first for "The Presidency: A Splendid Misery" in 1964, and then again in the title role of the 1992 documentary miniseries Lincoln. He also played the role of Ulysses S. Grant in The Legend of the Lone Ranger (1981) and supplied the Union General's voice in the PBS miniseries The Civil War (1990). He also played Franklin D. Roosevelt in FDR: The Final Years (1980).

Robards appeared in two dramatizations based on the Watergate scandal. In 1976 he portrayed Washington Post executive editor Ben Bradlee in the film All the President's Men, based on the book by Carl Bernstein and Bob Woodward. The next year, he played fictional president Richard Monckton (based on Richard Nixon) in the 1977 television miniseries Washington: Behind Closed Doors based on John Ehrlichman's roman à clef The Company. In 1983, Robards starred in the television movie The Day After where he played Dr. Russell Oakes. The movie is one of the most viewed television programs of all time.

Robards voiced a number of documentaries, including Ken Burns's Empire of the Air: The Men Who Made Radio (1991).

In Magnolia (1999), his final feature film role, the ailing Robards portrayed a dying man who reconnects with his estranged son, played by Tom Cruise.

Robards received eight Tony Award nominations,[9] – more than any other male actor as of March 2015[ref]. He won the Tony for Best Performance by a Leading Actor in a Play for his work in The Disenchanted, (1959); this was also his only stage appearance with his father.

He received the Academy Award for Best Supporting Actor in consecutive years: for All the President's Men (1976), portraying Washington Post editor Ben Bradlee, and for Julia (1977), portraying writer Dashiell Hammett (1977).[10] He was also nominated for another Academy Award for his role as Howard Hughes in Melvin and Howard (1980).

Robards received the Primetime Emmy Award for Outstanding Lead Actor – Miniseries or a Movie for Inherit the Wind (1988).[11]

In 1997, Robards received the U.S. National Medal of Arts, the highest honor conferred to an individual artist on behalf of the people. Recipients are selected by the U.S. National Endowment for the Arts and the medal is awarded by the President of the United States.

In 1999, he was among the recipients at the Kennedy Center Honors, an annual honor given to those in the performing arts for their lifetime of contributions to American culture.[12]

Jason Robards narrated the public radio documentary, Schizophrenia: Voices of an Illness, produced by Lichtenstein Creative Media, which was awarded a 1994 George Foster Peabody Award for Excellence in Broadcasting. According to Time Magazine, Robards offered to narrate the schizophrenia program, saying that his first wife had been institutionalized for that illness.[13]

Robards had six children from his four marriages, including actor Jason Robards III (born 1949) by his first wife, Eleanor Pittman; and actor Sam Robards by his third wife, actress Lauren Bacall, to whom he was married in 1961. They divorced in 1969, in significant part because of his alcoholism.[16]

In 1972 he was seriously injured in an automobile accident when he drove his car into the side of a mountain on a winding California road, requiring extensive surgery and facial reconstruction. The accident may have been related to his longtime struggle with alcoholism.[7][8] Robards overcame his addiction and went on to publicly campaign for alcoholism awareness.[17][18]

Robards was an American Civil War buff and scholar, an interest which informed his portrayal of the voice of Ulysses S. Grant in The Civil War series by filmmaker Ken Burns.

Robards was a resident of the Southport section of Fairfield, Connecticut.[19] He died of lung cancer in Bridgeport, Connecticut, on December 26, 2000, at the age of 78. He was cremated.

His death was mourned by both fans and actors. "He was the last of a breed of actors who dedicated themselves to a life in the theater. Without asking for the role, he was our elder statesman," said actor Kevin Spacey.[20]

The Jason Robards Award was created by the Roundabout Theatre Company in New York City in his honor and his relationship with the theatre.