Born at Limoges, France into a surgeon's family, he enlisted in the French royal army in early 1778 when he was not quite sixteen. Assigned to the Regiment of Auxerrois, he participated in the ill-fated assault at the Siege of Savannah on 9 October 1779 during the American War of Independence. After service in the West Indies, he returned home in 1782 sick with a fever. Bouts of illness (possibly malaria) troubled him for the rest of his life. In 1784 he was discharged from the army and set up a haberdashery business in Limoges. He married a dressmaker in 1788 and the couple had five daughters.[1]

War of the First Coalition 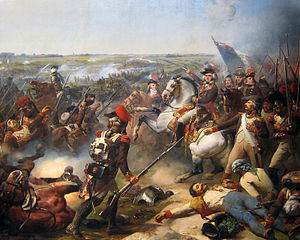 Battle of Fleurus, won by Jean-Baptiste Jourdan over the Austrian forces led by the princes of Coburg and Orange on 26 June 1794.

When the National Assembly asked for volunteers, Jourdan was elected Chef de bataillon of the 2nd Haute-Vienne Battalion. He led his troops in the French victory at the Battle of Jemappes on 6 November 1792 and in the defeat at the Battle of Neerwinden on 18 March 1793. Jourdan's leadership skills were noticed and led to his promotion to general of brigade on 27 May 1793 and to general of division two months later. On 8 September, he led his division at the Battle of Hondschoote, in which he was wounded in the chest. On 22 September he was named to lead the Army of the North.[2] Three of his predecessors, Nicolas Luckner, Adam Philippe, comte de Custine, and Jean Nicolas Houchard were under arrest and later executed by guillotine.

His first assignment was to relieve Jacques Ferrand's 20,000-man garrison of Maubeuge which was besieged by an Austrian-Dutch army commanded by Prince Josias of Coburg. The Committee of Public Safety felt that this mission was so important that it dispatched Lazare Carnot to oversee the operation. Jourdan defeated Coburg on 15–16 October at the Battle of Wattignies and broke the siege. Carnot claimed that it was his own intervention that won the victory. Historian Michael Glover writes that the first day's attack was a failure because of Carnot's interference, while the second day's success resulted from Jourdan using his own tactical judgment. In any case, only Carnot's account reached Paris.[3]

On 10 January 1794, after refusing to carry out an impossible order, Jourdan was hauled before the Committee of Public Safety. Carnot presented Jourdan's arrest warrant, which was signed by Maximilien de Robespierre, Bertrand Barère, and Jean-Marie Collot d'Herbois. Jourdan was saved from certain execution when an eyewitness, Representative-on-mission Ernest Joseph Duquesnoy rose and contradicted Carnot's version of events at Wattignies. Spared from arrest, Jourdan was nevertheless dismissed from the army and sent home.[4]

The government soon recalled Jourdan to lead the Army of the Moselle. In May, he was ordered north with the left wing of the Army of the Moselle. This force was combined with the Army of the Ardennes and the right wing of the Army of the North to form an army which did not officially become the Army of Sambre-et-Meuse until 29 June 1794. With 70,000 soldiers of the new army, Jourdan laid siege to Charleroi on 12 June. An 41,000-man Austrian-Dutch army under William V, Prince of Orange defeated the French at the Battle of Lambusart on 16 June and drove them south of the Sambre River. Casualties numbered 3,000 for each army.[5] Undeterred, Jourdan immediately marched on Namur to the east-northeast of Charleroi. Instead of attacking Namur, he suddenly swung west and appeared to the north of Charleroi. After a brief siege, the 3,000-man Austrian garrison of Charleroi surrendered on 25 June.[6] Military strategist B. H. Liddell Hart cited Jourdan's maneuver as an example of the Indirect approach, even though it was probably inadvertent on the French general's part.[7] Too late to save Charlerloi, Coburg's 46,000-strong army attacked Jourdan's 75,000 French on 26 June. The Battle of Fleurus proved to be a strategic French victory when Coburg called off his attacks and retreated.[8] During the action, the Allied attacks pushed back both French flanks, but Jourdan stubbornly fought it out and was saved when François Joseph Lefebvre's division held its ground in the center.[9]

After Fleurus, the Allied position in the Austrian Netherlands collapsed. The Austrian army evacuated Belgium and the Dutch Republic was extinguished by the advancing French armies in 1795. On 7 June 1795, Jourdan's army concluded the long but successful Siege of Luxembourg.[10] Operations east of the Rhine were less successful that year, with the French capturing, then losing Mannheim.[11]

In the Rhine Campaign of 1796 Jourdan's Army of Sambre-et-Meuse formed the left wing of the advance into Bavaria. The whole of the French forces were ordered to advance on Vienna, Jourdan on the extreme left and Jean Victor Marie Moreau in the centre by the Danube valley, Napoleon Bonaparte on the right in Italy. The campaign began brilliantly, the Austrians under the Archduke Charles being driven back by Moreau and Jourdan almost to the Austrian frontier. But the archduke, slipping away from Moreau, threw his whole weight on Jourdan, who was defeated at the Battle of Amberg in August. Jourdan failed to retrieve the situation at the Battle of Würzburg and was forced over the Rhine after the Battle of Limburg, which cost the life of François Séverin Marceau-Desgraviers. Moreau had to fall back in turn, and the operations of the year in Germany were a failure. The chief cause of defeat was the plan of campaign imposed upon the generals by their government. Jourdan was nevertheless made the scapegoat and was not employed for two years. In those years he became prominent as a politician and above all as the framer of the famous conscription law of 1798, which came to be known as the Jourdan Law.[12]

War of the Second Coalition

When the war was renewed in 1799, Jourdan was at the head of the army on the Rhine, but again underwent defeat at the hands of the Archduke Charles at the battles of Ostrach and Stockach in late March. Disappointed and broken in health, he handed over command to André Masséna. He resumed his political duties, and was a prominent opponent of the coup d'état of 18 Brumaire, after which he was expelled from the Council of the Five Hundred. Soon, however, he became formally reconciled to the new régime, and accepted from Napoleon fresh military and civil employment. In 1800 he became inspector-general of cavalry and infantry and representative of French interests in the Cisalpine Republic.[12]

In 1804, Napoleon appointed Jourdan a marshal of France. He remained in the newly created Kingdom of Italy until 1806, when Joseph Bonaparte, whom his brother made king of Naples in that year, selected Jourdan as his military adviser. He followed Joseph into Spain in 1808; but Joseph's throne had to be maintained by the French army, and throughout the Peninsular War the other marshals, who depended directly upon Napoleon, paid little heed either to Joseph or to Jourdan.[12] Jourdan was blamed for the defeat at the Battle of Talavera in 1809 and replaced by Marshal Nicolas Soult. He was reinstated as Joseph's chief of staff in September 1811, but given few troops.[13] After the disastrous French defeat at the Battle of Salamanca in July 1812, Joseph and Jourdan were forced to abandon Madrid and retreat to Valencia. Joining with Soult's army, which evacuated Andalusia, the French were able to recapture Madrid during the Siege of Burgos campaign and push Wellington's Anglo-Portuguese army back to Portugal.

The following year, Wellington advanced again with a large, well-organized army. Repeatedly outmaneuvering the French, the Anglo-Allied army forced Joseph and Jourdan to fight at the Battle of Vitoria on 21 June 1813. After the decisive French defeat, which resulted in the permanent loss of Spain, Jourdan held no important command up to the fall of the Empire. He adhered to the Bourbon Restoration of 1814, and though he rejoined Napoleon in the Hundred Days and commanded a minor army, he submitted to the Bourbons again after the Battle of Waterloo. Greatly to his credit, Jourdan refused to be a member of the court which sentenced Marshal Michel Ney to death. He was made a count, a peer of France in 1819, and governor of Grenoble in 1816. In politics he was a prominent opponent of the royalist reactionaries and supported the revolution of 1830. After this event he held the portfolio of foreign affairs for a few days, and then became governor of the Invalides, where his last years were spent. Jourdan died in Paris on 23 November 1833 and was buried in Les Invalides.[12]

While in exile on Saint Helena, Napoleon admitted,

I certainly used that man very ill ... I have learned with pleasure that since my fall he invariably acted in the best manner. He has thus afforded an example of that praiseworthy elevation of mind which distinguishes men one from another. Jourdan is a true patriot; and that is the answer to many things that have been said of him.[14]