Jean Lannes, 1st Duc de Montebello,1st Prince de Siewierz (10 April 1769 – 31 May 1809), was a Marshal of the Empire. He was one of Napoleon's most daring and talented generals. Napoleon once commented on Lannes: "I found him a pygmy and left him a giant". A personal friend of the emperor, he was allowed to address him with the familiar "tu", as opposed to the formal "vous".

Lannes was born in the small town of Lectoure, in the Gers department in the south of France. He was the son of a Gascon farmer, Jeannet Lannes (1733 – 1812, son of Jean Lannes (d. 1746) and wife Jeanne Pomiès (d. 1770) and paternal grandson of Pierre Lane and wife Bernarde Escossio, both died in 1721), and wife Cécile Fouraignan (1741 – 1799), and was apprenticed to a dyer. He had little education, but his great strength and proficiency in all manly sports caused him in 1792 to be elected sergeant-major of the battalion of volunteers of Gers, which he had joined on the breaking out of war between Spain and the French republic. He served through the campaigns in the Pyrenees in 1793 and 1794, and rose by distinguished conduct to the rank of chef de brigade. However, in 1795, on the reform of the army introduced by the Thermidorians, he was dismissed from his rank.

He married twice, in Perpignan, 19 March 1795 to Paulette Méric, whom he divorced because of infidelity in 1800, after she had given birth to an illegitimate son while he was campaigning in Egypt:

one who succeeded in his titles and three others who used the courtesy title of Baron. One of his direct descendants, Philippe Lannes de Montebello, was until 2008 the director of the Metropolitan Museum of Art.

Campaigns of Italy and Egypt 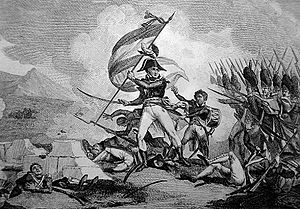 He re-enlisted as a simple volunteer in the French Armée d'Italie, and in its campaign of 1796, he again fought his way up to high rank, being eventually made a general of brigade by orders of Bonaparte. He was distinguished in every battle. At the Battle of Bassano he captured two enemy flags with his own hands[1] and was wounded in the Battle of the Bridge of Arcole while aiding Bonaparte to escape the Austrian advance. He was chosen by Bonaparte to accompany him to Egypt as commander in one of Kléber's brigades, in which capacity he greatly distinguished himself, especially on the retreat from Syria. He was wounded at the Battle of Abukir. He went back to France with Bonaparte, and assisted him in his 1799 coup. After Bonaparte's take over and appointment as Consul of France, Lannes was promoted to the ranks of general of division and commandant of the consular guard. Back with the Armée d'Italie, Lannes commanded the advanced guard in the crossing of the Alps in 1800, was instrumental in winning the Battle of Montebello, from which he afterwards took his title, and bore the brunt of the Battle of Marengo.

Service to the Empire 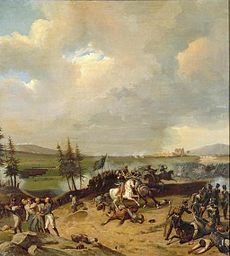 Jean Lannes' victory at the battle of Saalfeld (1806)

In 1801 Napoleon sent him as ambassador to Portugal. Opinions differ as to his merits in this capacity; Napoleon never made such use of him again. Lannes purchased the seventeenth-century Château de Maisons, near Paris, in 1804 and had one of its state apartments redecorated for a visit from Napoleon.

On the establishment of the empire he was created a Marshal of France (1804), and commanded once more the advanced guard of a great French army in the campaign of Austerlitz. At Austerlitz he had the left of the Grande Armée. In the 1806-07 campaign he was at his best, commanding his corps with the greatest credit in the march through the Thuringian Forest, the action of Saalfeld (which is studied as a model today at the French Staff College) and the Battle of Jena. His leadership of the advanced guard at Friedland was even more prominent.

In 1807, Napoleon recreated the duchy of Siewierz (Sievers), and granted it to Jean Lannes, after Prussia was forced to cede all her acquisitions from the 2nd and 3rd partitions of Poland.

After this, Lannes was to be tested as a commander-in-chief, for Napoleon took him to Spain in 1808, and gave him a detached wing of the army, with which he won a victory over Castaños at Tudela on 22 November. In January 1809 he was sent to attempt the capture of Saragossa, and by 21 February, after one of the most stubborn defences in history, was in possession of the place. He said, "this damned Bonaparte is going to get us all killed" after his last campaign in Spain. In 1808, Napoleon created him Duc de Montebello, and in 1809, for the last time, gave him command of the advanced guard. He took part in the engagements around Eckmühl and the advance on Vienna. With his corps he led the French army across the Danube, and bore the brunt, with Masséna, of the terrible battle of Aspern-Essling. On 22 May he received a mortal wound. His eldest son was made a peer of France by Louis XVIII. 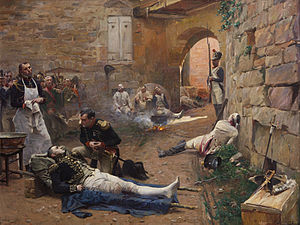 Death of Marshal Lannes at Essling (1809)

On 22 May, during a lull in the second day of the Battle of Aspern-Essling, Marshal Lannes went and sat down at the edge of a ditch, his hand over his eyes and his legs crossed. As he sat there, plunged in gloomy meditation on having seen his friend general de brigade Pouzet killed mid-conversation by a cannonball, a cannonball, fired from a gun at Enzersdorf, ricochetted, and struck him just where his legs crossed. The knee-pan of one was smashed, and the back sinews of the other torn. The Marshal said, "I am wounded; it's nothing much; give me your hand to help me up." He tried to rise, but could not. He was carried to the tête de port, where the chief surgeons proceeded to dress his wound. One of the marshal's legs was amputated. He bore the operation with great courage; it was hardly over when Napoleon came up and, kneeling beside the stretcher, wept as he embraced the marshal. Lannes' other leg was later also amputated. On 23 May he was transported by boat to the finest house in Kaiserebersdorf. Eight days later he succumbed to his wounds at daybreak on 31 May. Lannes was initially buried in Les Invalides, Paris. But in 1810, Lannes was exhumed and reinterred in the Panthéon national after a grandiose ceremony. 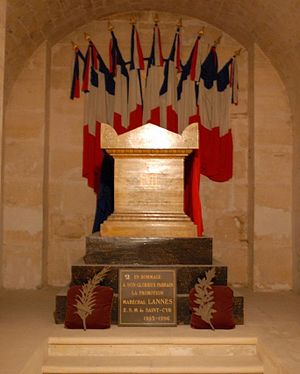 Tomb of Lannes in the Panthéon, Paris

Lannes ranks with Louis Nicolas Davout and André Masséna as the ablest of all of Napoleon's marshals. He was continually employed in tasks requiring the utmost resolution and daring, and more especially when the emperor's combinations depended upon the vigour and self-sacrifice of a detachment or fraction of the army. It was thus with Lannes at Friedland and at Aspern as it was with Davout at Austerlitz and Auerstädt, and Napoleon's estimate of his subordinates' capacities can almost exactly be judged by the frequency with which he used them to prepare the way for his own shattering blow. Dependable generals with the usual military virtue, or careful and exact troop leaders like Soult and Macdonald, are kept under Napoleon's own hand for the final assault which he himself launched; the long hours of preparatory fighting against odds of two to one, which alone made the final blow possible, he entrusted only to men of extraordinary courage and high capacity for command. In his own words, he found Lannes a pygmy, and left him a giant. Lannes's place in his affections was never filled.