From Infogalactic: the planetary knowledge core
Jump to: navigation, search
For other places in Pennsylvania named Jefferson, see Jefferson, Pennsylvania.

Jefferson County is a county located in the U.S. state of Pennsylvania. As of the 2010 census, the population was 45,200.[1] Its county seat is Brookville.[2] The county was established on March 26, 1804, from part of Lycoming County and later organized in 1830.[3] It is named for President Thomas Jefferson.[4] It is home to Punxsutawney Phil, the groundhog that predicts when spring will come every February 2 (Groundhog Day). 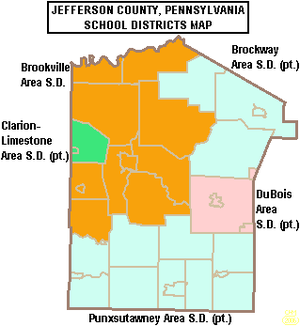 Two Pennsylvania state parks are in the county.

The Jefferson County Fair is held annually in July. 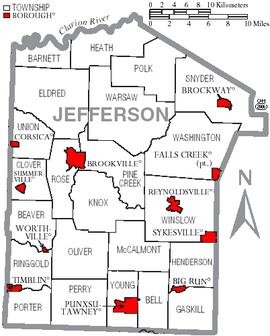 Under Pennsylvania law, there are four types of incorporated municipalities: cities, boroughs, townships, and, in at most two cases, towns. The following boroughs and townships are located in Jefferson County: