From Infogalactic: the planetary knowledge core
Jump to: navigation, search
For other Pennsylvania townships of the same name, see Jefferson Township, Pennsylvania.

Jefferson Township is a township in Dauphin County, Pennsylvania, United States. The population was 362 at the 2010 census.[1]

Jefferson Township was named for Thomas Jefferson, third President of the United States.[2]

Jefferson Township is in northeastern Dauphin County, bordered on the south by the ridgecrest of Peters Mountain. Most of the township is mountainous and forested; only the western end of the township, in the valley of the North Fork of Powell Creek, has settlements and agriculture. The unincorporated community of Carsonville is in the North Fork valley.

There were 133 households, out of which 27.1% had children under the age of 18 living with them, 54.9% were married couples living together, 6.8% had a female householder with no husband present, and 31.6% were non-families. 27.1% of all households were made up of individuals, and 8.3% had someone living alone who was 65 years of age or older. The average household size was 2.46 and the average family size was 2.98. 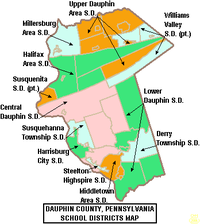 Residents of Jefferson Township may attend the local, public schools operated by Upper Dauphin School District which provides kindergarten through 12th grade. The District's enrollment declined to 1,237 students K-12 in 2013. Upper Dauphin Area School District ranked 322nd out of 500 public schools for academic achievement of its pupils in 2013. Jefferson Township residents may also apply to attend Infinity Charter School located on 51 Banks St, Harrisburg and any of the Commonwealth's 13 public cyber charter schools at no additional cost to the parents. The Upper Dauphin Area School District is required to pay the charter school and cyber charter school tuition for residents who attend these public schools.[4] [5] By Commonwealth law, if the District provides transportation for its own students, then the District must provide transportation to any school that lies within 10 miles of its borders. Residents may also seek admission for their school aged child to any other public school district. When accepted for admission, the student's parents are responsible for paying an annual tuition fee set by the Pennsylvania Department of Education. In 2012, the tuition fees for Upper Dauphin Area School District were: Elementary School - $8,961.52, High School - $9,565.39.

Capital Area Intermediate Unit #15 provides a wide variety of services to children living in its region which includes Jefferson Township. Early screening, special educations services, speech and hearing therapy and many other services like driver education are available. Services for children during the preschool years are provided without cost to their families when the child is determined to meet eligibility requirements. CAIU15 also operates Capital Area Online Learning Association which is an online learning program operated in association with the local public schools.[6]

Jefferson Township residents have access to Harrisburg Area Community College. People residing in Jefferson Township fund HACC in part through an annual payment made by Upper Dauphin School District.[7] Twenty two local public school districts are required to contribute annually to HACC regardless of whether any residents are attending the college. Full-time students from these districts, who attend HACC, pay $1,674 for 12 credit hours.