The Jerrahi (Turkish: Cerrahiyye, Cerrahilik) are a Sufi tariqah (order) derived from the Halveti order. Their founder was Muhammad Nureddin al-Jerrahi, who lived in Istanbul and is buried at the site of his tekke in Karagumruk - Istanbul. During the late Ottoman period, this order was widespread throughout the Balkans, particularly Macedonia and southern Greece (Morea). 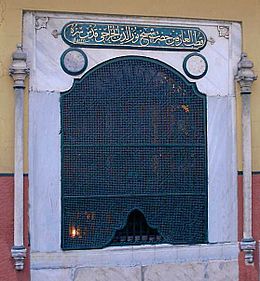 Türbe of the sufi Nur al-Din al-Jarrāhī in Istanbul

Founded in the 17th century by Muhammad Nuraddin al-Jarrahi, the Halveti-Jerrahi Order of Dervishes is a cultural, educational, and social relief organization with members from diverse professional, ethnic and national backgrounds.

Al-Jarrahi was a direct descendant of Muhammad both from his mother and father. The path he founded is dedicated to the teachings and traditions, through an unbroken chain of spiritual transmission (silsilah), that go directly back to Muhammad.

The head dergah "convention" of the Halveti-Jerrahi order is in Karagumruk - Istanbul. It has branches in some European countries, Australia, South Africa, South America and North America, including Los Angeles, New York, Mexico, San Francisco, Toronto and Chicago.

Branches of the Halveti-Jerrahi conduct gatherings where the dervishes perform Sufi remembrance ceremonies (dhikr), practice sufi music, serve dinner, pray together and listen to the discourses (sohbets) of their Sufi guides.