He began his career as a talent agent, having managed relatively unknown singer John Denver in 1970, developing Denver's success through concerts, television specials and film roles, including Oh, God! (1977). Weintraub has been credited with making "show business history" by being the first to organize and manage large arena concert tours for singers. Among the other performers whose tours he managed were Elvis Presley, Frank Sinatra, The Four Seasons, Neil Diamond, Bob Dylan, and Led Zeppelin.

Following his years as a concert promoter, he began producing films. Among them were director Robert Altman's Nashville (1975), Barry Levinson's Diner (1982), the original version of The Karate Kid (1984) and its 2010 remake, as well as the remake of Ocean's Eleven (2001) and two sequels to the rebooted version. Later, Weintraub was executive producer of HBO's series The Brink and HBO's Behind the Candelabra in 2013, which won an Emmy. In 2014, he won another Emmy as co-producer of Years of Living Dangerously, a television documentary about global warming. In 2011, HBO broadcast a television documentary about Weintraub's life, called His Way.

Weintraub was born to a Jewish family in Brooklyn, and raised in the Bronx, the son of Rose (née Bass) and Samuel Weintraub.[3] His father was a gem dealer.[4] While growing up, he worked as a theater usher and as a waiter in the Catskills.[5]

After several years at MCA, where he first started work as a mailroom clerk, he left and formed his own personal management company. While at MCA, he was assistant to Lew Wasserman, whom he thought of as a father figure.[5] In the 1960s, he co-founded the vocal group The Doodletown Pipers. Among the acts that Weintraub managed at this time were Paul Anka, Shelley Berman, Pat Boone, Joey Bishop, The Four Seasons, Jackson Browne, Jimmy Buffett and singer Jane Morgan, whom he would later marry.[6] 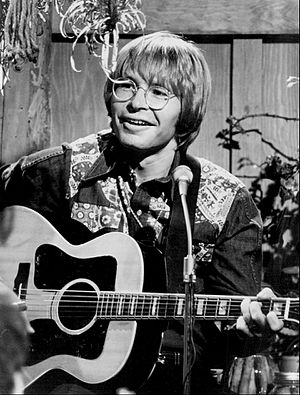 Weintraub received an Emmy for producing "An Evening with John Denver" in 1975.[2]

Weintraub was the manager of singer and actor John Denver whom he signed in 1970. Weintraub first saw Denver performing at a small club in Greenwich Village and liked his easy, "mountaineer's" manner. Weintraub produced a dozen television music specials starring Denver, winning an Emmy for one of them.[7] Later, he produced the film Oh, God! (1977), starring George Burns and Denver. After Denver became a major success as a singer, he bought Weintraub a Rolls-Royce as a thank-you gift. Weintraub said, "I couldn't help thinking that it wasn't too long ago that neither of us had bus fare."[7] Denver and Weintraub's professional relationship ended acrimoniously, however.[8]

In 1970 Weintraub convinced Elvis Presley and his manager, Col. Tom Parker, to do his first national tour, something they had not considered, as Elvis was by then a successful film star. The tour, with a modern sound system created for it, helped develop Weintraub's career as a concert promoter.[7]

He next promoted a tour for Frank Sinatra in 1974, whom Weintraub first put in Madison Square Garden's boxing arena. For the previous six years, Sinatra had basically retired due to the failure of his last album. Weintraub convinced him to do a tour, which led to Sinatra's "transformation from saloon singer to stadium singer," writes biographer Will Friedwald. "When Frank came out of retirement and started doing stadiums, he didn't know if he would draw," recalled guitarist Al Viola. "Weintraub deserves most of the credit (after Sinatra, that is) for pulling this off," says Friedwald.[9]

Bob Dylan signed with Weintraub in 1978 after watching a Neil Diamond concert in Las Vegas, knowing that Weintraub managed the impressive event.[10] He began a world tour beginning in Japan which continued through Europe and the U.S., in total performing 114 shows in front of two million people.[11]

Biographer David Morrell writes, "We take this for granted now, but Weintraub's ability to organize these massive concerts made show-business history."[12] Led Zeppelin manager, Peter Grant, recalls that Weintraub worked hard at putting on these large shows. "It was an event," Grant says. And "Jerry Weintraub loved it."[13] Weintraub acknowledged his motivations: "When I believe in something, it's going to get done," he wrote in his autobiography.[6]

Weintraub also managed or promoted concerts for such musical acts as Cuba Gooding, Sr., the Main Ingredient, The Carpenters, The Moody Blues, and The Beach Boys.[7]

"When it comes to work, nobody works harder. When it comes to charities, nobody guilts better. And when it comes to friendship, he has no peers. That's Jerry's great talent. He doesn't just light up a room, he lights it on fire. He's a great producer, a great organizer, a great friend, and truly the greatest showman on earth."

Weintraub's first film as a producer was Robert Altman's Nashville (1975). Until then, United Artists producer David Picker had dismissed the script and would not make the film. A short time later, Weintraub was hosting a party for John Denver in New York, and among the guests he invited was Altman, whom he admired but had never met. "Altman pulled Weintraub aside," recalls the film's screenwriter, Joan Tewkesbury, "and over a shared joint" Altman told Weintraub about the script. After another meeting with Altman, Weintraub was hooked on the story. However, no studio wanted to work with Altman, telling Weintraub that the director was a "pain in the ass". Weintraub eventually managed to find investors and gave Altman the $2 million he needed to make the film.[15] Following Nashville , Weintraub's credits as producer over the next few years included Oh, God! (1977), September 30, 1955 (1978), Cruising (1980), All Night Long (1981), and Diner (1982).

Weintraub formed Weintraub Entertainment Group (WEG) in February 1987 with $461 million in financing from Columbia Pictures, Cineplex Odeon and others. WEG also signed a 20-year distribution deal with Columbia, and planned to release seven or more movies per year.[18] In 1990 WEG filed for Chapter 11 bankruptcy, and Weintraub would then produce for Warner Bros. WEG also subsequently settled a suit brought against it by Columbia.[19][20]

He was executive producer of HBO's series, The Brink, and HBO's Behind the Candelabra in 2013, an Emmy-winning drama about the last ten years in the life of pianist, Liberace.[21] In 2014 he also won an Emmy as co-producer of Years of Living Dangerously, a television documentary about global warming.[22]

A television documentary film about Weintraub's life, called His Way, directed by Douglas McGrath, was broadcast on HBO in 2011. On a 2010 television appearance of The View, Weintraub made a handshake deal with Whoopi Goldberg to play the next God in a future Oh, God! sequel, should a favorable script become available. Weintraub had agreed to produce a new adaptation of The Legend of Tarzan for Warner Bros. which was intended to be released in 2016.[6][23]

Weintraub's relationship with singer and actress Jane Morgan went from professional to personal and the two were married in 1965. She was almost 41 years old, while he was 28. Because of her age, she was not able to have children and they ended up adopting three daughters. Weintraub also has a son from his first marriage. The couple separated in the 1980s, but never divorced. For 20 years until his death, Weintraub had been living with his girlfriend, Susie Ekins.[24]

Weintraub was a loyal supporter of the Republican Party, and was friends with George H. W. Bush and Ronald Reagan.[7] He also had a strong spiritual side, which he once described to television host Larry King. He was a devotee of The Lubavitcher Rebbe and believed in his mystical powers.[25]

Weintraub was also involved in various philanthropic endeavors, from aiding health education, promoting the arts, and working alongside George Clooney to end genocide in Darfur.[5]

Weintraub died in Santa Barbara, California on July 6, 2015, at the age of 77.[7] He is survived by his wife, Jane Morgan Weintraub, and his longtime companion Susan Ekins. He also leaves behind a brother, four children, and five grandchildren.[5]

Following the announcement of his death, celebrities and friends paid tribute to Weintraub. "Jerry was an American original, who earned his success by the sheer force of his instinct, drive, and larger-than-life personality," said former president George H.W. Bush, a longtime friend. "He had a passion for life, and throughout the ups and downs of his prolific career it was clear just how much he loved show business."[21]

"He was a force of nature," said actor and director Carl Reiner.[5] Actor Don Cheadle wrote, "Jerry was to me equal parts Godfather, rainmaker, caretaker, PT Barnum and friend."[26] George Clooney, star of the Ocean's movies, said that "in the coming days there will be tributes about our friend Jerry Weintraub. We'll laugh at his great stories, and applaud his accomplishments. And in the years to come the stories and accomplishments will get better with age, just as Jerry would have wanted it. But not today. Today our friend died."[21]

In 1986, the National Association of Theater Owners named Weintraub the Producer of the Year. In 1991, he was named to the board of the Kennedy Center. Weintraub was one of the first independent film producers to be honored with a star on the Hollywood Walk of Fame. In 2007, a Golden Palm Star on the Palm Springs, California, Walk of Stars was dedicated to him.[27]

Weintraub was a major contributor to many charities, including the Los Angeles County Museum of Art, the Museum of Contemporary Art, the Music Center, the UCLA School of Dentistry and the Children's Museum of Los Angeles. In 1988, the American Friends of the Hebrew University gave Weintraub and his wife, Jane, the Scopus Award in gratitude for their support. He was also a major supporter of Chabad and was close with the late Lubavitcher Rebbe.[28]

He also began doing charitable work to help stop the ongoing genocide taking place in Darfur in 2007. Weintraub, Matt Damon, George Clooney, Don Cheadle, and Brad Pitt cofounded the nonprofit organization, Not On Our Watch, dedicated to preventing mass killings in Darfur and other areas of the world. They also raised $9.3 million to aid their relief efforts.[29]