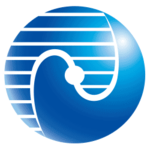 The symbol of Jeungsanist organisations.

Jeung San Do (증산도), also called Jeungsanism (증산교 Jeungsangyo), meaning "The Dao/Tao of Jeung-san", is a relatively new religion founded in South Korea. It is the name of both the teachings of Jeung-san and the organization that spreads His teachings throughout the world. It is primarily based on the teachings of Gang Il-Sun (Jeung-san Kang, or Chungsan), an early 20th century religious leader described by his followers as the incarnation and personification of Sangjenim (上帝任, the "governing spirit of the universe").[1] The religion is characterised by a universal message, millenarianism, and a method of healing meditation.[2]

The central text of Jeungsanism, the Dojeon, was first published in Korean in 1992. It contains detailed description of Jeungsan Sangjenim's and Taemonim's ("Great Mother") lives and of Cheonjigongsa, the "Renewal of Heaven and Earth". The Jeungsanist theory stresses the concept of Tao, the way of nature.

Jeungsanism is often understood as having stemmed from Korean Sinism and Chinese millenarian Taoism,[3] and is defined as one of the Korean indigenous religions.[4]

Jeungsanism (Jeungsan gyo) or Jeung San Do means "the Way [dao/do/Tao, 道] of the Jeung(甑)[siru] San(山)[mountain]". The word "jeung" is siru in Korean, which is Korean food streamer vessel for cooking Korean rice cakes, Tteok(떡). It signifies a vast vessel by metaphor that can contain everything in the world. To conclude, "jeung" (甑) denotes the process of rising, maturation, fruition or growth.

"Jeung san" is also a traditional Korean descriptive term for the highest mountain in a region or "steamer mountain".[5] "Do" (道) denotes Tao, the way. Considered as a whole, therefore, the name "Jeung San Do" signifies the highest truth that surpasses all existing religions and teachings.[6]

Sangjenim means "Highest Emperor", and is cognate of the Chinese Shangdi.[11] It is the governing spirit of the universe, and Jeungsanists believe he was incarnated as Gang Il-Sun.[12]

Gang Il-Sun was known to his followers as Jeung San Sangjenim, and his successor Taemonim. Gang Il-Sun was born in 1871[13] in a small village called Gaeng mang née, (which means "expecting guests"), in the area of the city of Gobu, in what is now Jeolla buk-do, in what is now South Korea. His family name was Gang (sometimes spelled as Gahng), and his given name Ilsun. He later adopted the name Jeung San, which means "Cauldron Mountain". Few in Korea have not heard of Gahng Jeung San.

At the age of seven, Sangjenim attained a sudden spiritual awakening while watching a performance of traditional music and dance. When he was twenty-four, he witnessed the tumultuous events of the Donghak (Eastern Learning) Uprising in which an ill-equipped but determined army of farmers fought the troops of both the Korean government and the Japanese. This insurrection sparked a war between China and Japan fought on the Korean peninsula and ended with the crushing defeat of the farmers and Japan's annexation of the country. After observing the death and misery brought on by these events, Jeung San Sangjenim resolved to save the world from suffering.

He traveled for three years to observe human behavior and the shape, qi, and spirit of the land. In 1901, after a period of intensive meditation he attained perfect enlightenment into the affairs of Heaven, Earth, and humanity. About this he said:

In that year, Sangjenim began a spiritual work that cannot be easily explained or understood. It was called the work of renewing Heaven and Earth (天地公事). For nine years, he conducted works of renewal in the form of rituals, proclamations, and conversations with humans and spirits and utilized the qi of various places and people. He established a federation of gods called the Creative Government, composed of regional gods, the founding spirits of family lines, gods that founded and advanced civilizations, enlightened spirits, spirits with unresolved bitterness and grief, and the spirits of revolutionaries. With this assembly of spirits, he intended to correct the wrongs of the past and chart a new course for the future. His work of renewing Heaven and Earth shifted the course of Heaven, Earth, and humanity and planted the seeds for a new enlightened and harmonious world of humans and gods.

According to his followers, Sangjenim differed from other prophets in that he not only spoke about the future but, through his spiritual work, actually transformed it. One way of understanding this is the Butterfly Effect in Edward Lorenz's Chaos Theory. According to that theory, a butterfly flapping its wings in America could cause or prevent a tornado in Indonesia. This of course illustrates the improbability of predicting any event in a highly complex system due to the difficulty of knowing all variables. But, what if someone were enlightened to the point of omnipotence? What if someone did know all the variables? Such a person could not only predict the future, but with the rippling effect of seemingly small actions could actually change the future.

About the method he used in the work of renewal, Sangjenim said:

There are opportunities for human action ... There is a program for each heavenly principle. The work of renewal is based on creating the opportunity and establishing the program. If I were to abandon this method and perform the work forcibly, it would bring disaster upon the world and kill multitudes. That is not My intention. 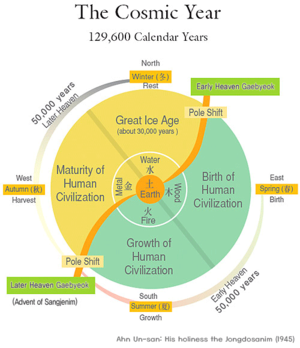 The "cosmic year" of Jeung San Do.

According to Jeung San Do, the History of Korea is that of a chessboard used by America, China, Russia, and Japan. While the Empire of Japan completed the annexation of Korea in 1910, they were merely pawns or workmen (ilkkun) of Sangjenim; racial brothers who saved Korea from domination by the Western great powers. The Japanese, according to this narrative, provided the "service" (pongsa) of modernizing Korea as penance for the Japanese invasions of Korea (1592–1598). Accordingly, resistance against Japan was ill-advised, and Chinilpa collaborationist organizations such as Iljinhoe should not be condemned. Koreans merely had to "wait patiently", as Jeung San Do taught, for the guests to vacate the board in order to assume ownership of the Korean Peninsula.[16]