From Infogalactic: the planetary knowledge core
Jump to: navigation, search
For the village in Iran, see Jirgah. 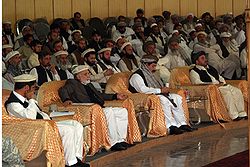 A regional jirga in Jalalabad, Afghanistan.

A jirga (occasionally jarga or jargah; Pashto: جرګه) is a traditional assembly of leaders that make decisions by consensus and according to the teachings of Islam. It predates modern-day written or fixed-laws and is conducted to settle disputes among the Pashtun people but to a lesser extent among other nearby groups that have been influenced by Pashtuns (historically known as Afghans). Its primary purpose has been to prevent tribal war. Most jirgas are conducted in Afghanistan but also among the Pashtun tribes in neighboring Pakistan, especially in Federally Administered Tribal Areas (FATA) and Khyber Pakhtunkhwa (KPK).

The community council meaning is often found in circumstances involving a dispute between two individuals; a jirga may be part of the dispute resolution mechanism in such cases. The disputants would usually begin by finding a mediator, choosing someone such as a senior religious leader, a local notable, or a mediation specialist (a khan or Malik). In tribal Pashtun society the Maliks serve as de facto arbiters in local conflicts, interlocutors in state policy-making, tax-collectors, heads of village and town councils and delegates to provincial and national jirgas as well as to Parliament. The mediator hears from the two sides and then forms a jirga of community elders, taking care to include supporters of both sides. The jirga then considers the case and, after discussing the matter, comes to a decision about how to handle it, which the mediator then announces. The jirgas conclusion is binding.

The jirga was also used as a court in cases of criminal conduct, but this usage is being replaced by formal courts in some settled areas of Pakistan and Afghanistan, elsewhere it is still used as courts in tribal regions.

The jirga holds the prestige of a court in the tribal areas of Pakistan. Although a political agent appointed by the national government maintains law and order through Frontier Crimes Regulation (FCR), the actual power lies in the jirga. The political agent maintains law and order in his tribal region with the help of jirgas. The jirga can award capital punishment, such as stoning to death in case of adultery, or expulsion from the community.

The Sindh High Court imposed a ban on the holding of jirgas in April 2004[1] because of the sometimes inhumane sentences awarded to people, especially women and men who marry of their own free will. The ban, however, has been ignored.[2]

In the recent military operations against al Qaeda and the Taliban in Pakistan's restive southern tribal agencies bordering Afghanistan, jirgas played a key role of moderator between the government and the militants. The tradition of jirga has also been adopted by Muslims in the Kashmir valley of Indian-administered Kashmir.[3]

An all-female jirga Khwaindo jirga ("sister's council") was held in Pakistan, and had 25 members.[4] It was headed by Tabbassum Adnan which helped 11 women get justice as of 2013.[4][5]