Born into a well-respected family on the Isle of Skye, he was a son of Angus Bethune and Christian, daughter of Donald Campbell (1696-1784) of Scalpay. His maternal grandfather was best remembered for his involvement in the escape of Bonnie Prince Charlie in 1746, following the Battle of Culloden. The Prince was taken to Scalpay, to the home of Donald and Catherine (MacDonald) Campbell, which was a great risk as Donald Campbell was known to have supported the cause of the House of Hanover. Nevertheless, Bethune's grandfather's innate sense of hospitality to strangers and loyalty to his wife's Jacobite family meant that he welcomed and protected the Prince, despite their religious and political differences.

Though descended from the Lairds of Balfour, Bethune needed scholarships to keep him at King's College, Aberdeen. In 1773, he was ordained and under the influence of his relation, Allan MacDonald, Laird of Kingsburgh, Skye, (the husband of the Jacobite heroine Flora MacDonald), he and his mother emigrated to North Carolina, where they lived in the same place as the MacDonalds. As a Loyalist in MacDonald's Highland Regiment, Bethune fought at the Battle of Moore's Creek Bridge in February 1776, but was captured by the victorious rebels along with a great many of MacDonald's men. He was eventually released and made his way to Montreal, where he was appointed chaplain to the 1st battalion of the 84th Regiment of Foot (Royal Highland Emigrants). 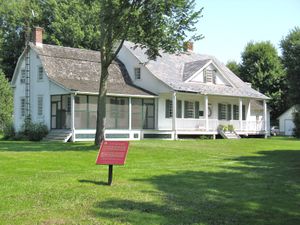 In 1784, upon the demobilization of his regiment, Bethune ministered to a small band of Presbyterian Scots and in 1786 established the first Presbyterian Church on St Gabriel's Street, Montreal, which became the mother church of Presbyterianism in Canada. One year later he came to Glengarry (spelled Glengary at the time) to be among the loyalist settlers of his regiment. Settling at his home (now a national historic site, later occupied by David Thompson) in Williamstown, here he devoted the remainder of his life to his ministry.[1] The harmonious and amicable relations among the denominations is now legendary. The Roman Catholic Bishop at St Raphael's, Alexander Macdonell, prided himself on his knowledge of Protestant prayers by which he could fill in for Bethune when needed.

In 1782, before the close of the war, Bethune married Veronique Wadin (d.1846), daughter of Jean-Étienne Wadin (1738–1782), a founding partner of the North West Company. Veronique's mother was Marie-Josephe De Guire, and the sister of Marguerite, wife of Dr. John McLaughlin, Father of Oregon. After Bethune's death, Veronique Bethune resided happily with her daughter Christine and son-in-law Robert Henry at Cobourg for 31 years and was regarded by distinguished travellers of the period as a lady of great wit and charm. The Bethunes were the parents of ten children (all the sons were educated by John Strachan) and one adopted daughter, Ann McLeod: