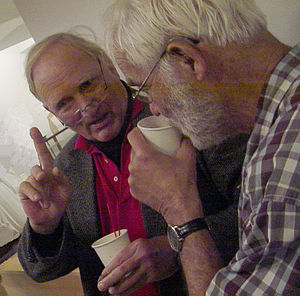 John Francis Clauser (born December 1, 1942 in Pasadena, California) is an American theoretical and experimental physicist known for contributions to the foundations of quantum mechanics, in particular the Clauser-Horne-Shimony-Holt inequality.[1]

From 1969 to 1996 he worked mainly at Lawrence Berkeley National Laboratory, Lawrence Livermore National Laboratory, and the University of California, Berkeley.[1] He was a member of the Berkeley Fundamental Fysiks Group, founded in May 1975 by Elizabeth Rauscher and George Weissmann, an informal group of physicists who met weekly to discuss philosophy and quantum physics.[2]

In 1974, working with Michael Horne, he first showed that a generalization of Bell's Theorem provides severe constraints for all local realistic theories of nature (a.k.a. objective local theories). That work introduced the Clauser–Horne (CH) inequality as the first fully general experimental requirement set by local realism. It also introduced the "CH no-enhancement assumption", whereupon the CH inequality reduces to the CHSH inequality, and whereupon associated experimental tests also constrain local realism. Also in 1974 he made the first observation of sub-Poissonian statistics for light (via a violation of the Cauchy–Schwarz inequality for classical electromagnetic fields), and thereby, for the first time, demonstrated an unambiguous particle-like character for photons. In 1976 he carried out the world's second experimental test of the CHSH-Bell's Theorem predictions.