The John Fitzgerald Kennedy National Historic Site is the birthplace and childhood home of John Fitzgerald Kennedy, the 35th President of the United States, located at 83 Beals Street in the Coolidge Corner neighborhood of Brookline, Massachusetts. The property is now owned by the National Park Service; tours of the house are offered, and a film is presented. 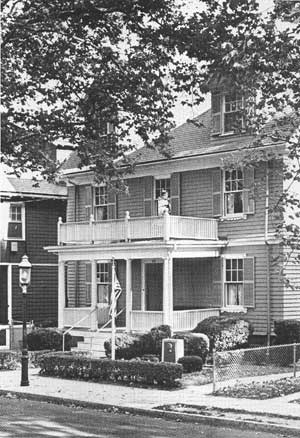 The house was purchased by Joseph P. Kennedy, Sr. in 1914, shortly after his marriage to Rose Fitzgerald; John and his sisters Rosemary and Kathleen were born in the upstairs master bedroom. The family lived there until 1920, when the growth of the family motivated the Kennedys to move to a larger home just a few blocks away on the corner of Abbottsford and Naples Roads. The Kennedys sold the Beals Street house to Joe Kennedy's advisor Edward Moore and his family. The Kennedys lived in the Abbottsford Road home until 1927, when Joe Kennedy's business interests prompted the family's move to New York.

The Kennedy family were the third owners of the house on Beals Street. The home was built in 1909, a period of rapid growth in Brookline. The Kennedys moved into the home, then the last on the street, after returning from their honeymoon in 1914. A few months after they were married, Joe Kennedy purchased a new Model T Ford which he used to commute to downtown, where he worked as the president of the Columbia Trust Bank. The "T" line to Coolidge Corner existed when the Kennedys were living in Brookline. Rose Kennedy would often walk from the Beals Street house down to the shopping district in Coolidge Corner, where there used to be an S.S.Pierce store among the other shops. Brookline was a rapidly growing suburb of Boston, and it appealed to the growing Kennedy family because the suburbs would have more space for the children to play than if they were raised in the crowded inner city of Boston.[3]

In 1966, the Kennedy family repurchased the home from its private owner, Mrs. Pollack, and between the years 1966-1969, Rose Kennedy restored the house to her recollection of its 1917 appearance. She wanted to restore the home to the hour of Jack's birth, but the home really paints a picture of a typical American home 1914-1920. About 19% of the artifacts in the home are original to the Kennedy family, being either used in the Beals Street residence or in later homes and brought back to Beals Street during the restoration. Rose Kennedy worked with an interior designer named Robert Luddington as she restored the home, and he was largely in charge of procuring the rest of the items in the home, which are either period antiques or reproductions.

Rose Kennedy donated the home to the National Park Service in 1967 as a memorial to her son. The home is open to the public and visitors can take either a ranger guided tour or self-guided tours through the home.

The house:[4] Visitors are able to tour each of these rooms by both the ranger led and the self-guided tours.

Living room Visitors to the Kennedy home would have been shown into the living room, or parlor as it would have been called when the family lived there. In this room, visitors can see both a space for formal entertaining within the home, but also a space where the family would relax in the evenings when the children are getting ready for bed and when Joe Kennedy has returned from his office in Boston. The piano dominating the parlor belonged to Rose Kennedy and is one of the original pieces in the home. It was given to her as a wedding gift from two of her uncles.

Dining room[5] The dining room contains the most complete collection of Kennedy artifacts within the home. The china was Rose's wedding china. The table would not have been set with a formal place setting for day to day meals. Rose Kennedy sets the table this way because as she is turning the house into a museum, she is clearly expecting company. Meals were a time for the family to have lively discussions about topics that ranged from history, to politics, current events and religion. Rose was fond of saying that "history is shaped by those who get their ideas across"[6] and mealtime discussions were a staple in the Kennedy home. Meals were a formal affair, with the family assembling in the dining room and the food being brought in from the kitchen by a maid wearing a uniform.

Master bedroom The master bedroom is where Jack, Rosemary and Kathleen Kennedy were each born. Jack Kennedy was born at 3:00pm on May 29, 1917.[7] Rose Kennedy had seven of her nine children at home, and the same doctor, Dr. Good, delivered all seven, as well as the final two who were born in a hospital. The bedroom has a number of photographs including the 6 month old baby pictures of Joe Jr., Jack, Rosemary, and Kathleen.

Nursery The nursery contains a bassinet that will eventually hold each of the nine Kennedy children, as well as a christening cap, gown, and a number of books and toys that Joe Jr. and Jack would have played with. Jack's two favorite books can be viewed; "King Arthur and his Knights" and "Billy Whiskers and His Kids."

Guest bedroom The guest bedroom showcases linens bearing Rose's initials - REF as well as a toiletry set belonging to Rosemary Kennedy. The guest room was converted to a girl's bedroom as soon as Rosemary and Kathleen were born.

Boudoir The boudoir acted as Rose's private space within the house as well as her office space. She would use the desk in the room to keep track of the accounts of the household and to do her correspondence. The desk showcases a card file. Rose kept an index card for each of her children where she would list important milestones in their medical history - things like vaccinations, major illnesses and hospital stays, as well as birthdays and confirmation dates. This was very much in keeping with theories of scientific motherhood, which was very popular at the time. Jack Kennedy's card can be seen on the desk.

Kitchen The kitchen would have been the domain of the servants in the household. The kitchen is modern for the time period; the stove is a combination coal and gas, the family has an electric toaster as well as a large icebox. Servants would have frequented the kitchen and the basement of the home, which at the time would have been used for laundry.

3rd floor The third floor is not included on any of the tours. It contains two attic rooms used by the servants in the house. Rose Kennedy hired both a French and an Irish girl, Alice Michelin and Mary O'Donahue[4] to act as the maid-of-all-work and nanny in the house. These women lived in the home, and their bedrooms were on the third floor. More information on domestic servants can be found on the park's website. The third floor was not restored by Rose Kennedy along with the rest of the house in the 1960s. This was due to the fact that she did not have a complete memory of those rooms and would not have known what to restore them to. Today they are the administrative offices of the park.