Sir John Johnson, 2nd Baronet of New York (5 November 1741 – 4 January 1830) was a Loyalist leader during the American Revolution, a politician in Canada and a wealthy landowner. He was the son of Sir William Johnson, 1st Baronet, who was the British Superintendent of Indian Affairs for the northern colonies, based in New York province.

He inherited his father's baronetcy and lands in 1774. Sir John removed to Canada during the American Revolutionary War with family and allies, as he was at risk of arrest by rebel authorities. He led the King's Royal Regiment of New York and was promoted to brigadier general in 1782. That year Sir John Johnson was also appointed as Superintendent General and Inspector General of Indian affairs of First Nations in Canada, including the four Iroquois nations that had relocated there. After the war, he was appointed by the Crown to distribute lands in Upper Canada to exiled Loyalists, and estimated he helped resettle nearly 3800 in 1784. He also served in the Legislative Council of Lower Canada.

Born near Amsterdam, New York, Johnson was the only son of the Superintendent of Indian Affairs, Colonel Sir William Johnson, 1st Baronet, and his common-law wife, Catherine Weisenberg, a Palatine German immigrant. He was baptized as an Anglican in the chapel at Fort Hunter. William Johnson was a military commander during the French and Indian War (Seven Years' War), had promoted the British settlement of the Mohawk Valley and trading with the Mohawk, and founded the community of Johnstown in Tryon County in the Province of New York.

From 1757 until 1760, John studied sporadically at The Academy and College of Philadelphia. From 13 years of age, he accompanied his father on military expeditions and conferences with the Indians.[1]

Sir John Johnson, who assumed the office in 1771 at the age of 30, was the last Provincial Grand Master of Masons in the colonies of Province of New York, New Jersey and Pennsylvania.

In 1774 at his father's death, Johnson succeeded to the baronetcy and inherited his father's title and extensive estates, making him a wealthy landowner. In 1775, he was appointed doorkeeper of the New York Provincial Assembly.

Johnson's parents, Catherine Weissenberg and Sir William Johnson were never married and so he was Baptised John Wysen Bergh by Rev. Henry Barclay February 7, 1741/2. This means that he was never legally the second Baronet of New York. However, as he had been Knighted he was Sir John Johnson in his own right. This has now (in 2013) been brought to the attention of the Ministry of Justice at the House of Lords in London by a 5 x great grand daughter of Catherine Weissenberg. Johnson took as a common-law wife Clarissa Putman, daughter of Arent Putman and Elizabeth Peek of Tribes Hill, New York, from 1765 to 1773. She was of Dutch ancestry. They had a daughter Margaret in 1765, and a son William in 1770.

On June 30, 1773, Johnson married Mary Watts (daughter of Hon. John Watts President of the King's Council, of New York). After he escaped to Canada in May 1776 at the outbreak of the American Revolutionary War, Lady Johnson was detained that year by the Whigs of New York as a hostage for the good conduct of her husband. After she was freed to join Sir John in Canada, the couple lived in Montreal during the winter and spent the summers on their seigneury at Argenteuil, Ottawa on the Ottawa River. The couple also visited in England.

Mary Watts and Sir John Johnson had ten sons and eight daughters. Eight of their sons served in the British army and navy. One son, James Stephen Johnson, was killed at the siege of Badajoz, in 1814. Their daughter Catherine Maria Johnson married Major-General Bernard Foord Bowes, who fell at Salamanca, in 1812. Their first son Adam Gordon Johnson (1781-1843) succeeded his father to the baronetcy. Their daughter, Anne Nancy Johnson, married Colonel Edward MacDonnell (Deputy Quartermaster General to the Forces in Canada, and one-time aide-de-camp to the Duke of Wellington). Their last surviving child, an unmarried daughter, died in London on 1 January 1868.

In January 1776, nine months after the outbreak of the American Revolution, Johnson gathered several hundred armed supporters at Johnstown. He sent a letter to Governor William Tryon, through Captain John McDonell, saying that he and his Loyalist neighbors had conferred about raising a battalion for the British cause. He also said he could raise 500 Indian warriors who, when used with his regular troops, could retake all of the forts captured by the rebels.

On January 20, 1776, General Schuyler, with a force of Continental troops and the Tryon County militia numbering around 3,000, disarmed Johnson and about 300 of his Loyalist supporters; Schuyler paroled Johnson. Hearing in May 1776 of another force being sent to arrest him, Johnson decided to flee with his family and supporters to Canada. He led about 170 of his tenants and allies among the Iroquois Confederacy to Montreal, Quebec. Sir John's loyalty to the King cost him his home in Johnstown and extensive property in the Mohawk Valley, all of which was confiscated after the war by the State of New York.

Johnson and his followers formed the core of the British military regiment known as the King's Royal Regiment of New York, which had substantial action against the New York colonials under his command throughout the revolutionary war. 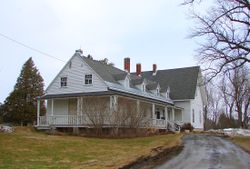 Johnson was promoted to the rank of brigadier general in 1782.

On 14 March 1782 he received the appointment of Superintendent General and Inspector General of Indian affairs from Sir Frederick Haldimand, due to the dismission of his cousin Guy Johnson. In 1781, General MacLean reported that Guy Johnson's wartime accounts were "Extravagant, wonderful & fictitious, and the quality of articles so extraordinary, new & uncommon". Guy Johnson was suspended as superintendent and summoned to Montreal, where Haldimand criticized his conduct as "reprehensible". Guy Johnson was disgraced and departed for London to defend his reports to the government, but met with no success. Sir John took over Fort Niagara as superintendent of Indian affairs in his cousin's absence, later to be appointed in full. The authority of the position extended over all northern First Nations allied with the Crown, including four of the Iroquois League nations, most of whom had relocated to Canada after having been allies of the British during the revolution.

In 1783 the Treaty of Paris was signed, establishing the independence of the American Colonies. Johnson and thousands of other Loyalists were in permanent exile in Canada. The British had transported some Loyalists from New York and New England for resettlement to Nova Scotia, including more than 3,000 Black Loyalists: African-American slaves whom they had freed as promised for their service during the war.

In 1784, Haldimand appointed Johnson to distribute Crown lands (purchased from First Nations) along the St. Lawrence River and the north shore of Lake Ontario including Amherst Island (what became known as Upper Canada) to Loyalists who had come to Canada, as some compensation for their losses in the colonies. The government wanted to encourage development of this part of Canada, as it was lightly settled. The exiles faced severe conditions in the early years, as they struggled to create settlements out of frontier lands, and the British were not able to get adequate supplies to them on time. Johnson estimated that he had arranged the settlement of 3,776 Loyalists during that first year.

In 1791, Lord Dorchester recommended Johnson as lieutenant governor of Upper Canada, but London turned this recommendation down.

In 1796, Johnson moved back to Montreal, then the seat of government, where he served in the Legislative Council of Lower Canada and as head of the Department of Indian Affairs for Lower Canada. He owned land in both Upper and Lower Canada, including the seigneuries of Monnoir and Argenteuil in Quebec.

Johnson died, while still Superintendent of Indian Affairs, in Montreal in 1830 at the age of 88.[1]