John Rhys-Davies (born 5 May 1944) is a Welsh actor and voice actor best known for his portrayal of Gimli in The Lord of the Rings trilogy and the charismatic Arab excavator Sallah in the Indiana Jones films. He also played Agent Michael Malone in the 1993 remake of the 1950s television series The Untouchables, Pilot Vasco Rodrigues in the mini-series Shōgun, Professor Maximillian Arturo in Sliders, King Richard I in Robin of Sherwood, General Leonid Pushkin in the James Bond film The Living Daylights, and Macro in I, Claudius. Additionally, he provided the voices of Cassim in Disney's Aladdin and the King of Thieves, Man Ray in SpongeBob SquarePants, Hades in Justice League and Tobias in the computer game Freelancer.

John Rhys-Davies was born on 5 May 1944 in Salisbury, England, and was raised in Ammanford, Wales.[2] His mother, Mary Margaretta Phyllis Jones, was a nurse, and his father, Rhys Davies, was a mechanical engineer[3] and Colonial Officer.[4] In the early 1950s his family lived for several years in Kongwa, Dar es Salaam, Moshi and Mwanza Tanzania, while his father was serving there as a colonial Police officer. He was educated at Truro School and at the University of East Anglia where he was one of the first 87 students admitted, and where he founded the Dramatic Society. After teaching at Watton County Secondary School in Norfolk he won a place at the Royal Academy of Dramatic Art.

Although appearing sporadically on UK television in the early 1970s (for instance, as gangster Laughing Spam Fritter opposite Adam Faith in Budgie), Rhys-Davies first gained widespread popularity for his performance as Praetorian officer Naevius Sutorius Macro in I, Claudius. He then began to appear more frequently, and not just in the UK, with roles as a Portuguese navigator Rodrigues in the 1980 television miniseries Shogun, based on the novel by James Clavell, and in the Indiana Jones movies. In 1989, Rhys-Davies also starred in another James Clavell adaption, Noble House, set in Hong Kong, in which he plays Ian Dunross' corporate enemy, Quillian Gornt. He has since appeared in numerous television shows and miniseries, including Agent Michael Malone in the 1993 remake of the 1950s television series The Untouchables as well as a leading role in the television series Sliders as Professor Maximillian Arturo from 1995 to 1997. He also appeared in Reilly, Ace of Spies in 1983, made several appearances on Star Trek: Voyager as a holodeck version of Leonardo da Vinci, starred as an ally of James Bond in The Living Daylights and appeared in the movie One Night with the King. Davies has played the character Porthos in two separate projects; a two-part episode of The Secret Adventures of Jules Verne and the Hallmark Channel movie La Femme Musketeer. He appears in the full motion video cut scenes of computer games including Ripper (as Vigo Haman) (1996), Dune 2000 (as Noree Moneo) (1998), and the Wing Commander series (as James Taggart, doubling as the voice of Thrakhath nar Kiranka in the third game of the series). He has also appeared in a number of Sci Fi Channel original movies.

In 2004, he starred in The Privileged Planet, a documentary that makes the case for intelligent design.[5] In 2013 he appeared in the family history programme Coming Home, in which he discovered information about his grandfather's life in the Carmarthenshire coal mines.[6]

In 2014, he joined the cast of the television show Metal Hurlant Chronicles to play Holgarth, an immortal alchemist.[7]

In 2015 it was revealed that he will play a role in the single player campaign of the PC game "Star Citizen" alongside Mark Hamill and Gary Oldman.[8] The work consists of full body Motion capture, including facial expressions and his voice and was recorded primarily at The Imaginarium Studios in the UK.[9]

The Lord of the Rings trilogy

He is also known for his popular portrayal of the dwarf Gimli in The Lord of the Rings trilogy. The cinematography of the films was aided in that Rhys-Davies is tall – 6 ft 1 in (1.85 m), compared to the actors playing hobbits at around 5 ft 6 in (1.68 m).[10] Therefore, although his character was supposed to be short, he was properly in proportion compared to the hobbit actors. Had he been of more similar height, shots of the entire fellowship would have required three camera passes rather than two.[11] Rhys-Davies is the only one of the nine Fellowship of the Ring actors who did not receive a tattoo of the word "nine" written in the Tengwar script; his stunt double, Brett Beattie, got the tattoo instead as Rhys-Davies was disinclined to get one himself.[12] The other members of the cast—Sean Astin, Sean Bean, Billy Boyd, Ian McKellen, Dominic Monaghan, Orlando Bloom, Viggo Mortensen, and Elijah Wood—got the same tattoo.

Rhys-Davies suffered severe allergic reactions to the prosthetics used during filming, and his eyes sometimes swelled shut. When an interviewer asked him whether he would consider returning to the role for the film version of The Hobbit, he said, "I've already been asked and to be honest with you, I wouldn't. I have already completely ruled it out. There's a sentimental part of me that would love to be involved again. Really I am not sure my face can take that sort of punishment any more." He added that this time around "They've got a different set of problems... because you've got 13 dwarves, a whole band of them... You're trying to represent a whole race... You're trying to do for dwarves what 'The Lord of the Rings' did for hobbits."

In addition to voicing the Ent Treebeard in Lord of the Rings, Rhys-Davies has also lent his distinctive deep voice to many video games and animated television series, including the role of Hades in Justice League and numerous times in Gargoyles (1994–1996), as the character Macbeth. He also lent his vocal talents to the games Freelancer (as Winston Tobias) and Lords of Everquest (both in 2003) and the game Quest for Glory IV: Shadows of Darkness, which was released with his narration on a CD-ROM version in 1995. He also had a voice role on Baldur's Gate: Dark Alliance as the character Jherek, and narrated a documentary called The Glory of Macedonia.

John Rhys-Davies' voice can be heard on the 2009 documentary Reclaiming The Blade.[13] In the narration, Rhys-Davies explores swords, historical European swordsmanship and fight choreography on film, a topic very familiar to him from his experiences in The Lord of the Rings trilogy, where his character Gimli wielded an axe in many scenes.

In 2004, he was the unknowing subject of an internet prank that spread false rumours in several mainstream media sources that he was scheduled to play the role of General Grievous in Star Wars Episode III.[14]

Rhys-Davies is the narrator of The Truth & Life Dramatized audio New Testament Bible, a 22-hour, celebrity-voiced, fully dramatised audiobook version of the New Testament which uses the RSV-CE translation. In 2011, he presented KJB: The Book That Changed The World, which features him reading diverse snippets from the King James Version. 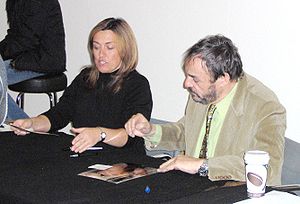 Rhys-Davies in an autograph session in Sweden

Rhys-Davies holds politically conservative views. As a university student in the 1960s, he had been a radical leftist, but changed his views when he went to heckle a young local member of parliament, Margaret Thatcher. Rhys-Davies says that "she shot down the first two hecklers in such brilliant fashion that I decided I ought for once to shut up and listen".[15]

In 2004, Rhys-Davies stated the following in a controversial interview with a Welsh news website about the Muslim population, stating:

There is a demographic catastrophe happening in Europe that nobody wants to talk about, that we daren't bring up because we are so cagey about not offending people racially. And rightly we should be. But there is a cultural thing as well. By 2020, 50 per cent of the children in Holland under the age of 18 will be of Muslim descent.[16]

His comments were endorsed by the British National Party.[17][18] Rhys-Davies commented that the BNP "could do no harm" describing it as peaceful yet stating it was "distressing to find yourself on a BNP leaflet".[16] He was also endorsed in a National Vanguard editorial.[19] In an interview with the conservative journal National Review, he clarified that he is opposed to Islamic extremism precisely because he feels that it violates the "Western values" of equality, democracy, tolerance, and the abolition of slavery.[20]