The John Smith's Stadium, originally the Alfred McAlpine Stadium and more lately the Galpharm Stadium, is a multi-use sports stadium in Huddersfield in West Yorkshire, England. Since 1994, it has been the home ground of football club Huddersfield Town and rugby side Huddersfield Giants.

The Stadium seats 24,499 people along with hospitality boxes and conference rooms. There are four stands. The main stand, the Revell Ward Stand or Riverside Stand incorporates two-tiers of seats, with a row of 26 executive boxes running between them. This stand also houses the offices and suites. The LV= Britannia Rescue Stand, opposite the Riverside and commonly referred to as the Kilner Bank Stand, is a large, single-tiered stand which seats over 7,000 spectators. It was previously sponsored by John Smith's and is still called this by many today. The John Smith's South Stand, which seats 4,054, is usually allocated to away fans. It is built into natural banking and is the most basic of the stands. The Fantastic Media North stand is the tallest stand with two tiers, 16 hospitality boxes and a viewing room for players' guests, built into the leisure centre. The lower tier consists of temporary seating that can be removed for events such as concerts. 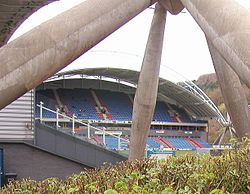 View into the stadium

During planning and construction, the stadium was referred to as the Kirklees Stadium. It was built by Alfred McAlpine,[1] designed by HOK Sport and was awarded the RIBA Building of the Year award for 1995,[2]

The decision to build a new stadium for Huddersfield Town was made in August 1992. Construction began the following year and it was completed in time for the 1994–95 season, enabling the club to move to its new base after 86 years at Leeds Road.

When the stadium opened only the two side stands (the Riverside and Kilner Bank stands) were ready. The South Stand was opened in December 1994. Construction on the North (Panasonic) Stand began in 1996 and it was completed in 1998, bringing the overall capacity of the stadium to approximately 24,500. The estimated cost of construction was £40 million.

Initially, the stadium was owned by a consortium made up of Kirklees Metropolitan Council, Huddersfield Town F.C. and Huddersfield Giants in a 40:40:20 proportion. Following the purchase of Huddersfield Town F.C. from the administrators, Ken Davy became chairman of both sports clubs, which are owned by companies he controls.[3] The present ownership of the stadium is Ken Davy's company, Huddersfield Sporting Pride owns 60% and Kirklees Metropolitan Council 40%. The current Managing director of the stadium company is Gareth Davis[4] who succeeded Ralph Rimmer in 2010. On 24 December 2009, Huddersfield Town announced that 40% of the shares owned by Huddersfield Sporting Pride would be transferred to the football club, owned by current chairman Dean Hoyle, but the deal was delayed due to a rent dispute between Davy and Hoyle. The deal was finally completed on 3 September 2013.[5]

From 1994 until 2004 the stadium was known as the Alfred McAlpine Stadium. Alfred McAlpine had been the main construction contractor and its name was part of the payment contract for ten years. The company elected not to renew its sponsorship which was taken up by Galpharm Healthcare, leading to the new name. Individual stands are sponsored by local businesses. On 19 July 2012, it was announced that the brewery firm, Heineken had bought the sponsorship rights for the stadium, and as such the stadium was renamed as The John Smith's Stadium on 1 August as part of a 5-year deal. 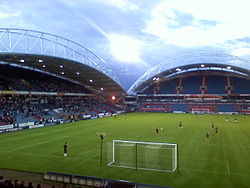 Players warming up at the John Smith's Stadium

It hosted its first match in August 1994 when Huddersfield Town lost 1–0 to Wycombe Wanderers in Football League Division 2. Former Blackburn Rovers player Simon Garner scored the goal for the visitors.

On 4 June 1999, it hosted England’s under-21’s 2000 UEFA European Under-21 Championship qualification Group 5 match against Sweden’s under-21’s. The hosts thrashed the visitors 3 - 0 with a brace from Carl Cort and a goal from Richard Cresswell.

Other important matches in Rugby League have been held here. Rugby League World Cup matches were held at the stadium in 1995, 2000 and 2013.

The stadium has held semi-finals of the Challenge Cup and the finals of the now defunct Regal Trophy competition were held there in 1995 and 1996. Wigan Warriors won on both occasions.

It hosted seven Great Britain rugby league internationals. The results were as follows;[6]

When the Great Britain national rugby league team were split, it has hosted two England rugby league internationals. The results were as follows;

Despite Huddersfield not being a strong rugby union area, the stadium has been used for four full cap international rugby union matches. It hosted three qualifying matches for the 1999 Rugby World Cup and one pool match in the pool. Half the matches have seen century scores; by England against Netherlands (110–0) and by the All Blacks versus Italy (101–3).[7]

Artists that have performed at the stadium include Bryan Adams, The Beautiful South, Blue, Bon Jovi, The Eagles, Elton John and R.E.M., among others.