John the Blind (Luxembourgish: Jang de Blannen; German: Johann der Blinde von Luxemburg; Czech: Jan Lucemburský) (10 August 1296 – 26 August 1346) was the Count of Luxembourg from 1309 and King of Bohemia from 1310 and titular King of Poland. He was the eldest son of the Holy Roman Emperor Henry VII and his wife Margaret of Brabant. He is well known for having died while fighting in the Battle of Crécy at age 50, after having been blind for a decade.

Raised in Paris, John was French by education, but deeply involved in the politics of Germany. In 1310 his father arranged the marriage of the 14-year-old to Elisabeth from the Přemyslid dynasty, sister of the deceased King Wenceslaus III of Bohemia. The wedding took place in Speyer, after which the newlyweds made their way to Prague accompanied by a group led by the experienced diplomat and expert on Czech issues, Peter of Aspelt, Archbishop of Mainz. Because Henry had imperial regiments accompany and protect the couple from Nuremberg to Prague the Czech forces were able to gain control of Prague and depose the reigning King Henry of Carinthia on December 3, 1310. The Castle at Prague was uninhabitable so John made residence in one of the houses on the Old Town Square and with the help of his advisors he stabilized affairs in the Czech state. He thereby became one of the seven prince-electors of the Holy Roman Empire and – in succession of Wenceslaus III – claimant to the Polish and Hungarian throne. His attempts to follow his father as King of the Romans failed with the election of Louis IV of Wittelsbach in 1314. He later would support Louis in his rivalry with Frederick the Fair of Habsburg, culminating in the 1322 Battle of Mühldorf and in return he received the Egerland as a reward. 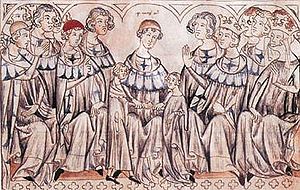 John's wedding to Elisabeth of Bohemia at Speyer

Like his predecessor Henry, he was disliked by much of the Czech nobility. John was considered to be an "alien king" and gave up the administration of Bohemia after a while and embarked on a life of travel. He parted ways with his wife and left the Czech country to be ruled by the barons while spending time in Luxembourg and the French court.[2] His travels took him to Silesia, Poland, Lithuania, Tyrol, Northern Italy and Papal Avignon. A rival of King Władysław I the Elbow-high to the Polish crown, John supported the Teutonic Knights in the Polish–Teutonic War from 1326 to 1332. He also made several Silesian dukes swear an oath of allegiance to him. In 1335 in Congress of Visegrád, Władysław's successor King Casimir III the Great of Poland paid a significant amount of money in exchange for John's giving up his claim to the Polish throne.[3] 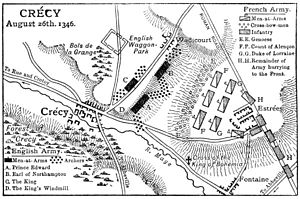 John lost his eyesight at age 39 or 40 from ophthalmia in 1336, while crusading in Lithuania. A treatment by the famous physician Guy de Chauliac had no positive effects. At the outbreak of the Hundred Years' War in 1337 he allied with King Philip VI of France and even was governor of Languedoc from 30 November 1338 to November 1340. At the Battle of Crécy in 1346 John controlled Phillip's advanced guard along with controlling the large contingents of Charles II of Alençon and Louis I, Count of Flanders.[4] John was killed at age 50 while fighting against the English during the battle. The medieval chronicler Jean Froissart left the following account of John's last actions:

...for all that he was nigh blind, when he understood the order of the battle, he said to them about him: 'Where is the lord Charles my son?' His men said: 'Sir, we cannot tell; we think he be fighting.' Then he said: 'Sirs, ye are my men, my companions and friends in this journey: I require you bring me so far forward, that I may strike one stroke with my sword.' They said they would do his commandment, and to the intent that they should not lose him in the press, they tied all their reins of their bridles each to other and set the king before to accomplish his desire, and so they went on their enemies. The lord Charles of Bohemia his son, who wrote himself king of Almaine and bare the arms, he came in good order to the battle; but when he saw that the matter went awry on their party, he departed, I cannot tell you which way. The king his father was so far forward that he strake a stroke with his sword, yea and more than four, and fought valiantly and so did his company; and they adventured themselves so forward, that they were there all slain, and the next day they were found in the place about the king, and all their horses tied each to other.

John was succeeded as King of Bohemia by his eldest son Charles (later Charles IV, Holy Roman Emperor). In Luxembourg, he was succeeded by his son by his second wife, Wenceslaus.

The manner of his death gave rise to the obsolescent idiom, "to fight like King John of Bohemia", meaning "to fight blindly".[citation needed]

Problems with the aristocracy 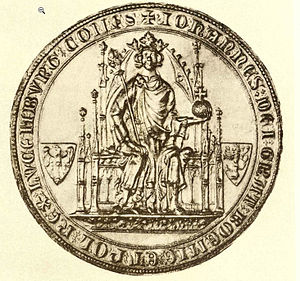 One of John of Luxembourg’s first steps as king was the re-establishment of authority and to secure peace within the country. In 1311 he was able to reach an agreement with the Bohemian and Moravian aristocracy which is referred to as the “inaugural diplomas” with which John restricted the relations of both the ruler and aristocracy. The aristocracy was however allowed to hold the right to elect the king, to decide the matter of extraordinary taxation, the right to their property, and the right to choose freely whether or not to offer military support to the king in foreign wars. Although the aristocracy was encouraged to raise armies when peace within the country was threatened. On the other hand the king’s right to appoint a foreign official to office was abolished. John structured these agreements in order to provide a basis for the consolidation of the ruler’s power within the Bohemian kingdom. The agreements weren’t as successful as John intended. The aristocracy did not intend on surrendering its property and the influence it gained after Wenceslas II died.

The growing tensions within the aristocracy along with the lack of communication due to John’s consistent absence in Bohemia led to a competition of two factions of the Czech aristocracy. One party, led by Jindřich of Lipá (German: Heinrich von Leipa), gained the trust of John. The other party, led by Vilém Zajíc of Valdek (Latin: Wilhelmus Lepus de Waldek;[5] German: Wilhelm Hase von Waldeck), convinced the Queen that the intent of Lord Lipá was to overthrow John. Consequently in 1315 John had Jindřich imprisoned.

By 1318 John had reconciled with the aristocracy and recognized their rights along with taking a further step to establish dualism of the Estates and a division of government between the King and the aristocracy.

Foreign politics, rather than Czech, appealed to John, as he was “unusually gifted” at it. With the help of his father Henry, John was able to pressure the Habsburgs in reaching an agreement over Moravia. He was also able to pressure the House of Wettin, princes of Saxony, to give over the territory lying to the northern border of the Czech state. John also decided to reach out to improve the relations with the Silesian principalities, which were close, both in economic and political standings, to Bohemia and Moravia. 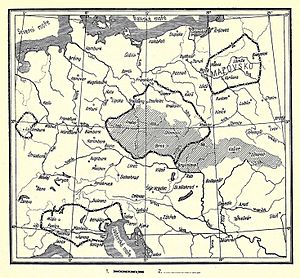 The international spectrum was further broadened for John when his father named him Vicar General, his deputy for the governance of the Empire. This allowed for John to reach further and he was able to contribute to the imperial coronation along with helping with the conclusion of the Italian territorial wars. In 1313 Henry died suddenly bringing an end to this collaboration between him and John. However, through Henry’s death a spot for the imperial crown opened up making John a possible candidate. The other two candidates being Fredrick of the Habsburgs and Louis of Bavaria.

In attempts to not support Fredrick John voted for Louis at the diet of electors. In return for his support Louis, as the new emperor, promised the support in territorial claims of the Czech state in Silesia and Meissen as well as the region of Cheb and the Upper Palatinate. Later in 1319, after the Brandenburg House of Ascania died out, John regained control over the Bautzen region and then the Görlitz region in 1329.[6] 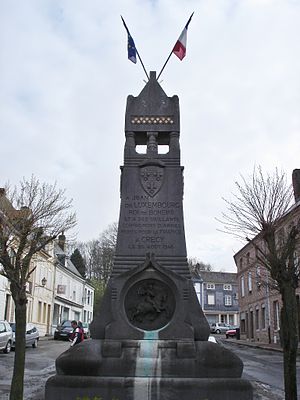 Memorial to Jean I, Count of Luxembourg in Crécy 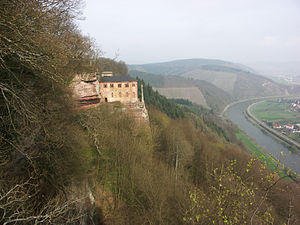 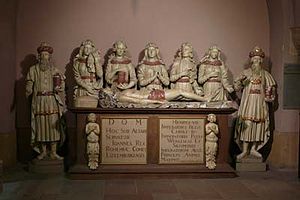 Tomb of John I., Count of Luxembourg

The body of John the Blind was moved to Kloster Altmünster ("Old-Minster Abbey") in Luxembourg. When the abbey was destroyed in 1543 the corpse was moved to Kloster Neumünster ("New-Minster Abbey") in Luxembourg. During the confusion of the French Revolution the mortal remains were salvaged by the Boch industrialist family (founders of Villeroy & Boch, ennobled in 1892) and hidden in an attic room in Mettlach on the Saar River. The legend has it that the monks of the abbey asked Pierre-Joseph Boch for this favor.

His son Jean-François Boch met with Prince Frederick William of Prussia on his voyage through the Rhineland in 1833 offering the remains as a gift. As Prince Frederick considered John the Blind to be one of his ancestors he ordered Karl Friedrich Schinkel to construct a funeral chapel. The chapel was built in 1834 and 1835 near Kastel-Staadt on a rock above the town. In 1838 on the anniversary of his death John the Blind was laid in a black marble sarcophagus in a public ceremony.

In Luxembourg, he is venerated as a national hero and founder of the Schueberfouer, which makes him a "household name" more than 650 years after his death.

According to the Cronica ecclesiae Pragensis Benesii Krabice de Weitmile,[8] when told by his aides that the battle against the English at Crecy was lost and he better should flee to save his own life, John the Blind replied: "Absit, ut rex Boemie fugeret, sed illuc me ducite, ubi maior strepitus certaminis vigeret, Dominus sit nobiscum, nil timeamus, tantum filium meum diligenter custodite. ("Far be it that the King of Bohemia should run away. Instead, take me to the place where the noise of the battle is the loudest. The Lord will be with us. Nothing to fear. Just take good care of my son.")[9][10]

According to popular Czech saying, before he committed himself to combat in battle already lost, he said: "God forbid Bohemian king ever flees from fight". The saying tacitly assumes, the sentence was pronounced in Czech: "Toho bohdá nebude, aby český král z boje utíkal".

Coat of Arms of John the Blind, Count of Luxemburg and King of Bohemia.

He was married twice:

First, to Elisabeth of Bohemia (1292–1330). In this marriage he had the following children:

Second (December 1334), to Beatrice of Bourbon, daughter of Louis I, Duke of Bourbon. This marriage produced one son:

His illegitimate son Nicolaus was Patriarch of Aquileia from 1350 to 1358.