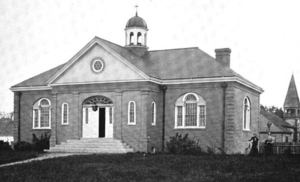 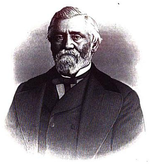 The Jonathan Bourne Public Library (est. 1891) is a public library in Bourne, Massachusetts.[1] Prior to 1891, the town lacked a public library.[2] The Bourne library was named in honor of Jonathan Bourne (1811-1889), who was a New Bedford alderman, major investor in the whaling business,[3] member of executive councils of Massachusetts governors George D. Robinson and Oliver Ames, and namesake of the town of Bourne.[4] Bourne's daughter, Emily Howland Bourne, donated the library's original building in 1897.[5][6]

The 1897 building, located at 30 Keene Street, served as the library until 1984. During those years, space was on a number of occasions an issue, and the building was repeatedly modified to make room for more books and services. In 1984 the library was moved to the former Bourne Grammar School at 19 Sandwich Road. The old building has been repurposed as the Jonathan Bourne Historical Center, housing town archives and the local historic society. It was listed on the National Register of Historic Places in 2013.[7]