From Infogalactic: the planetary knowledge core
Jump to: navigation, search
This article is about the Episcopal seminarian. For the White House Press Secretary, see Jonathan W. Daniels.

Jonathan Myrick Daniels (March 20, 1939 – August 20, 1965) was an Episcopal seminarian and civil rights activist. In 1965 he was murdered by a shotgun-wielding construction worker, Tom Coleman, who was a special county deputy, in Hayneville, Alabama while in the act of saving 17 year old Ruby Sales,[1] a young woman civil rights activist. They both were working in the Civil Rights Movement in Lowndes County. Daniels' death generated further support for the Civil Rights Movement.

In 1991 Daniels was designated as a martyr in the Episcopal church, and is recognized annually.[2][3] He is memorialized in the Civil Rights Movement and other venues.

Born in Keene, New Hampshire, Jonathan Myrick Daniels was the son of Phillip Brock Daniels (July 14, 1904 - December 1959), a Congregationalist physician, and his wife Constance Weaver (August 20, 1905 - January 9, 1984). Daniels considered a career in the ministry as early as high school and joined the Episcopal Church as a young man. He attended local schools before graduating from the Virginia Military Institute.[4] He began to question his religious faith during his sophomore year, possibly because his father died and his sister Emily suffered an extended illness at the same time. He graduated as valedictorian of his class.

In the fall of 1961, Daniels entered Harvard University to study English Literature. In the spring of 1962, during an Easter service at the Church of the Advent in Boston, Daniels felt a renewed conviction that he was being called to serve God. Soon after, he decided to pursue ordination. After a working out of family financial problems, he applied and was accepted to the Episcopal Theological School in Cambridge, Massachusetts, starting his studies in 1963 and expecting to graduate in 1966. 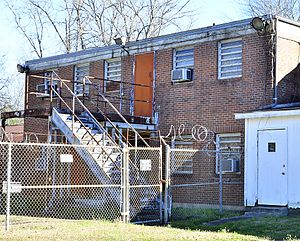 Old Hayneville Jail where Daniels and others were held 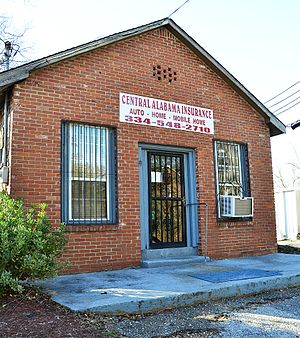 In March 1965, Daniels answered the call of Dr. Martin Luther King, who recruited students and clergy to join the movement in Selma, Alabama, to take part in the march for voting rights from Selma to the state capital of Montgomery. Daniels and several other seminary students left for Alabama on Thursday, intending to stay the weekend. After Daniels and friend Judith Upham missed the bus home, they had second thoughts about their short stay. The two returned to the seminary just long enough to request permission to spend the rest of the semester working in Selma, where they would also study on their own and return at the end of the term to take exams.

In Selma Daniels stayed with the Wests, a local African-American family. During the next months, Daniels worked to integrate the local Episcopal church by taking groups of young African Americans to the church. The church members were not welcoming. In May, Daniels returned to the seminary to take his semester exams and passed.

Daniels returned to Alabama in July to continue his work. He helped assemble a list of federal, state, and local agencies that could provide assistance for those in need. He also tutored children, helped poor locals apply for aid, and worked to register voters. That summer, on August 2, 1965, Congress passed the Voting Rights Act which would provide broad federal oversight and enforcement of the constitutional right. Before that, blacks had been effectively disfranchised across the South since the turn of the century.

On August 14, 1965, Daniels was one of a group of 29 protesters, including members of the Student Nonviolent Coordinating Committee (SNCC), who went to Fort Deposit, Alabama to picket its whites-only stores. All of the protesters were arrested and taken to jail in the nearby town of Hayneville. The police released five juvenile protesters the next day. The rest of the group was held for six days; they refused to accept bail unless everyone was bailed.

Finally, on August 20, the prisoners were released without transport back to Fort Deposit. After release, the group waited near the courthouse jail while one of their members called for transport. Daniels with three others—a white Catholic priest and two black female activists—walked to buy a cold soft drink at nearby Varner's Cash Store, one of the few local places to serve non-whites. But barring the front was Tom L. Coleman, an unpaid special deputy who was holding a shotgun and had a pistol in a holster. Coleman threatened the group and leveled his gun at seventeen-year-old Ruby Sales. Daniels pushed Sales down and caught the full blast of the shotgun. He was instantly killed. Father Richard F. Morrisroe grabbed activist Joyce Bailey and ran with her. Coleman shot Morrisroe, severely wounding him in the lower back, and then stopped firing.[5]

Upon learning of Daniels' murder, Martin Luther King, Jr. stated that "one of the most heroic Christian deeds of which I have heard in my entire ministry was performed by Jonathan Daniels".[6]

A grand jury indicted Coleman for manslaughter. Richmond Flowers, Sr., the Attorney General of Alabama, believed the charge should have been murder and intervened in the prosecution, but was thwarted by the trial judge. He refused to wait until Morrisroe had recovered enough to testify and removed Flowers from the case. Coleman claimed self-defense and was acquitted of manslaughter charges by an all-white jury.[7][8] (Disfranchisement had resulted in excluding blacks from jury duty, as only voters were called.) Flowers described the verdict as representing the "democratic process going down the drain of irrationality, bigotry and improper law enforcement."[9]

Coleman continued working as an engineer for the state highway department. He died at the age of 86 on June 13, 1997, without having faced further prosecution.[7]

The murder of an educated, white seminarian who was defending an unarmed teenage girl shocked members of the Episcopal Church and other whites into facing the reality of racial inequality in the South. Other members worked to continue the civil rights movement and work for social justice.