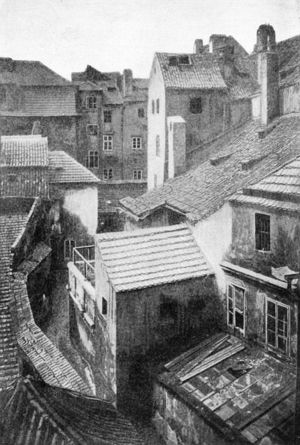 Narrow streets of the ghetto, demolished between 1893 and 1913 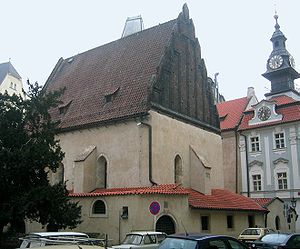 Josefov (also Jewish quarter; German: Josefstadt) is a town quarter and the smallest cadastral area of Prague, Czech Republic, formerly the Jewish ghetto of the town. It is completely surrounded by Old Town. The quarter is often represented by the flag of Prague's Jewish community, a yellow Magen David (Star of David) on a red field.

Jews are believed to have settled in Prague as early as the 10th century. The first pogrom was in 1096 (the first crusade) and eventually they were concentrated within a walled Ghetto. In 1262 Přemysl Otakar II issued a Statuta Judaeorum which granted the community a degree of self-administration. In 1389 one of the worst pogroms saw some 1,500 massacred at Easter Sunday. The ghetto was most prosperous towards the end of the 16th century when the Jewish Mayor, Mordecai Maisel, became the Minister of Finance and a very wealthy man. His money helped develop the ghetto. Around this time the Maharal was supposed to create the Golem.

In 1850 the quarter was renamed "Josefstadt" (Joseph's City) after Joseph II, Holy Roman Emperor who emancipated Jews with the Toleration Edict in 1781. Two years before Jews were allowed to settle outside of the city, so the share of the Jewish population in Josefov decreased, while only orthodox and poor Jews remained living there.

Most of the quarter was demolished between 1893 and 1913 as part of an initiative to model the city on Paris. What was left were only six synagogues, the old cemetery, and the Old Jewish Town Hall (now all part of the Jewish Museum in Prague and described below).

Currently Josefov is overbuilt with buildings from the beginning of the 20th century, so it is difficult to appreciate exactly what the old quarter was like when it was reputed to have over 18,000 inhabitants. Medieval Josefov is depicted in the 1920 film The Golem, composed of crampt, angular, squinted buildings, but this impression is used purely to convey the expressionist nature of the film.