Joseph Alfred McNeil (born March 25, 1942) is a retired Major general in the United States Air Force who is best known as a member of the Greensboro Four; a group of African American college students who, on February 1, 1960, sat down at a segregated Woolworth's lunch counter in downtown Greensboro, North Carolina challenging the store's policy of denying service to non-white customers.

McNeil was born in Wilmington, North Carolina on March 25, 1942.[1][2] He was president of his parish's Catholic Youth Council.[3] McNeil received his early education from Williston Senior High School and soon after graduation, his parents moved the family to New York.[4] McNeil entered North Carolina Agricultural and Technical State University, then the Agricultural & Technical College of North Carolina, having been awarded a Full scholarship.[1] A stark contrast from the more open northern society, McNeil found difficulty living in the segregated south.[5]

On February 1, 1960; McNeil, along with three other A&T freshmen: Ezell Blair, Jr., Franklin McCain and David Richmond (Activist), walked together from the university's library to the downtown Greensboro Woolworth store. Once there, the men purchased items from a desegregated counter, and then sat down at the "whites only" lunch counter where the group was refused service. McNeil and the group stayed until the store closed, and then left to return the next day.[6] as media coverage of the demonstrations grew, more protests were being staged through the state of North Carolina, and other Southern cities. As sales at boycotted stores began to be affected by the protests, store owners began to serve all customers in their establishments. After staging the sit-ins, McNeil became involved with the formation of the Student Executive Committee for Justice. This joint organization between A&T students and the women of nearby Bennett College, focused on the picketing of segregated downtown Greensboro establishments. McNeil would later participate in negotiations between student protesters, Woolworth’s management, and the Human Relations Commission.[7]

In 1963, McNeil would go on to earn a Bachelor of Science degree in engineering physics from North Carolina A&T and was commissioned as a second lieutenant through the university's ROTC program.[1][2]

In July 1963, McNeil was assigned to James Connally Air Force Base near Waco, Texas for Training. From 1964 to 1969, McNeil was assigned to Ellsworth Air Force Base, South Dakota where he served as a KC-135 navigator.[2] McNeil spent considerable time in Southeast Asia flying in operations Arc Lite and Young Tiger.[2] During this period, he was promoted to the ranks of First Lieutenant and Captain.[2] In 1972, McNeil served as a navigator instructor, flight commander, executive officer and Commander of the 702nd Military Airlift Squadron at McGuire Air Force Base, New Jersey.[2] During this time he also served as a liaison officer in for the U.S. Air Force Academy.[2] In 1989, McNeil served as special assistant to the Vice Commander and Commander of the 514th Airlift Wing at McGuire Air Force Base. During this time, McNeil was promoted to the ranks of Major, Lieutenant Colonel, and Colonel.[2]

As a traditional Reservist, McNeil was able to develop a civilian career while continuing to serve in the U.S. Air Force. McNeil established himself in the private and public sectors with time spent in corporate finance, investment banking and public services. McNeil joined the Federal Aviation Administration, where he served as assistant division manager of the administration's Eastern Region Flight Standards Division and the manager of the New York Flight Standards District Office.[8] In 2002, two years removed from his retirement from the military, McNeil retired from the Federal Aviation Administration, which he served for over 15 years. 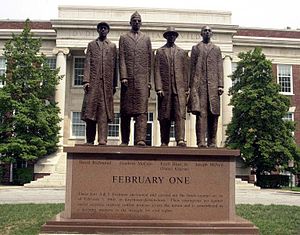 In 2002, North Carolina A&T commissioned a statue to be sculpted honoring McNeil, along with the three other members of the A&T four; Franklin McCain, Ezell Blair, Jr. (later known as Jibreel Khazan), and David Richmond. In addition, the four men each have residence halls named for them on the university campus.[10] In 2010, McNeil was the recipient of the James Smithson Bicentennial Medal from the Smithsonian Institution.[11]

McNeil is married to Ina McNeil (nee Brown). Brown, an accomplished American Indian quilt maker, is of Lakota descent and the great-great granddaughter of Chief Sitting Bull.[9] The two met while he was stationed in South Dakota, while working with an organization that exposed discriminatory housing practices in the state. The two were married in 1967, and together have 5 children.[2]