Joseph Oakland Hirschfelder (May 27, 1911 – March 30, 1990) was an American physicist who participated in the Manhattan Project and in the creation of the nuclear bomb.[1][2] Robert Oppenheimer assembled a team at the Los Alamos Laboratory to work on plutonium gun design Thin Man, that included senior engineer Edwin McMillan and senior physicists Charles Critchfield and Joseph Hirschfelder. Hirschfelder had been working on internal ballistics. Oppenheimer led the design effort himself until June 1943, when Navy Captain William Sterling Parsons arrived took over the Ordnance and Engineering Division and direct management of the "Thin Man" project.[3] Hirschfelder was a member of the National Academy of Sciences,[1][2] a group leader in theoretical physics and ordnance at the Los Alamos Atomic Bomb Laboratory,[1] chief phenomenologist at the nuclear bomb tests at Bikini,[1] the founder of the Theoretical Chemistry Institute and the Homer Adkins professor emeritus of chemistry at the University of Wisconsin.[1] Hirschfelder was also a fellow of the American Academy of Arts and Sciences.[2] He was awarded the National Medal of Science from President Gerald Ford “for his fundamental contributions to atomic and molecular quantum mechanics, the theory of the rates of chemical reactions, and the structure and properties of gases and liquids.”[2]

The National Academies Press called him "one of the leading figures in theoretical chemistry during the period 1935-90"."[2] In 1991 an award was established in his name by the University of Wisconsin's Theoretical Chemistry Institute - the annual Joseph O. Hirschfelder Prize in Theoretical Chemistry.[4] He was an elected member of the International Academy of Quantum Molecular Science[5] 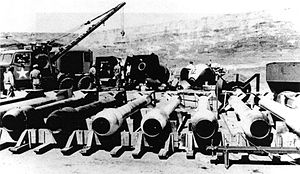 "Thin Man" plutonium gun test casings at Wendover Army Air Field, as part of Project Alberta in the Manhattan Project. "Fat Man" casings can be seen behind them.

Hirschfelder received doctorates in physics and chemistry from Princeton University[1] under the direction of Eugene Wigner and Henry Eyring.