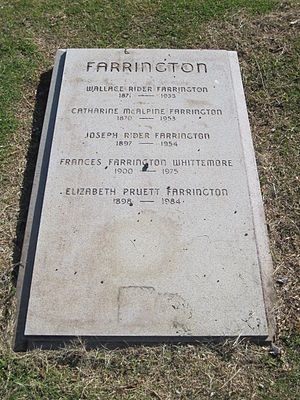 Joseph Rider Farrington (October 15, 1897 – June 19, 1954) was an American newspaper editor and statesman who served in the United States Congress as delegate for the Territory of Hawai'i.[1]

Farrington was born in Washington, D.C. to Wallace Rider Farrington, the future Territorial Governor of Hawai'i. While still an infant, he moved to Honolulu, Hawai'i with his parents where his father began work as an editor for the Honolulu Advertiser and later the Honolulu Star-Bulletin newspapers. Farrington attended Punahou School and, upon graduating, studied at the University of Wisconsin. He dropped out of college in June 1918 to enlist in the United States Army. He was commissioned a second lieutenant of field artillery in September 1918 and discharged the following December. He returned to the University of Wisconsin–Madison and graduated in 1919.

Farrington began a part-time political career as secretary to the Hawai'i Legislative Commission in 1933. The following year he was elected to the Hawaii Territorial Senate, an office he served in through 1942. On January 3, 1943, Farrington was sworn in as a Republican delegate to Congress. He died in office in Washington, D.C. on June 19, 1954. His wife, Elizabeth P. Farrington, was appointed to replace him in Congress. Farrington was buried in the Oahu Cemetery in Nuʻuanu Valley in Honolulu.