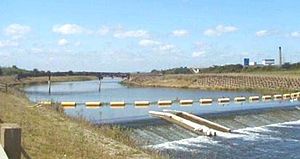 The Jubilee River at Slough Weir

The Jubilee River is a hydraulic channel in southern England. It is 11.6 km (7.2 mi) long[1] and is on average 45 metres (148 feet) wide.[2] It was constructed in the late 1990s and early 2000s to take overflow from the River Thames and so alleviate flooding to areas in and around the towns of Maidenhead, Windsor, and Eton in the counties of Berkshire and Buckinghamshire. It achieves this by taking water from the left (at this point eastern) bank of the Thames upstream of Boulter's Lock near Maidenhead and returning it via the north bank downstream of Eton.[3] Although successful in its stated aims, residents of villages downstream claim it has increased flooding.[4]

The Environment Agency commissioned the design and construction of the river which cost £110 million.[5] When it was formed, the channel was the largest man-made river project undertaken in Britain in modern times, and the second largest in Europe. As well as creating the channel and its various flow control mechanisms, the scheme involved constructing many bridges for road, rail and foot traffic. One of these, Dorney Bridge, took the channel through a 19th-century Brunel railway embankment while it continued to carry main line trains between London and Bristol. The Victorian tall embankment had to be frozen, bored through creating a large tunnel and then a concrete culvert already formed to fit was inserted.[2] 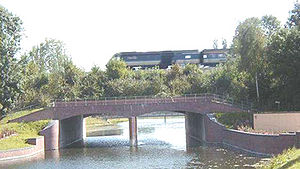 The channel also had to be taken through Black Potts Viaduct, which carries the railway line built to Windsor & Eton Riverside station. Protective structures had to be put in place to preserve its structural integrity.[citation needed]

The channel involved complex civil engineering to deal with utility conduits, roads and railways, as well as ecological and social issues, entailing compulsory purchases, community lectures and consultations and a public enquiry. Conception to fruition took about twenty years.

Defects in parts of the engineering came to light in January 2003, with the first serious test of the flood relief main purpose of the channel. The channel saw flows well short of its designed flow capacity but weir failure and costly bed and bank erosion occurred,[6] leading to a programme of repair and upgrading, costing about £3.5 million. The Environment Agency sued the lead design consultants for recovery of those remedial costs, and an out-of-court settlement of £2.75 million was agreed.[7][8] 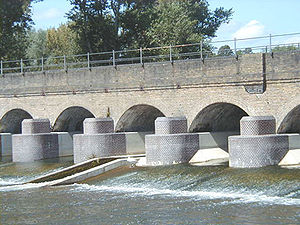 The name used during planning was the "Maidenhead, Windsor and Eton Flood Alleviation Scheme" (MWEFAS). The choice of a name for the river was put to the local population in a poll.[9] The result was a strong preference for 'Jubilee', as it was being completed in Queen Elizabeth's Golden Jubilee year of 2002 and the Queen's preferred home is at Windsor Castle, in one of the three towns being protected by the scheme.

On most analyses the Jubilee River looks and acts like a natural river.[10] Its banks have artificially constructed wildlife habitats intended to replace those lost from the banks of the Thames during urban expansion in the 19th and 20th centuries. During construction 38 hectares (94 acres) of reed beds and 5 hectares (12 acres) of wet woodland were laid down and about 250,000 trees were planted.[2]

The river is well used by walkers, runners, wildlife enthusiasts and cyclists: a footpath combined with National Cycle Route 61 runs along virtually its entire length. A wide variety of bird life can be seen along the river, including green woodpeckers, cormorants, lapwing and red kites.

During flooding upstream and downstream in the early months of 2014 some Ham Island (in Old Windsor) and Wraysbury residents stated the river increased the height of the flooded Thames in much of those villages, which along with much of the river upstream of London saw water levels unprecedented since 1947. Wraysbury had also suffered significant flooding in 2003.[4] The Environment Agency in the 2010s is undertaking a widening and dredging programme of Thames works to assist in downstream flows.[11][12]