Jules A. Hoffmann (born 2 August 1941) is a Luxembourg-born French[1] biologist. During his youth, growing up in Luxembourg, he developed a strong interest in insects under the influence of his father, Jos Hoffmann. This eventually resulted in the younger Hoffmann's dedication to the field of biology using insects as model organisms.[2] He currently holds a faculty position at the University of Strasbourg.[3] He is a research director and member of the board of administrators of the National Center of Scientific Research (CNRS) in Strasbourg, France. He was elected to the positions of Vice-President (2005-2006) and President (2007-2008) of the French Academy of Sciences.[3] Hoffmann and Bruce Beutler were jointly awarded a half share of the 2011 Nobel Prize in Physiology or Medicine for "their discoveries concerning the activation of innate immunity,".[4] [More specifically,the work showing increased Drosomycin expression following activation of Toll pathway in microbial infection.]

Hoffmann and Lemaitre discovered the function of the fruit fly Toll gene in innate immunity. Its mammalian homologs, the Toll-like receptors, were discovered by Beutler. Toll-like receptors identify constituents of other organisms like fungi and bacteria, and trigger an immune response, explaining, for example, how septic shock can be triggered by bacterial remains.[5][6][7]

Hoffmann received undergraduate degrees in biology and chemistry at the University of Strasbourg, France. In 1969, he completed his Ph.D. in biology also at the University of Strasbourg under Pierre Joly in Laboratory of General Biology at the Institute of Zoology.[2] His post-doctoral training was at the Institut für Physiologische Chemie at Philipps-Universität in Marburg an der Lahn, Germany, in 1973–1974.

During his Ph.D. program under Pierre Joly, Hoffmann started his research in studying antimicrobial defenses in grasshoppers, inspired by the previous works done in the laboratory of Pierre Joly showing that no opportunistic infections were apparent in insects after the transplantation of certain organs from one to another.[2] Hoffmann confirmed discovery of phagocytosis done by Eli Metchnikoff, through injection of Bacillus thuringiensis and observation of increase of phagocytes.[2] In addition, he showed strong correlation between hematopoiesis and antimicrobial defenses by assessing the susceptibility of an insect to the microbial infection after X-ray treatment.[2] Hoffmann shifts from using grasshopper model to using dipteran species in the 80s. By using Phormia terranovae, Hoffmann and his colleagues were able to identify 82-residues long antimicrobial polypeptide named Diptericin which was glycine-rich, along with other polypeptides in Drosophila melanogaster such as defensin, cecropin, and attacin.[2] Further molecular genetic analysis revealed that the promoters for the genes encoding these antimicrobial peptides contained DNA sequences similar to the binding elements for NF-κB in mammalian DNA. Dorsal gene, critical in dorso-ventral patterning in the early embryo of Drosophila melanogaster was also identified to be in this NF-κB family. It was initially speculated by Hoffmann and colleagues that activity of Dorsal was directly linked to the expression of the Diptericin gene. However, it turned out that Diptericin was normally induced even in the loss-of-function Dorsal mutants. Further conducted research showed that Diptericin expression was dependent on the expression of imd gene. Identification of another antifungal peptide named Drosomycin and RNA blots demonstrated that two distinct pathways(Toll, Imd) exist, involving Drosomycin and Diptericin respectively. Similarities of structure and function between several members in the Drosophila embryo and members in mammals being noted, study "The Dorsoventral Regulatory Gene Cassette spảtzle/Toll/cactus Controls the Potent Antifungal Response in Drosophila Adults"[8] by Lemaitre and Hoffmann in 1996 illuminated the possible existing innate immunity in Drosophila in response to fungal challenge. Later works identified that Toll transmembrane receptors are present in a wide variety of phyla and are conserved through evolution along with conservation of NF-κB activating cascades.[2]

Bruno Lemaitre, a research associate in the Hoffmann laboratory at the time when the major work on Drosophila innate immunity was conducted (for which Hoffmann was awarded the Nobel), claims he did all the work alone. Lemaitre now supervises his own laboratory at the École Polytechnique Fédérale de Lausanne in Switzerland.[10][11] 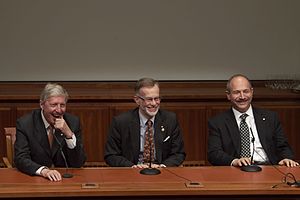 Hoffmann, Göran K. Hansson (chairman of the Nobel Committee for Physiology or Medicine) and Bruce Beutler 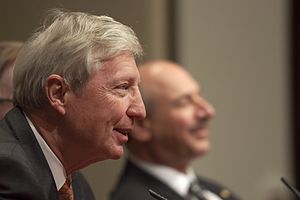