Juniata County is a county located in the U.S. state of Pennsylvania. At the 2010 census, the population was 24,636.[1] Its county seat is Mifflintown.[2] The county was created on March 2, 1831, from part of Mifflin County and named for the Juniata River.

Mountains in Juniata County include Tuscarora Mountain and Shade Mountain. Agricultural land and forested land make up most of the county's area. Major rivers and creeks in the county include the Susquehanna River, the Juniata River, Tuscarora Creek, and West Branch Mahantango Creek. It borders six other counties. The county lies over 16 different rock formations (which are from the Ordovician, Silurian, and Devonian) and 51 different soils.

The first European settlers arrived in Juniata County in the 1750s. The county has historically been part of Mifflin County and before that, part of Cumberland County.

Juniata County was historically a part of Cumberland County and later Mifflin County.[3] Juniata County was formed on March 2, 1831, from parts of Mifflin County. It is named after the Juniata River. The word "juniata" itself is a Seneca word that means either "people of the standing stone" or "blue waters". The first boroughs in the county to be settled were Mifflintown and Thompsontown, which were settled in 1790. Port Royal and Mifflin were settled in 1812 and 1848, respectively. The first of these borough to be incorporated was Mifflintown, on March 6, 1833. The last one to be incorporated was Thompsontown, on February 7, 1868.[4] However, squatters arrived in the county and were removed from it considerably earlier, by 1750 and one of the first warrants for land in the county was issued in 1755.[3][4] Many of the earliest landowners in Delaware Township were speculators as opposed to settlers.[3] There was an Indian raid in the county in 1755 and 1756, although Fort Bingham and Fort Peterson had been constructed.[4] The Beale family was one of the earliest families to inhabit the county. More settlers arrived in the 1750s and 1760s and the first gristmill on the western side of the Juniata River was built in the county in 1767. A public road was built in the county between Tuscarora Creek and a location near Shade Mountain in 1768. John Hamilton constructed a sawmill and gristmill on Cocalamus Creek in Delaware Township in 1776. The first known physician in the county, Dr. Ezra Doty, settled in Mifflintown in 1791.[3]

The first four townships in what would become Juniata County were formed on October 23, 1754. They were Lack Township, Aire Township, Fannett Township, and Tyrone Township. These early townships had no formal boundaries. By 1913, the original townships had been divided into a total of 13 townships.[3]

During Hurricane Agnes in 1972, a total of 6374 acres of Juniata County were flooded. 57 families were displaced during this flooding.[5] 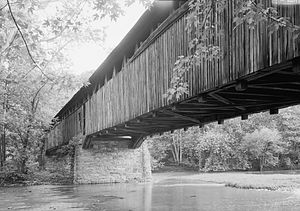 Eight locations in Juniata County are listed on the National Register of Historic Places. They were listed between 1972 and 1986. They include the Academia Pomeroy Covered Bridge, the Tuscarora Academy, and the Book Site in Beale Township; the Dimmsville Covered Bridge in Greenwood Township; the Lehmans-Port Royal Bridge in Milford Township; and the East Oriental and North Oriental covered bridges. Eight additional places are eligible for a listing on the National Register of Historic Places. There are five Pennsylvania Historical and Museum Commission historical markers in Juniata County. They commemorate the Tuscarora Path, the Tuscarora Academy, Patterson's Fort, Fort Bingham, and Juniata County itself.[4]

The Academia Pomeroy Covered Bridge (also known as the Pomeroy Academia Covered Bridge) was built in 1901. It is 18 feet (5.5 m) wide and 278 feet (85 m) long, making it one of the longest remaining covered bridges in Pennsylvania.[6]

There are two locations in Juniata County that the Juniata County Comprehensive Plan describes as "outstanding and unique scenic features". These are Hawstone Overlook and the Concord Narrows. Hawstone Overlook is an overlook in Milford Township on Pennsylvania Route 333, from which the Juniata River between Shade Mountain and Blue Mountain can be seen, as well as the Lewistown Narrows. The Concord Narrows are a narrow water gap where the Juniata River flows past Tuscarora Mountain. Quartizite from the Silurian Period can be found in this water gap.[4]

There are 51 different soil types in Juniata County, of which 18 are considered prime farmland. There area few agricultural soils on the northern and southern edges of the county.[4]

On average, Juniata County receives 38 inches (97 cm) of precipitation per year. An average of 28 inches (71 cm) of snow fall on the county each winter. The county rarely experiences long-term droughts, but does experience short-term droughts often.[4]

The housing density and population density of Juniata County is considerably below average for a Pennsylvania county.[19]

At the 2010 census, the average household size in Juniata County was 2.57 and the average family size was 3.01. 23.0% of the county's households were inhabited by a single individual.[17]

There is one public library in Juniata County: the Juniata County Library in Mifflintown. It has approximately 64,000 materials and an annual circulation of 131,940 materials.[21] It will be celebrating its 50th anniversary in 2016.

There are no hospitals in Juniata County. The county is served by a hospital in Lewistown, which was established in 1905. The county has six emergency medical services units and eight fire companies, all of which are volunteer fire departments. As the county does not have its own police force, it is served by the Pennsylvania State Police.[21]

There are more than 100 cemeteries in Juniata County.[4]

94.32% of the houses in Juniata County have full plumbing facilities. This is below Pennsylvania's average (98.51%), which may be due to the presence of cabins and other houses that are not permanently inhabited. Mifflin has the highest percentage of houses with full plumbing facilities of any township or borough in the county (100%). Lack Township has the lowest percentage of houses with full plumbing facilities (72.31%).[10] There are six public sewer companies in the county, the largest of which, the Twin Boroughs Sanitary Authority, is used at a rate of 450,000 gallons per day. The county also has five public water companies, including the Port Royal Municipal Authority and the Mifflintown Municipal Authority. The Mifflintown Municipal Authority is the most-used water company in the county, serving 465,000 gallons of water per day.[21]

Nine townships and all four boroughs in Juniata County receive electricity from Pennsylvania Power and Light. The remaining townships are given electricity by First Energy and Valley Rural Electric Cooperative, Inc.. Nittany Media Inc. and Dish and Direct TV provide cable services to the county.[21]

There are 254 state-owned bridges in Juniata County, of which 77 are considered structurally deficient by the Pennsylvania Department of Transportation.[22]

For air travel, Juniata County is served by the privately owned Mifflintown Airport and the Stottle Memorial Heliport in Tuscarora Township.[22]

The Greenwood School District has an elementary school, a middle school, and a high school. They have 449, 137, and 278 students, respectively.[21]

Additionally, there are 12 private schools in Juniata County, most of which are religious schools run by groups such as the Amish or other types of Mennonites. Nearly all are based in Mifflintown, McAlisterville, or Thompsontown, although one is based in Port Royal. In May 2014, the largest private school in the county was the Juniata Mennonite School, which had 220 students, and the smallest private school was the Breezy Hollow Amish School, which had 18 students.[21]

There are no colleges in Juniata County, although there are twelve in the county's general vicinity.[21]

There are five areas in Juniata County that are protected by the Central Pennsylvania Conservancy: the Baker Easement, the Brady Bryner Preserve, the Gregory Alan Grening Preserve, the Grening Preserve Addition, the McLaughlin Easement, and the Port Royal Wetlands. The combined area of these lands is 415 acres. There are State Game Lands in the northwestern part of the county and state forests in the county's northern and southern portions.[4]

Four streams in Juniata County are considered high-quality coldwater fisheries. There are also some Class A Wild Trout Waters in the northern and western parts of the county.[4]

The largest remaining intact wetland in Juniata County may be the Cedar Spring Run Wetland, which is in Walker Township. The Juniata County Natural Heritage Inventory considers it to be an "exceptional significance" site. Numerous wetland plants that are rare in the area inhabit this wetland, including Quercus shumardii. The wetland is a red maple-black ash palustrine forest community. Another wetland on the Natural Heritage Inventory's list of exceptional significance sites is the Locust Run Wetlands, which is in Walker Township and Delaware Township. These wetlands consist of two large groups of temporary pools and several permanent ones. The West Branch Mahantango Creek Vernal Pools are also in the county. This system consist of dozens of temporary pools that are inhabited by Leucothoe racemosa. The Slim Valley Wetlands are in Fayette Township and Fermanagh Township. They contain spotted pondweed and serve as a breeding ground for amphibians.[24]

There are four sites on Tuscarora Creek and its tributaries on the "exceptional significance" list in the Juniata County Natural Heritage Inventory. The Doyle Run Floodplain is located on the creek in Beale Township. It contains a silver maple floodplain forest and is home to Ranunculus flabellaris and many species that are rare in Pennsylvania. Barton Hollow, a tributary of Tuscarora Creek in Lack Township, is home to plant species such as Carex careyana and Pinus echinata and animal species such as the Emperor Butterfly and a mussel species known as the Triangle Floater. Tuscarora Creek supports Carex shortiana downstream of Blair Hollow in Lack Township, as well as 350 plant species and 50 animal species. The creek's valley downstream of Pennybaker Island in Lack Township is home to Samolus parviflorus and Quercus shumardii.[24]

A woodland known as the Kurtz Valley Woodland is located in Delaware Township, Juniata County. It is listed as an "exceptional significance" site on the Juniata County Natural Heritage Inventory and contains a red cedar–redbud shrubland community, which is rare in Pennsylvania. The McAlister Limestone Glade is another "exceptional significance" site in the county. It is located in Fayette Township and contains a side-oats grama calcareous grassland, which is described as a "very important" natural feature. The Westfall Prairie is also located in Fayette Township and is home to a number of rare species.[24]

Under Pennsylvania law, there are four types of incorporated municipalities: cities, boroughs, townships, and, in at most two cases, towns.

Boroughs in Juniata County include:[11]

Townships in Juniata County include:[11]

Census-designated places are geographical areas designated by the U.S. Census Bureau for the purposes of compiling demographic data. They are not actual jurisdictions under Pennsylvania. CDPs in Juniata County include:[11]