KDDI provides mobile cellular services using the "au by KDDI" brand. ISP network and solution services are provided under the au one net brand, while "au Hikari" is the name under which long-distance and international voice and data communications services and Fiber to the Home (FTTH) services are marketed. ADSL broadband services carry the brand name "ADSL One", and IP telephony over copper is branded as "Metal Plus". 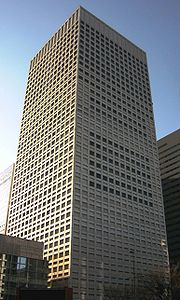 KDDI Building in Shinjuku, which used to be the headquarters of KDD.

au by KDDI has been very successful with its EZ wireless data services, EZweb, EZweb@mail, EZappli, EZchakuuta, ezmovie, and EZnaviwalk (GPS), using the advanced WAP technology. It supports both Java ME and BREW application environments.

On January 26, 2006, the first pointing local search application, Mapion Local Search - Powered by GeoVector, was launched on the KDDI network on their GPS and compass equipped handsets.[4] KDDI announced that it will collaborate with the Taiwanese manufacturer HTC Corp. to sell the mobile phone HTC J in Japan starting May 2012. The HTC J mobile phone will feature the Android 4.0 operating system.[5][6]

KDDI together with Sumitomo Group signed an agreement with Myanmar State owned Myanmar Post and Telecommunication (MPT) in July 2014 to jointly operate a mobile phone service in Myanmar for next 10 years.[8][9]

TU-KA (TU-KA by KDDI), a subsidiary company of KDDI, was a 2G PDC cellular operator in three metropolitan areas (Tokyo, Nagoya, and Osaka), which did not apply a 3G license. TU-KA was best known for having singer Ayumi Hamasaki to appear in their commercials. TU-KA was closed on March 31, 2008.

DDI Pocket, a PHS operator, was previously owned by KDDI but has now been spun off as Willcom.

In August 2014, KDDI announced it was joining forces with five other global companies, including Google to build a super-fast undersea data transmission cable linking the United States West Coast and Japan. The pipeline was expected to be completed by 2016-end.[10]

KDDI and Ericsson began working together in December 2015 in order to research and develop 5G technology.[11]

In 2003, several class action complaints were filed againtst DDI for misrepresenting and/or failing to disclose material facts about the Company's financial results during the Class Period.[12] The parties agreed on a $4.4 million settlement in 2006.[13]