From Infogalactic: the planetary knowledge core
Jump to: navigation, search
For other uses, see KPN (disambiguation).

KPN (in full Koninklijke KPN N.V., also Royal KPN N.V.) is a Dutch landline and mobile telecommunications company. The company is based in The Hague. Current (2013)[2] main share holders are:

Stichting Preferente Aandelen B KPN is a foundation which "was established to promote the interests of KPN, KPN its related companies and all stakeholders, including influences the continuity, independence or identity of KPN in conflict with the interests and threaten to keep much as possible." The foundation exercised a call option to gain roughly 50% of the KPN shares in order to protect KPN against a hostile takeover. This stock has been withdrawn on a special shareholder meeting held on the 10th of January 2014, as per the request of the foundation in November 2013.[3]

The company was formerly called Koninklijke PTT Nederland, and prior to that Staatsbedrijf der Posterijen, Telegrafie en Telefonie or PTT and was the publicly owned fixed-line operator of the Netherlands. Before the spin-off of TPG, the company also controlled the national Dutch postal services. The Dutch government progressively privatized KPN beginning in 1994, reducing its stake to 6.4% in 2005, and finally completed the process in 2006, giving up its golden share veto rights.

In 2001 KPN tried to merge with the Belgian telco Belgacom. It did not succeed because of the objections of the Belgian government. In 2001, Spanish Telefonica expressed an interest in buying KPN.[citation needed]

The Japanese mobile telephone company NTT DoCoMo holds a 2% stake in KPN Mobile NV. From 2002 until 2007 KPN Mobile provided i-mode services on its mobile phone networks. i-mode as introduced by KPN's E-Plus in Germany in March 2002 and by KPN Mobile The Netherlands in April 2002 was the first mobile Internet service in Europe (ahead of Vodafone's V-live).

KPN partly owned KPNQwest, a telecommunications company equally owned by KPN and the American Qwest Communications International. The company was set to bring together the state-of-the-art fibre-optic networks of the two partners and the Internet services expertise and customer base of EUnet International. The company collapsed in a bankruptcy in 2002.

KPN also has operational synergies through joint ventures with TDC and Swisscom.

In 2007 KPN acquired Getronics N.V., a worldwide ICT services company with more than 22,000 employees, and almost doubled its former size. KPN is still divesting parts of Getronics that didn't meet their core interests. Recently they sold a Dutch department of Getronics named Business Application Services (BAS) to CapGemini for about €250,000,000.[citation needed]

In August 2013, América Móvil offered to take over the remaining 70% stake of the Dutch telecommunications company for 7.2 billion Euros ($9.49 billion). América Móvil currently owns close to 30% of KPN. The Dutch Government has issued a warning on this proposed takeover of KPN by Mexican Billionaire Carlos Slim, as part of his ambition to expand his telecom empire.[4] The plans eventually ended when the "Stichting Preferente Aandelen B KPN" exercised a call option to gain ~50% of the total shares, in order to put up a temporary protection wall against the hostile takeover. 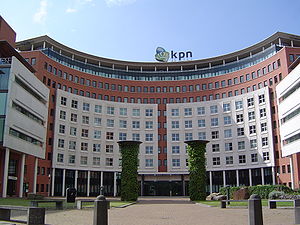 KPN Head Office in The Hague

In the Netherlands, KPN has 6.3 million fixed-line telephone customers. Its mobile division, KPN Mobile, has more than 33 million subscribers in the Netherlands, Germany, Belgium, France, and Spain under different brand names. Through its ownership of several European Internet service providers, KPN also provides Internet access to 2.1 million customers, and it offers business network services and data transport throughout Western Europe.

KPN operates a mobile services network for 2G and 3G technologies. 4G has recently been rolled out and, as of March 2014, covers the Netherlands entirely. (Note: "entirely" equals roughly 95%) KPN is the first Dutch network to have completed its 4G network. KPN announced it will, per the 1st of July 2014, start offering LTE-Advanced in limited locations on the 1800Mhz band, whereas the majority of KPN's 4G network operates in the 8/900MHz bands, which will allow theoretic download speeds up to 200MBit/sec. KPN currently offers 50MBit/sec as the maximum speed on its 4G network. Along with the completion of the 4G network, KPN is upgrading the 2G and 3G networks and capacity, using Huawei Single-RAN technology.

As of 2004, KPN is active in the Dutch, German, Belgian, Spanish and French telecommunication markets.

In the Dutch telephone market, KPN is the owner of the fixed telephone operations (FLO) network and is the market leader in mobile network operator (MNO), with the brands KPN Mobile and Telfort and as a Mobile Virtual Network Operator under the brand names Simyo, Ay Yildiz and Ortel Mobile.

In 2004, KPN also started offering digital terrestrial television in the Netherlands as part of its multi-play services via its subsidiary KPN Digitenne. Since 1 May 2006, KPN offers Interactive Television, an IPTV service based on their DSL service, with the ability to receive Video On Demand and replay your missed TV episodes besides regular TV programming.

KPN Retail is a Dutch subsidiary that owns retail stores under the brands of kpn winkel, Hi Stores and KPN Business Center.

In Belgium, the KPN subsidiary BASE is the third largest supplier of mobile telephony and is also active as a virtual mobile phone operator under the brand names Simyo and Ortel Mobile.

In 2015, BASE was sold to Telenet (Belgium), a Belgian cable broadband service provider.

In 2007 KPN purchased the Belgian fixed telephone and broadband operations of the Tele2-Versatel joint venture. These were sold again in December 2009 to Mobistar (Orange).

In Germany, KPN is, with subsidiary company E-Plus, the third largest player on the mobile telephony market. It is also active as a virtual mobile phone operator under the brand names BASE, Simyo, Vybemobile and Blau Mobilfunk. The company OnePhone Deutschland GmbH is a joint venture of KPN Mobile International B.V. (98 percent subsidiary of KPN) and the OnePhone holding AB (Sweden).

In France, KPN is active as virtual mobile phone operator under the brand name Simyo which operates via Bouygues Télécom.

On December 21, 2009, KPN became 100% owner of the US based iBasis, formerly a publicly traded company. iBasis is a provider of wholesale international IP telephony services.

At the moment KPN is outsourcing all its technology departments to technology partners, such as Ericsson and Huawei, and transforming the company into a sales organization with the focus on selling telecom subscriptions. The goal is to become a telecom service provider instead of a telecom provider.[citation needed]