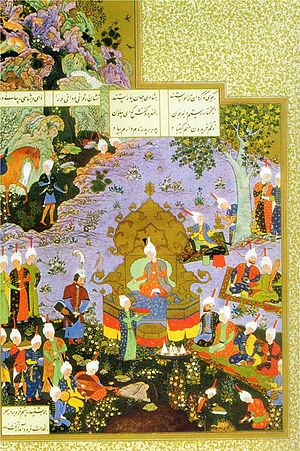 Kobad lived in the Alborz mountains and it was Rostam who brought him to the Estaxr capital.

Kai Kobad (also known as Kay Qobád) is a mythological figure of Iranian folklore and oral tradition. The 'Kai' stock epithet identifies Kobad as a Kayanian, a (semi-)mythological dynasty that in tradition Kai Kobad was also the founder of.

In the tradition preserved in the Shahnameh, Kai Kobad was a descendant of Manuchehr, and lived in the Alborz mountains, and was brought to the Estaxr (the capital) by Rustam. Under Nowzar, who loses the xvarənah for oppressing the Iranians, the Pishdādi dynasty grows weak, and Iran falls to the Aniranian General Afrasiab, who kills Nowzar in battle. Then however, Kobad defeats Afrasiyab in personal combat, and for this feat and because he possesses the xvarənah he is elected king by the Iranians, and the descendents of Nowzar—Zou, Garshasp and Gastham—pay him allegiance.