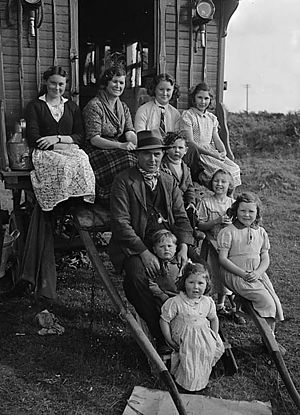 The Kale (also Kalá, Valshanange) are a group of Romani people who reside in Wales. Many claim to be descendants of Abram Wood, who was the first Romani to reside permanently and exclusively in Wales in the early 18th century, though Romanies have appeared in Wales since the 15th century.[1] Generally speaking, the Kale have employed a tribal structure in which a group of several family units would be under the authority of a male chieftain. However some Kale families are matriarchal with a senior woman being chosen by consensus among the other women of the family to take the leadership role.

The Kale spoke Welsh Romani. Originally the variants of Welsh Romani and the Angloromani of the Romanichal constituted a common "British Romani" language.[2] Both Welsh and English Romani share characteristics and are historically closely related to Romani dialects spoken in France, Germany (Sinti), Scandinavia, Spain, Poland, North Russia and the Baltic states. Such dialects are descended from the first wave of Romani immigrants into western, northern and southern Europe in the late Middle Ages.[3]

The Welsh Romani language survived in North Wales until at least 1950; in South Wales, a sort of "pidgin" dialect arose in the late 19th century, mostly consisting of Romani and English but with other loanwords from various languages (Arabic, Iranian, Greek, Romanian, German, French and Welsh) that indicate the long journey of the Kale.

While preserving their travelling lifestyle the Kale grew to claim several aspects of Welsh culture, including conversion to Christianity, taking on Welsh surnames, and participating in regional and national eisteddfodau. Notably, John Robert Lewis, the husband of Abram Wood's granddaughter, would win prizes for harping in 1842, 1848 and 1850.

Another descendant, John Roberts,[4] earned the sobriquet "Telynor Cymru", and taught his whole family various instruments. His illustrious career culminated in a performance before Queen Victoria at the Palé Hall on 24 August 1889 on the occasion of the Royal Visit to Wales. John Roberts played with his nine sons, all of them on the harp.[5]