From Infogalactic: the planetary knowledge core
Jump to: navigation, search
For other uses, see Kame (disambiguation).

A kame is a geomorphological feature, an irregularly shaped hill or mound composed of sand, gravel and till that accumulates in a depression on a retreating glacier, and is then deposited on the land surface with further melting of the glacier. Kames are often associated with kettles, and this is referred to as kame and kettle topography.

Kame terraces are frequently found along the side of a glacial valley and are the deposits of meltwater streams flowing between the ice and the adjacent valley side. These kame terraces tend to look like long flat benches, with a lot of pits on the surface made by kettles. They tend to slope downvalley with gradients similar to the glacier surface along which they formed, and can sometimes be found paired on opposite sides of a valley. 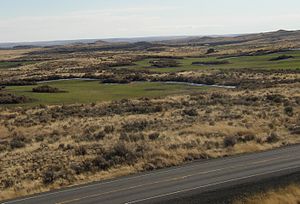 Multiple erratics on the terminal moraine of the Okanagan Lobe

Kames are sometimes compared to drumlins, but their formation is distinctively different. A drumlin is not originally shaped by meltwater, but by the ice itself and has a quite regular shape. It occurs in fine-grained material, such as clay or shale, not in sands and gravels. And drumlins usually have concentric layers of material, as the ice successively plasters new layers in its movement.

Kames are not normally located in proximity to one another, however in Edmonton, Alberta, numerous kames are found nearby, forming the Prosser Archaeological Site. The Fonthill Kame in southern Ontario is in a densely populated area. Examples can also be found in Wisconsin and at the Sims Corner Eskers and Kames National Natural Landscape in Washington. They are also located in Mendon Ponds Park, SE of Rochester, NY. This park is on the National Registry of Natural Landmarks due to geological history & presence of significant kames, eskers & kettles.

In Ontario, there are two provincial parks, both designated as IUCN category the nature reserves, which were created to protect important and undisturbed kame features. They are Minnitaki Kames Provincial Park and Bonheur River Kame Provincial Park.