From Infogalactic: the planetary knowledge core
Jump to: navigation, search
"Kaolin" redirects here. For the community in the United States, see Kaolin, Pennsylvania.

Kaolinite (/ˈkeɪoʊlᵻˌnaɪt/) is a clay mineral, part of the group of industrial minerals, with the chemical composition Al2Si2O5(OH)4. It is a layered silicate mineral, with one tetrahedral sheet of silica (SiO4) linked through oxygen atoms to one octahedral sheet of alumina (AlO6) octahedra.[4] Rocks that are rich in kaolinite are known as kaolin or china clay.[5]

The name is derived from Chinese Kao-Ling (高岭/高嶺, pinyin Gāolǐng, 'High Ridge'), a village near Jingdezhen, Jiangxi province, China.[6] The name entered English in 1727 from the French version of the word: kaolin, following Francois Xavier d'Entrecolles's reports from Jingdezhen.[7] In Africa, kaolin is sometimes known as kalaba (in Gabon[8] and Cameroon[9]), calaba, and calabachop (in Equatorial Guinea).

Kaolinite has a low shrink–swell capacity and a low cation-exchange capacity (1–15 meq/100 g). It is a soft, earthy, usually white mineral (dioctahedral phyllosilicate clay), produced by the chemical weathering of aluminium silicate minerals like feldspar. In many parts of the world, it is colored pink-orange-red by iron oxide, giving it a distinct rust hue. Lighter concentrations yield white, yellow or light orange colors. Alternating layers are sometimes found, as at Providence Canyon State Park in Georgia, US. Commercial grades of kaolin are supplied and transported as dry powder, semi-dry noodle or as liquid slurry.

The chemical formula for kaolinite as used in mineralogy is Al2Si2O5(OH)4,[3] however, in ceramics applications the formula is typically written in terms of oxides, thus the formula for kaolinite is Al2O3·2SiO2·2H2O.[10] Cement chemist notation is even more terse: AS2H2, with the oxides represented as A = Al2O3, S = SiO2, H = H2O.[citation needed] 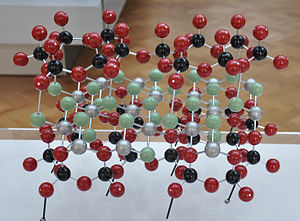 Below 100 °C (212 °F), exposure to dry air will slowly remove liquid water from the kaolin. The end-state for this transformation is referred to as "leather dry". Between 100 °C and about 550 °C (1,022 °F), any remaining liquid water is expelled from kaolinite. The end state for this transformation is referred to as "bone dry". Throughout this temperature range, the expulsion of water is reversible: if the kaolin is exposed to liquid water, it will be reabsorbed and disintegrate into its fine particulate form. Subsequent transformations are not reversible, and represent permanent chemical changes.

Endothermic dehydration of kaolinite begins at 550–600 °C producing disordered metakaolin, but continuous hydroxyl loss is observed up to 900 °C (1,650 °F).[11] Although historically there was much disagreement concerning the nature of the metakaolin phase, extensive research has led to a general consensus that metakaolin is not a simple mixture of amorphous silica (SiO2) and alumina (Al2O3), but rather a complex amorphous structure that retains some longer-range order (but not strictly crystalline) due to stacking of its hexagonal layers.[11]

Further heating to 925–950 °C converts metakaolin to an aluminium-silicon spinel which is sometimes also referred to as a gamma-alumina type structure:

Upon calcination above 1050 °C, the spinel phase nucleates and transforms to platelet mullite and highly crystalline cristobalite:

Finally, at 1400 °C the "needle" form of mullite appears, offering substantial increases in structural strength and heat resistance. This is a structural but not chemical transformation. See stoneware for more information on this form.

Kaolinite is one of the most common minerals; it is mined, as kaolin, in Pakistan, Vietnam, Brazil, Bulgaria, France, United Kingdom, Iran, Germany, India, Australia, Korea, the People's Republic of China, the Czech Republic, Spain and the United States.[1]

Kaolinite clay occurs in abundance in soils that have formed from the chemical weathering of rocks in hot, moist climates—for example in tropical rainforest areas. Comparing soils along a gradient towards progressively cooler or drier climates, the proportion of kaolinite decreases, while the proportion of other clay minerals such as illite (in cooler climates) or smectite (in drier climates) increases. Such climatically-related differences in clay mineral content are often used to infer changes in climates in the geological past, where ancient soils have been buried and preserved.[citation needed]

In the Institut National pour l'Etude Agronomique au Congo Belge (INEAC) classification system, soils in which the clay fraction is predominantly kaolinite are called kaolisol (from kaolin and soil).[12]

In the US the main kaolin deposits are found in central Georgia, on a stretch of the Atlantic Seaboard fall line between Augusta and Macon. The deposits were formed between the late Cretaceous and early Paleogene, about 100 million to 45 million years ago, in sediments derived from weathered igneous and metakaolin rocks.[13] Kaolin production in the US during 2011 was 5.5 million tonnes.[14]

During the Paleocene–Eocene Thermal Maximum sediments were enriched with kaolinite from a detrital source due to denudation.[15]

Difficulties are encountered when trying to explain kaolinite formation under atmospheric conditions by extrapolation of thermodynamic data from the more successful high-temperature syntheses (as for example Meijer and Van der Plas, 1980 [16] have pointed out). La Iglesia and Van Oosterwijk-Gastuche (1978) [17] thought that the conditions under which kaolinite will nucleate can be deduced from stability diagrams based as these are on dissolution data. Based on the lack of convincing results in their own experiments, La Iglesia and Van Oosterwijk-Gastuche (1978) had to conclude, however, that there were other, still unknown, factors involved in the low-temperature nucleation of kaolinite. Because of the observed very slow crystallization rates of kaolinite from solution at room temperature Fripiat and Herbillon (1971) postulated the existence of high activation energies in the low-temperature nucleation of kaolinite.

At high temperatures, equilibrium thermodynamic models appear to be satisfactory for the description of kaolinite dissolution and nucleation, because the thermal energy suffices to overcome the energy barriers involved in the nucleation process. The importance of syntheses at ambient temperature and atmospheric pressure towards the understanding of the mechanism involved in the nucleation of clay minerals lies in overcoming these energy barriers. As indicated by Caillère and Hénin (1962) [18] the processes involved will have to be studied in well-defined experiments, because it is virtually impossible to isolate the factors involved by mere deduction from complex natural physico-chemical systems such as the soil environment. Fripiat and Herbillon (1971),[19] in a review on the formation of kaolinite, raised the fundamental question how a disordered material (i.e., the amorphous fraction of tropical soils) could ever be transformed into a corresponding ordered structure. This transformation seems to take place in soils without major changes in the environment, in a relatively short period of time and at ambient temperature (and pressure).

Low-temperature synthesis of clay minerals (with kaolinite as an example) has several aspects. In the first place the silicic acid to be supplied to the growing crystal must be in a monomeric form, i.e., silica should be present in very dilute solution (Caillère et al., 1957;[20] Caillère and Hénin, 1962; Wey and Siffert, 1962;[21] Millot, 1970 [22]). In order to prevent the formation of amorphous silica gels precipitating from supersaturated solutions without reacting with the aluminium or magnesium cations to form crystalline silicates, the silicic acid must be present in concentrations below the maximum solubility of amorphous silica. The principle behind this prerequisite can be found in structural chemistry: “Since the polysilicate ions are not of uniform size, they cannot arrange themselves along with the metal ions into a regular crystal lattice” (Iler, 1955, p. 182 [23]).

The second aspect of the low-temperature synthesis of kaolinite is that the aluminium cations must be hexacoordinated with respect to oxygen (Caillère and Hénin, 1947;[24] Caillère et al., 1953;[25] Hénin and Robichet, 1955[26]). Gastuche et al. (1962),[27] as well as Caillère and Hénin (1962) have concluded, that only in those instances when the aluminium hydroxide is in the form of gibbsite, kaolinite can ever be formed. If not, the precipitate formed will be a “mixed alumino-silicic gel” (as Millot, 1970, p. 343 put it). If this would be the only requirement, large amounts of kaolinite could be harvested simply by adding gibbsite powder to a silica solution. Undoubtedly a marked degree of sorption of the silica in solution by the gibbsite surfaces will take place, but, as stated before, mere adsorption does not create the layer lattice typical of kaolinite crystals.

The third aspect is that these two initial components must be incorporated into one and the same mixed crystal with a layer structure. From the following equation (as given by Gastuche and DeKimpe, 1962) [28] for kaolinite formation

it can be seen, that five molecules of water must be removed from the reaction for every molecule of kaolinite formed. Field evidence illustrating the importance of the removal of water from the kaolinite reaction has been supplied by Gastuche and DeKimpe (1962). While studying soil formation on a basaltic rock in Kivu (Zaïre), Gastuche and DeKimpe noted how the occurrence of kaolinite depended on the "degrée de drainage" of the area involved. A clear distinction was found between areas with good drainage (i.e., areas with a marked difference between wet and dry seasons) and those areas with poor drainage (i.e., perennially swampy areas). Only in the areas with distinct seasonal alternations between wet and dry conditions kaolinite was found. The possible significance of alternating wet and dry conditions on the transition of allophane into kaolinite has been stressed by Tamura and Jackson (1953).[29] The role of alternations between wetting and drying on the formation of kaolinite has also been noted by Moore (1964).[30]

Laboratory syntheses of kaolinite at room temperature and atmospheric pressure have been described by DeKimpe et al. (1961).[43] From those tests the role of periodicity becomes convincingly clear. For DeKimpe et al. (1961) had used daily additions of alumina (as AlCl3.6 H2O) and silica (in the form of ethyl silicate) during at least two months. In addition adjustments of the pH took place every day by way of adding either hydrochloric acid or sodium hydroxide. Such daily additions of Si and Al to the solution in combination with the daily titrations with hydrochloric acid or sodium hydroxide during at least 60 days will have introduced the necessary element of periodicity. Only now the actual role of what has been described as the “aging” (Alterung) of amorphous alumino-silicates (as for example Harder, 1978 [44] had noted) can be fully understood. For time as such is not bringing about any change in a closed system at equilibrium, but a series of alternations, of periodically changing conditions (by definition taking place in an open system), will bring about the low-temperature formation of more and more of the stable phase kaolinite instead of (ill-defined) amorphous alumino-silicates.

The main use of the mineral kaolinite is the production of paper; its use ensures the gloss on some grades of coated paper.

In April 2008 the US Naval Medical Research Institute announced the successful use of a kaolinite-derived aluminosilicate nanoparticle infusion in traditional gauze, known commercially as QuikClot Combat Gauze.[45]

Kaolin is used (or was used in the past):

Kaolin is eaten for health or to suppress hunger,[9] a practice known as geophagy. Consumption is greater among women, especially during pregnancy.[51] This practice has also been observed within a small population of African-American women in the Southern United States, especially Georgia.[52][53] There, the kaolin is called white dirt, chalk or white clay.[52]

People can be exposed to kaolin in the workplace by breathing in the powder, skin contact, and eye contact.