Other notable contributions included his work on regular expressions and early computer text editors QED and ed, the definition of the UTF-8 encoding, his work on computer chess that included creation of endgame tablebases and the chess machine Belle.

Thompson was born in New Orleans. When asked how he learned to program, Thompson stated, "I was always fascinated with logic and even in grade school I'd work on arithmetic problems in binary, stuff like that. Just because I was fascinated."[3] 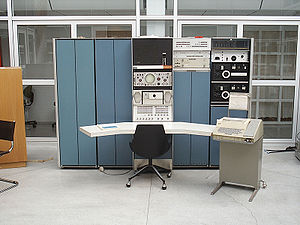 DEC PDP-7, as used for initial work on Unix

Thompson received a Bachelor of Science in 1965 and a Master's degree in 1966, both in Electrical Engineering and Computer Science, from the University of California, Berkeley, where his master's thesis advisor was Elwyn Berlekamp.[4]

In the 1960s at Bell Labs, Thompson and Dennis Ritchie worked on the Multics operating system. While writing Multics, Thompson created the Bon programming language. The two left the Multics project when Bell Labs withdrew from it, but they used the experience from the project.

In 1969, Thompson and Ritchie became the principal creators of the Unix operating system. Working on a PDP-7, a team of Bell Labs researchers led by Thompson and Ritchie, and including Rudd Canaday, developed a hierarchical file system, the concepts of computer processes and device files, a command-line interpreter, and some small utility programs.[5] After initial work on Unix, Thompson decided that Unix needed a system programming language and created B, a precursor to Ritchie's C.[6] 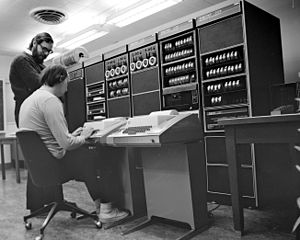 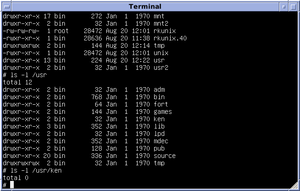 Throughout the 1970s, Thompson and Ritchie collaborated on the Unix operating system; they were so influential on Research Unix that Doug McIlroy later wrote, "The names of Ritchie and Thompson may safely be assumed to be attached to almost everything not otherwise attributed."[8] In a 2011 interview, Thompson stated that the first versions of Unix were written by him, and that Ritchie began to advocate for the system and helped to develop it:[9]

I did the first of two or three versions of UNIX all alone. And Dennis became an evangelist. Then there was a rewrite in a higher-level language that would come to be called C. He worked mostly on the language and on the I/O system, and I worked on all the rest of the operating system. That was for the PDP-11, which was serendipitous, because that was the computer that took over the academic community.

Feedback from Thompson's Unix development was also instrumental in the development of the C programming language. Thompson would later say that the C language "grew up with one of the rewritings of the system and, as such, it became perfect for writing systems."[9]

In 1975, Thompson took a sabbatical from Bell Labs and went to his alma mater, UC Berkeley. There, he helped to install Version 6 Unix on a PDP-11/70. Unix at Berkeley would later become maintained as its own system, known as the Berkeley Software Distribution (BSD).

Along with Joseph Condon, Thompson created the hardware and software for Belle, a world champion chess computer. He also wrote programs for generating the complete enumeration of chess endings, known as endgame tablebases, for all 4, 5, and 6-piece endings, allowing chess-playing computer programs to make "perfect" moves once a position stored in them is reached. Later, with the help of chess endgame expert John Roycroft, Thompson distributed his first results on CD-ROM. 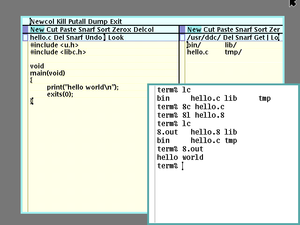 Plan 9 from Bell Labs, running the acme text editor, and the rc shell

Throughout the 1980s, Thompson and Ritchie continued revising Research Unix, which adopted a BSD codebase for the 8th, 9th, and 10th editions. In the mid-1980s, work began at Bell Labs on a new operating system as a replacement for Unix. Thompson was instrumental in the design and implementation of the Plan 9 from Bell Labs, a new operating system utilizing principles of Unix, but applying them more broadly to all major system facilities. Some programs that were part of later versions of Research Unix, such as mk and rc, were also incorporated into Plan 9.

Thompson tested early versions of the C++ programming language for Bjarne Stroustrup by writing programs in it, but later refused to work in C++ due to frequent incompatibilities between versions. In a 2009 interview, Thompson expressed a negative view of C++, stating, "It does a lot of things half well and it's just a garbage heap of ideas that are mutually exclusive."[10]

In 1992, Thompson developed the UTF-8 encoding scheme together with Rob Pike.[11] The UTF-8 encoding has become the dominant character encoding for the World Wide Web, accounting for more than half of all web pages.[12]

In late 2000, Thompson retired from Bell Labs. He worked at Entrisphere, Inc as a fellow until 2006 and now works at Google as a Distinguished Engineer. Recent work has included the co-design of the Go programming language. Referring to himself along with the other original authors of Go, he states:[9]

When the three of us [Thompson, Rob Pike, and Robert Griesemer] got started, it was pure research. The three of us got together and decided that we hated C++. [laughter] ... [Returning to Go,] we started off with the idea that all three of us had to be talked into every feature in the language, so there was no extraneous garbage put into the language for any reason.

According to a 2009 interview, Thompson now uses a Linux-based operating system.[13]

In 1980, Thompson was elected to the National Academy of Engineering for "designing UNIX, an operating system whose efficiency, breadth, power, and style have guided a generation's exploitation of minicomputers."[14]

In 1983, Thompson and Ritchie jointly received the Turing Award "for their development of generic operating systems theory and specifically for the implementation of the UNIX operating system." His acceptance speech, "Reflections on Trusting Trust"[15][16] presented the backdoor attack now known as the Thompson hack or trusting trust attack, and is widely considered a seminal computer security work in its own right.

In 1990, both Thompson and Dennis Ritchie received the IEEE Richard W. Hamming Medal from the Institute of Electrical and Electronics Engineers (IEEE), "for the origination of the UNIX operating system and the C programming language".[17]

Fellow of the Computer History Museum

In 1997, both Thompson and Ritchie were inducted as Fellows of the Computer History Museum for "the co-creation of the UNIX operating system, and for development of the C programming language."[18]

On April 27, 1999, Thompson and Ritchie jointly received the 1998 National Medal of Technology from President Bill Clinton for co-inventing the UNIX operating system and the C programming language which together have led to enormous advances in computer hardware, software, and networking systems and stimulated growth of an entire industry, thereby enhancing American leadership in the Information Age.[19][20]

In 1999, the Institute of Electrical and Electronics Engineers chose Thompson to receive the first Tsutomu Kanai Award "for his role in creating the UNIX operating system, which for decades has been a key platform for distributed systems work."[21]

In 2011 Ken Thompson, along with Dennis Ritchie, was awarded the Japan Prize for Information and Communications for the pioneering work in the development of the Unix operating system.[22]

This audio file was created from a revision of the "Ken Thompson" article dated 2006-06-17, and does not reflect subsequent edits to the article. (Audio help)
More spoken articles
Retrieved from "https://infogalactic.com/w/index.php?title=Ken_Thompson&oldid=721443869"
Categories:
Hidden categories: