From Infogalactic: the planetary knowledge core
Jump to: navigation, search
This article contains a patronymic name. This person is addressed by his given name, Kenenisa, and not as Bekele.

Kenenisa Bekele (Amharic: ቀነኒሳ በቀለ; born 13 June 1982) is an Ethiopian long-distance runner, who holds the world record and Olympic record in both the 5,000 metres and 10,000 metres events. He won a double at the 2008 Summer Olympics in these events; he also won the 2004 Olympic title over 10,000 m. He is married to Danawit Gebregziabher (m. 2007) and has one brother Tariku Bekele.

Kenenisa is considered one of the greatest distance runners of all time, owning several world records and an array of medals. On April 6, 2014, he produced the sixth fastest marathon debut ever on a record eligible course with his victory at the Paris Marathon, in a course record time of 2:05:04. He is the older brother of Tariku Bekele, also an accomplished world-class distance runner.

Kenenisa was born in 1982 at Bekoji, Ethiopia, the same town as the Dibaba sisters (Ejegayehu, Tirunesh and Genzebe) and their cousin Derartu Tulu.

On 4 January 2005, Kenenisa's fiancee, 18-year-old Alem Techale, died of an apparent heart attack while on a training run with him. Although it was initially stated that no autopsy was performed, Alem and Kenenisa's manager, Jos Hermens, later said that an autopsy had revealed nothing conclusive about the young woman's death. She was the 2003 World Youth Champion in the 1500 metres and in excellent physical condition. 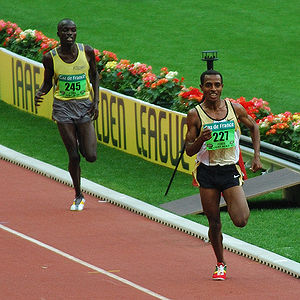 Bekele competing in the 2006 Golden League

Over the next several weeks following Alem's death, Kenenisa grieved. He resumed racing on 29 January, and lost indoors over 3000 m to Ireland's Alistair Cragg after sprinting towards the line with one and a half laps to go, while thinking that there was only half a lap left. Such confusion was presumed to have been caused by his grief. A few weeks later he lost to fellow Ethiopian Markos Geneti over two miles.

In March, Kenenisa faced his toughest challenge yet. Despite his grief and recent losses on the track, he lined up to defend his long and short course titles at the 2005 IAAF World Cross Country Championships. In dramatic fashion, Kenenisa bested the field in the short course despite a fast pace set by Qatari Saif Saaeed Shaheen. He followed that win with a long course victory the next day over Eritrean Zersenay Tadese and Kenyan rival Eliud Kipchoge. 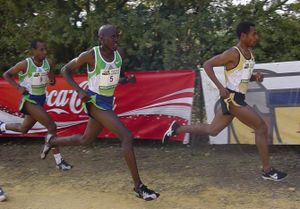 Bekele leading the way at the 2007 Cross de Itálica.

On 17 February 2007, he broke the indoor world record over 2000 m in Birmingham, with a time of 4:49.99. His spectacular final 300 m aided this time which would be considered excellent even outdoors.

On 24 March 2007, however, his remarkable racing streak of 27 consecutive victories in cross country races (dating back to his last previous loss in December 2001) came to an end when after leading the race in the penultimate lap of the 2007 IAAF World Cross Country Championships in Mombasa he succumbed to the very hot, humid conditions (which caused more than 1/6 of all competitors to drop out) and was passed by eventual winner Zersenay Tadese on the last lap before Kenenisa dropped out. This was greeted with cheers by the Kenyan crowds, an occurrence which has been frowned upon by the wider athletics community.

He recovered from that rare failure to take the 10,000 metres title at the 2007 IAAF World Championships in Osaka, once again besting his compatriot Sileshi Sihine. During that race, he looked like he was going to be dropped several times over the last 800 metres, but recovered to overtake Sileshi with 150 metres to go and take his third straight world title. 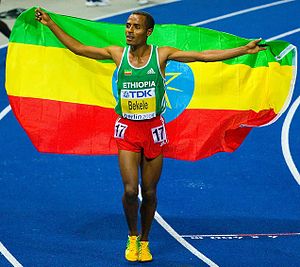 Bekele celebrating his gold medal victory at the 2009 World Championships.

Kenenisa won two gold medals at the 2009 World Championships in Athletics, held in Berlin. His double victories in 5000 m (13:17.09) and 10,000 m (26:46.31 – a World Championships Record) were unprecedented and by doing this became the first man to take both the long distance track gold medals at the same World Championships.[11] His talent combination of endurance and speed has made it nearly impossible to defeat Kenenisa when he is at full strength. During the 10,000m race in which Kenenisa was running behind Eritrea's Zersenay Tadesse, the broadcaster declared "it is over, in fact it was over from the start" as the final lap began and Bekele turned an ostensibly close race into a blowout. The IAAF announcer concluded, "this man is probably the greatest distance runner we will ever see."[12] In spite of his unrivalled success in athletics, he did not experience the mainstream appeal that others such as Haile Gebrselassie did. His quiet demeanour and aversion to interviews did not make him a highly marketable athlete in the Western world. Fellow world record holder Usain Bolt stated that Bekele's achievements had not received the recognition that they deserved.[13] 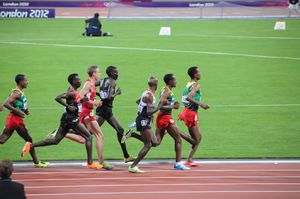 Bekele pursuing the lead pack in the 10,000 meters Men's final event at the 2012 Summer Olympics.

Bekele made a disappointing start to the new year, finishing fourth in the Edinburgh Cross Country in a race he was favored to win – a trio of Kenyan athletes ran him out of the contest over the final lap. Bekele spent the entirety of the indoor and outdoor seasons out, with a ruptured calf muscle.

Bekele finally returned to training from a knee injury in March 2011.[14] Having not raced on the track since 2009, Bekele returned for the World Championships.[15] But Bekele dropped out of the 10,000m with 10 laps remaining.[16] He decided not to run the 5,000m and [17] returned to the Diamond League at the Ivo Van Damme Memorial in Brussels where he set the fastest time in the world for the 10,000 metres in 2011.[18][19] His 2012 did not start well, as he was a lowly eleventh place at the Edinburgh Cross Country.[20] In April, he appeared to have returned to form by winning the Great Ireland Run in a new personal best time for a 10 km road race of 27:49, improving the course record by 46 seconds.[21] In the 2012 London Olympic Games' 10,000 m race he ran within the leading group for the whole race, but could not keep up with the leaders' sprint in the last 150 meters and eventually finished fourth, with a time of 27:32.44, just 1.01 second outside the bronze medalist, his brother Tariku.[22]

In his first race of 2013 he won the Great Ireland Run for a second time.[23] Bekele then won the Great North Run half marathon in a time of 60:09, beating Mo Farah by just one second after making a move that Farah couldn't match with just less than 12 miles gone. 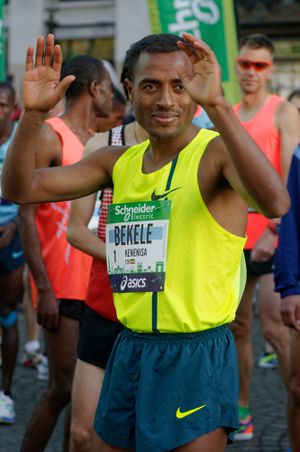 Bekele at the 2014 Paris Marathon.

Kenenisa Bekele started his marathon career in the Paris Marathon on April 6, 2014. His marathon debut was very successful as he battered both the Paris course record and the debut marathon times of past legends Haile Gebrselassie, Paul Tergat and Samuel Wanjiru by running 2:05:04 to win the 2014 Paris Marathon.[24]

Bekele was planned to compete in the 2015 London Marathon but had to withdraw due to a persistent injury to his right Achilles tendon.[27] 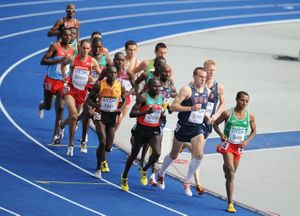 Bekele leading the 5000 m at the 2009 World Championships