From Infogalactic: the planetary knowledge core
Jump to: navigation, search
For the expressway in New York City, see JFK Expressway.

The John F. Kennedy Expressway is a 17.8-mile-long (28.65 km) freeway that travels northwest from the neighborhood of West Loop to O'Hare International Airport. The highway is named for the 35th U.S. President, John F. Kennedy, and conforms to the Chicago-area convention of using the term Expressway for an Interstate Highway without tolls. The Interstate 90 (I-90) portion of the Kennedy is a part of the much longer I-90 (which runs 3,111.52 miles (5,007.51 km) from Boston, Massachusetts to Seattle, Washington). The Kennedy's official endpoints are the Circle Interchange with Interstate 290 (Eisenhower Expressway/Congress Parkway) and the Dan Ryan Expressway (also I-90/94) at the east end, and the O'Hare Airport terminals at the west end. The Interstate 190 portion of the Kennedy is 3.07 miles (4.94 km) long and is meant to serve airport traffic. Interstate 90 picks up the Kennedy destination and runs a further 6.29 miles (10.12 km), before joining with I-94 for the final 8.44 miles (13.58 km).[1]

With up to 327,000 vehicles traveling on some portions of the Kennedy daily, the Kennedy and its South Side extension, the Dan Ryan, are the busiest roads in Illinois.[1] 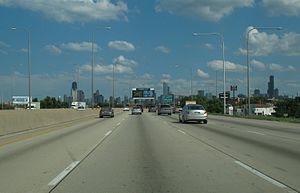 An eastbound view of the Kennedy Expressway heading toward downtown Chicago

The Kennedy was originally constructed along the route of Avondale Avenue, an existing diagonal street, and the northwest railroad corridor, in the late 1950s and completed on November 5, 1960. Originally named the Northwest Expressway for its general direction of travel, the Chicago City Council voted unanimously on November 29, 1963—one week after the assassination of President Kennedy—to rename the highway the John F. Kennedy Expressway.[2] Until 1978, the Kennedy Expressway was marked as I-94 and Illinois Route 194 (IL 194), I-90 and I-190 replaced IL 194 and thus the Eisenhower Expressway was renamed from I-90 to I-290.

The express portion of the freeway was last reconstructed from 1992 through 1994,[3] when the existing express lanes, which previously were reversed by hand, were modernized. In addition, all aspects of the express lanes system were computerized, so that the process could be controlled at both ends from a central location. At least once a day, however, IDOT crews still examine the express lanes for debris while the lanes are closed. 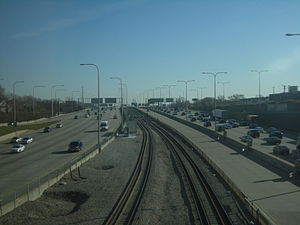 Southeastward view of the Kennedy Expressway from the Montrose Blue Line Station, with the reversible express lanes to the right of the tracks

In 2005, the Washington Street bridge over the expressway was reconstructed, and the entrance ramps to both directions of the Kennedy were partially removed. The same was done in 2006 for the Monroe Street bridge. This left a disconnected portion of each ramp remaining on the expressway, to be removed and the existing "suicide ramps'" lengths extended when funding became available. The American Recovery and Reinvestment Act of 2009 provided the necessary funding for the construction between Hubbard Street and the Circle Interchange, commencing in summer 2009. The westbound (facing north) ramps at Adams Street and Madison Street, along with the eastbound (facing south) ramps at Randolph Street and Madison Street, were lengthened by removing what remained of abandoned ramps and lengthening the entrance ramps significantly.[4] The only remaining short, limited-sight, left-side suicide ramp entrance is from Lake Street to the eastbound expressway (heading south). As part of the project, eastbound (heading south) traffic patterns were adjusted. The two right-most lanes were made "exit only" for Chicago Loop, Congress Parkway, and Eisenhower Expressway exits, the Adams Street and Jackson Boulevard exits were combined, certain center median walls reconstructed, lanes restriped to remove the merging of the leftmost lanes, and appropriate signage changes. For example, the changes increased the taper for the Randolph Street entrance headed eastbound from 160 to 583 feet (49 to 178 m),[5] an increase of over 3.6 time. In the westbound direction (headed north), the exit ramp to Monroe Street was permanently removed.

In 2015, the American Highway Users Alliance named the 12 miles (19 km) of the Kennedy between the Circle Interchange and Edens junction the worst traffic bottleneck in the country.[6]

The Blue Line operates in the median of the Kennedy Expressway for about 10 miles (16 km) from just south of Addison Street to just east of Mannheim Road. In 1984, the city of Chicago decided that the best option to serve the needs of the people regarding public transportation, was a rapid transit line constructed in the median to O'Hare instead of a fourth lane in both directions. This had been done previously in the early 1950s within the medians of the Eisenhower Expressway, and for the Dan Ryan Expressway in 1969. The decision proved to be wise, as the rail line is heavily traveled by commuters and travelers during the rush hour. 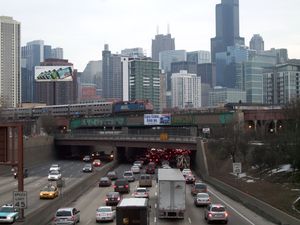 Sign over the Kennedy Expressway, at the north entrance to Hubbard's Cave, encouraging commuters to use Metra trains, such as one seen here passing over the highway, to avoid the common congestion

The second distinct features of the Kennedy Expressway are its reversible express lanes where I-94 merges into I-90. The reversible lanes lie in the median of the highway from the Kennedy Expressway/Edens Expressway junction until just north of the Loop (at Ohio Street), a distance of about eight miles (13 km). These reversible lanes allow two lanes of traffic to flow towards or away from the city, depending on the time of the day. The lanes are controlled by computers and verified by humans at a separate control center. Steel mesh barriers and breakaway gates prevent traffic from entering oncoming lanes. On January 25, 2014, a drunk driver broke through the safety gates and drove in the express lanes in the wrong direction, but was stopped by a snow plow; no injuries were reported.[7] This was the first wrong-way accident involving the express lanes.[citation needed]

A third distinct feature is Hubbard's Cave, also called the Hubbard Street Tunnel, a continuous set of bridges for a number of streets and railroads over the highway that forms a tunnel. It is named for Hubbard Street, one of the streets it passes underneath. Hubbard's Cave is a landmark frequently heard in traffic reports on radio and TV. 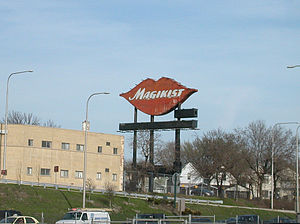 Magikist Lips sign formerly located on the Kennedy Expressway at Montrose Avenue in Chicago, torn down in 2004

The final distinct features are the nine exits in two miles (3.2 km) between mile markers 50 and 51, and the southbound exit to I-290 and Congress Parkway is marked as exits 51H and 51I. While the density of interchanges is quite dangerous, the hazard is partially offset by the fact that exits are 500 feet (150 m) apart on the right hand side, while entrances to the highway were 500 feet (150 m) apart, but on the left side. Known as the "suicide ramps", the entrance ramps on the left had little to no acceleration zone, and traffic on the ramps could not see mainline traffic until the last 500 feet (150 m) of the ramp. The 2009–10 reconstruction between Hubbard Street and the Circle Interchange improved safety by increasing the lengths of most entrance ramps and reduced bottlenecks by better utilizing the existing space.

The Kennedy Expressway was the location of a large Magikist lips flashing sign which was a Chicago pop culture icon for many years. Located at the southeast corner where Montrose Avenue abutted the expressway, the sign was torn down in 2004.

The entire route is in Cook County.