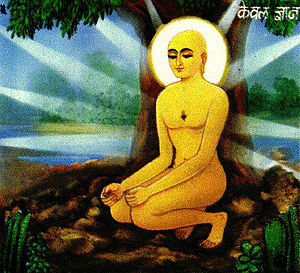 Kevala jñāna means omniscience in Jainism and is roughly translated as absolute knowledge[1] or supreme knowledge.[2]

Kevala jnana is believed to be an intrinsic quality of all souls. This quality is masked by karmic particles that surround the soul. Every soul has the potential to obtain omniscience by shedding off these karmic particles. Jain scriptures speak of twelve stages through which the soul achieves this goal. A soul who has attained kevala jnana is called a kevalin (केवलिन्)[3] According to the Jains, only kevalins can comprehend objects in all aspects and manifestations; others are only capable of partial knowledge.[4]

The views of two sects of Jainism, Digambara and Śvētāmbara Jains slightly differ on the subject of kevalins. According to Digambaras, a kevalin does not experience hunger or thirst, whereas according to Svetambaras, a kevalin has normal human needs.[5] According to both traditions, the last kevalin was a disciple of one of the eleven chief disciples of the last tirthankara, Mahāvīra; his name is recorded as Jambuswami.[6] It is also believed that no one after Jambuswami will have the ability to obtain kevala jnana.

The claim of existence of omniscience by Jains, who deny the existence of a creator god, is a unique phenomenon.[7] The Sutrakritanga text of the Svetambara school, elaborates the concept as all-knowing and provides details of his other qualities.[8] Another text, the Kalpa Sūtra, gives details of Mahavira's omniscience

When the Venerable Ascetic Mahavira had become a Jina and Arhat (Arihant), he was a Kevali, omniscient and comprehending all objects; he knew and saw all conditions of the world, of gods, men, and demons: whence they come, whither they go, whether they are born as men or animals or become gods or hell-beings (upapada), the ideas, the thoughts of their minds, the food, doings, desires, the open and secret deeds of all the living beings in the whole world; he the Arhat (Arihant), for whom there is no secret, knew and saw all conditions of all living beings in the world.:[9]

Immediately after the death of Mahavira, his disciple Gautama became a kevalin.[10] As per the tradition, the teachings of the tirthankara were memorized and preserved over many centuries.[11]

In the second Upanga Agama, the Rājapraśnīya, there is a dialogue between Kesi, a disciple of Pārśva, and Payasi, a materialist king. In this dialogue, Kesi proves the existence of jiva and its ability to obtain kevala jñana to the king.[12]

The Jains have a long debate with Hindus and Buddhists regarding omniscience. Bhikkhu Dhamakriti criticized the Jain notion of omniscience in his Pramanavartika. The Hindu philosopher Kumarila argued that only Veda had the authority to define human moral values since they were "beginningless, authorless and of self-sufficient validity". In response, the Jain monk Haribhadra (c. 8th century CE) wrote that humans already had knowledge of everything knowable. It only had to be illuminated or uncovered.[13] Omniscience was, according to Haribhadra, inherent to living beings.[14]

Objects that are minute (like atoms), past (like Lord Rama), and distant (like Mount Meru), being the objects of inference (anumeya – and, therefore, also objects of knowledge – prameya), must be perceivable directly by someone; like the fire on the hill is an object of inference for a distant person but is perceived directly by the one who is in its proximity. The one who perceives directly the objects of knowledge that are minute, past, and distant is the Omniscient (sarvajña); this way the existence of the Omniscient is truly and firmly established.

Jains contrast all attempts to proclaim absolute truth with adhgajanyāyah, which can be illustrated through the parable of the "blind men and an elephant". In this story, each blind man felt a different part of an elephant (trunk, leg, ear, etc.). All the men claimed to understand and explain the true appearance of the elephant, but could only partly succeed, due to their limited perspectives.[21] This principle is more formally stated by observing that objects are infinite in their qualities and modes of existence, so they cannot be completely grasped in all aspects and manifestations by finite human perception. According to the Jains, only the Kevalis—omniscient beings—can comprehend objects in all aspects and manifestations; others are only capable of partial knowledge.[22] Consequently, no single, specific, human view can claim to represent absolute truth.

According to Jain texts, there are fourteen stages (gunasthana) of spiritual development. The soul can gradually frees itself, firstly from the worst, then from the less bad and finally from all kinds of karma, and manifests the innate qualities of knowledge, belief and conduct in a more and more perfect form. The first four gunasthana are related to belief or rationality in perception. As and when the soul acquires rationality in perception it moves on to 4th gunasthana. Stages 5 to 14 relate to conduct. The purity in conduct determines the gunasthana from 5th stage onwards. Those who have taken the anuvratas {minor vows} may reach up to the 5th Gunasthana. The 6th to 14th Gunasthanas can only be attained by those who have taken the Mahavratas (major vows) of Jain ascetic.[23] Following are the stages of spiritual development:[24][25]