Khan, Kahn (Mongolian: хан/khan; Turkish: kağan or hakan; Azerbaijani: xan; Ottoman: han; Old Turkic: 𐰴𐰍𐰣, kaɣan; Chinese: 可汗, kèhán; Goguryeo : 皆, key; Silla: 干, kan; Baekje: 瑕, ke; Manchu: ᡥᠠᠨ, Pashto: خان Urdu: خان‎, Balochi: خان Hindi: ख़ान; Nepali: खाँ Bengali: খ়ান; Bulgarian: хан,[1] Chuvash: хун, hun) is an originally Mongol title for a sovereign or for military ruler, widely used by medieval nomadic Mongolic and Turkic tribes living to the north of China. "Khan" also occurs as a title in the Xianbei confederation[2] for their chief between 283 and 289.[3] The Rourans were the first people who used the titles khagan and khan for their emperors, replacing the Chanyu of the Xiongnu, whom Grousset and others assume to be Turkic.[4] Subsequently the Ashina adopted the title before the Mongols brought it to the rest of Asia. In the middle of the sixth century the Iranians knew of a "Kagan – King of the Turks".[2]

Khan now has many equivalent meanings such as "commander", "leader", or "ruler". As of 2015[update] khans exist in South Asia, Central Asia, Eastern Europe and Turkey. The female alternatives are Khatun and Khanum. These titles or names are sometimes written as Han, Kan, Hakan, Hanum, or Hatun (in Turkey) and as "xan", "xanım" (in Azerbaijan). Various Mongolic and Turkic peoples from Central Asia gave the title new prominence after period of the Mongol Empire (1206–1368) in the Old World and later brought the title "khan" into Northern Asia, where locals later adopted it. Khagan is rendered[by whom?] as Khan of Khans. It was the title of Chinese Emperor Emperor Taizong of Tang (Heavenly Khagan, reigned 626 to 649), and also the title of Genghis Khan and of the persons selected to rule the Mongol Empire. For instance Möngke Khan (reigned 1251-1259) and Ogedei Khan (reigned 1229-1241) would be "Khagans" but not Chagatai Khan, who was not proclaimed ruler of the Mongol Empire by the kurultai.[5]

The usage of the word "khan" is firstly shown in Korean history of Silla Dynasty. Originally khans headed only relatively minor tribal entities, generally in or near the vast Eurasian steppe, the scene of an almost endless procession of nomadic people riding out into the history of the neighbouring sedentary regions. Some managed to establish principalities of some importance for a while, as their military might repeatedly proved a serious threat to such empires as China and kingdoms in Central Asia.[citation needed][tone]

One of the earliest notable examples of such principalities in Europe was Danube Bulgaria (presumably also Old Great Bulgaria), ruled by a khan or a kan at least from the 7th to the 9th century. It should be noted that the title "khan" is not attested directly in inscriptions and texts referring to Bulgar rulers – the only similar title found so far, Kanasubigi, has been found solely in the inscriptions of three consecutive Bulgarian rulers, namely Krum, Omurtag and Malamir (a grandfather, son and grandson). Starting from the compound, non-ruler titles that were attested among Bulgarian noble class such as kavkhan (vicekhan), tarkhan, and boritarkhan, scholars derive the title khan or kan for the early Bulgarian leader – if there was a vicekhan (kavkhan) there was probably a "full" khan, too. Compare also the rendition of the name of early Bulgarian ruler Pagan as Καμπαγάνος (Kampaganos), likely resulting from a misinterpretation of "Kan Pagan", in Patriarch Nicephorus's so-called Breviarium[6] In general, however, the inscriptions as well as other sources designate the supreme ruler of Danube Bulgaria with titles that exist in the language in which they are written – archontеs, meaning 'commander or magistrate' in Greek, and knyaze, meaning "duke" or "prince" in Slavic. Among the best known Bulgar khans were: Khan Kubrat, founder of Great Bulgaria; Khan Asparukh, founder of Danubian Bulgaria (today's Bulgaria); Khan Tervel, who defeated the Arab invaders in 718 Siege of Constantinople (718), thus "saving Europe"; Khan Krum, "the Terrible". "Khan" was the official title of the ruler until 864 AD, when Kniaz Boris (known also as Tsar Boris I) adopted the Eastern Orthodox faith.[citation needed] 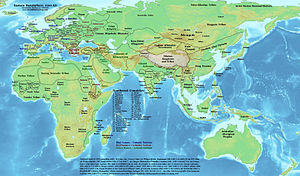 The title Khan became unprecedently prominent when the Mongol Temüjin created the Mongol empire, the greatest land empire the world has ever seen, which he ruled as Genghis Khan. His title was khagan, or "Khan of Khans", but has often been abbreviated to Khan (rather like the Persian Shahanshah -also meaning "King of Kings"- is usually called Shah, equally incorrect, in most Western languages) or described as "Great Khan" (like the Ottoman Padishah being called "Great Sultan"). The great leader was regarded as a khan in the middle east and Asia. Ming Dynasty Chinese Emperors also used the term Xan to denote brave warriors and rulers. The title Khan was used to designate the greatest rulers of the Jurchens, who, later when known as the Manchus, founded the Manchu Qing dynasty.

Once more, there would be numerous khanates in the steppe in and around Central Asia, often more of a people than a territorial state, e.g.:[citation needed]

While most Afghan principalities were styled emirate, there was a khanate of ethnic Uzbeks in Badakhshan since 1697.

There were various small khanates in and near Transcaucasia and Ciscaucasia established by the Iranian Safavids, or their successive Iranian Afsharid and Qajar dynasties outside their territories of Persia proper. For example, in present Armenia and nearby territories to the left and right, there was the khanate of Erivan (sole incumbent 1807–1827 Hosein Quli Khan Qajar). Diverse khanates existed in Dagestan (now part of Russia), Azerbaijan, including Baku (present capital), Ganja, Jawad, Quba (Kuba), Salyan, Shakki (Sheki, ruler style Bashchi since 1743) and Shirvan=Shamakha (1748–1786 temporarily split into Khoja Shamakha and Yeni Shamakha), Talysh (1747–1814); Nakhichevan and (Nagorno) Karabakh.

As hinted above, the title Khan was also common in some of the polities of the various – generally Islamic – peoples in the territories of the Mongol Golden Horde and its successor states, which, like the Mongols in general, were commonly called Ta(r)tars[7] by Europeans and Russians, and were all eventually subdued by Muscovia which became the Russian Empire. The most important of these states were:[citation needed] 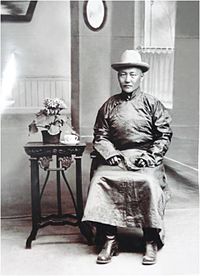 Navaanneren, Minister of the Interior, who along with the 23rd Tushiyetu Khan Dorjsurenkhoroljav (1908-1937) was the last Khan in Mongolia. He was executed during the great purges of 1937. 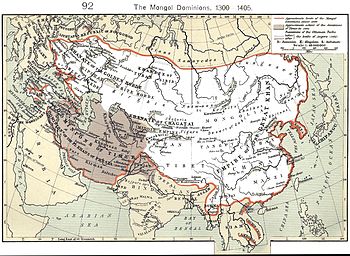 The higher, rather imperial title Khaqan ("Khan of Khans") applies to probably the most famous rulers known as Khan: the Mongol imperial dynasty of Genghis Khan (his name was Temüjin, Genghis Khan a never fully understood unique title), and his successors, especially grandson Kublai Khan: the former founded the Mongol Empire and the latter founded the Yuan Dynasty in China. The ruling descendants of the main branch of Genghis Khan's dynasty are referred to as the Great Khans.[citation needed]

The title Khan of Khans was among numerous titles used by the Sultans of the Ottoman empire as well as the rulers of the Golden Horde and its descendant states. The title Khan was also used in the Seljuk Turk dynasties of the near-east to designate a head of multiple tribes, clans or nations, who was below an Atabeg in rank. Jurchen and Manchu rulers also used the title Khan (Han in Manchu); for example, Nurhaci was called Genggiyen Han. Rulers of the Göktürks, Avars and Khazars used the higher title Kaghan, as rulers of distinct nations.[citation needed] 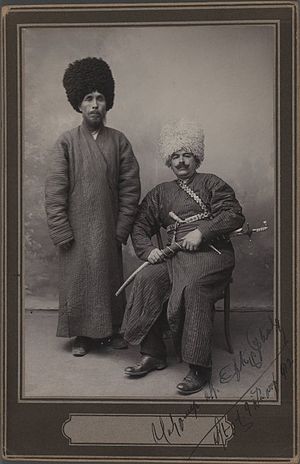 In imperial Persia, Khan (female form Khanum in Persia) was the title of a nobleman, higher than Beg (or bey) and usually used after the given name. At the Qajar court, precedence for those not belonging to the dynasty was mainly structured in eight classes, each being granted an honorary rank title, the fourth of which was Khan, or in this context synonymously Amir, granted to commanders of armed forces, provincial tribal leaders; in descending order. In neighboring Ottoman Turkey and subsequently the Republic of Turkey, the term Khanum was and is still written as Hanım in Turkish/Ottoman Turkish language. The Ottoman title of Hanımefendi (lit translated; lady of the master), is also a derivative of this.

The titles Khan (the lowest commonly awarded) and Khan Bahadur Mongolic root baghatur, related to the Mongolian baatar ("brave, hero"); were also bestowed in feudal India by the Mughals (whose protocol was largely Persian-inspired) upon Muslims, and later by the British Raj, as an honor akin to the ranks of nobility, often for loyalty to the crown. Khan Sahib was another title of honour, one degree higher than Khan, conferred on Muslims; again like Khan Bahadur, it was also awarded with a decoration during British rule.[citation needed]

In the major South Asian Muslim state of Hyderabad, Khan was the lowest of the aristocratic titles bestowed by the ruling Nizam upon Muslim retainers, ranking under Khan Bahadur, Nawab (homonymous with a high Muslim ruler's title), Jang, Daula, Mulk, Umara, Jah. The equivalent for the courts Hindu retainers was Rai. In Swat, a Pakistani Frontier State, it was the title of the secular elite, who together with the Mullahs (Muslim clerics), proceeded to elect a new Amir-i-Shariyat in 1914. It seems unclear whether the series of titles known from the Bengal sultanate are merely honorific or perhaps relate to a military hierarchy.[citation needed]

Khan is a surname as well as an honor. Some of the Hindu Brahmins also worked for Mahan Mugal Samrat Akbar (AD 1556) and so Akbar honored them as a Khan. Because of this they are using the last name as Khan, but they still belong to Hindu Brahmins.

Like many titles, the meaning of the term has also extended downwards, such as in Afghanistan, Pakistan, and Central Asian nations, where it has become a common surname.

Khan and its female forms occur in many personal names, generally without any nobiliary of political relevance, although it remains a common part of noble names as well. Notably in South Asia it has become a part of many South Asian Muslim names, especially when Pathan descent is claimed. It is also used by many Muslim Rajputs of India and Pakistan were awarded this surname by Turkic Mughals for their bravery.[14] Similarly it was awarded to Pashtuns by Turkic and Mongol kings but also the name is claimed to be related to the Hebrew name Cohen or Kohen. The more plausible explanation is the Hun origin of the Pashtuns. Hun in its original pronunciation is Khun and thus Khan. To this day in India a Pashtun is ordinarilly called Khan Sahib regardless of whether his surname contains that word or not.[citation needed]

During the Russian Civil War following the Bolshevik takeover of 1917, White general Roman von Ungern-Sternberg, who, admittedly was trying to reconstitute the empire of Genghis Khan, was often styled as "Ungern Khan" between 1919 and his death in 1921.[citation needed]