From Infogalactic: the planetary knowledge core
Jump to: navigation, search
This article is about the district. For its eponymous headquarters, see Kheda.

Kheda District (Gujarati: ખેડા જિલ્લો) is one of the thirty-three districts of Gujarat state in western India. Nadiad city is the administrative headquarters of the district. 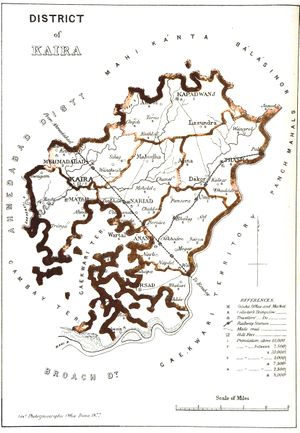 Formerly known as Kaira District, in 1997 it was divided in two with the southern part becoming Anand District.[1] The Charotar region of Kaira consisted of four taluka: Anand, Borsad, Nadiad, and Petlad.[2] When the district was divided, Nadiad Taluka went with Kheda District and the other three with Anand District.[3]

During the struggle for independence in the first half of the 20th century, the Patidars of the Charotar region and other areas in Kaida resisted the British in a number of standoffs, notably the Kaira anti-tax campaign of 1913, the Borsad satyagraha of 1923,[4] and the Bardoli satyagraha of 1928.[5]

Dakor houses a temple of Lord Ranchodrai, a form of Krishna. The temple town of Vadtal, Bochasan & Nadiad comes within this district.

In the early 1980s, palaeontologists stumbled upon dinosaur bones and fossils during a regular geological survey of Balasinor in Kheda District, later identified as Rajasaurus narmadensis (Latin for "princely lizard from the Narmada Valley". It was the first dinosaur fossil discovery in India.

The find sent ripples of excitement through neighbouring villages and many residents collected what fossilised eggs they could find., brought them home and worshipped them.[10] Since then, excavations have thrown up a veritable trove of dinosaur remains - eggs, bones, and a skeleton which is now kept in a Kolkata museum - bringing hordes of scientists and tourists to the place.

Piecing together the evidence in Balasinor, researchers now believe that Gujarat is home to one of the largest clutch of dinosaur hatcheries in the world. At least 13 species of dinosaurs lived here, possibly for more than 100 million years until their extinction some 66 million years ago. The soft soil made hatching and protecting eggs easier for the animals. So well-protected are the fossilised eggs found here that many researchers call them the best-preserved eggs in the world after the ones found in Aix-en-Provence in France.

These fossilised dinosaur remains triggered off what tourism officials in Gujarat referred to as "dinosaur tourism".