The King Power Stadium (also known as Leicester City Stadium)[2] is a football stadium located in Leicester, England. It is the home ground of Leicester City, who currently compete in the Premier League. The all-seater stadium, inaugurated in July 2002, has a capacity of 32,262 and is the 19th largest stadium by capacity in England. The stadium is named after travel retail group King Power,[3] which is a company owned by the club's owners.

Leicester's previous stadium was at nearby Filbert Street, which had been their home since 1891. It was gradually upgraded during the 20th century and with the advent of the Taylor Report in January 1990 requiring all clubs in the top two divisions to have all-seater stadiums by August 1994, Leicester City's directors began to investigate the possibility of building a new stadium during the early 1990s, but initially decided to take the redevelopment option by building a new stand on one side of Filbert Street and fitting seats into the remaining standing areas, giving the stadium a 21,500 all-seated capacity by the 1994–95 season.

Filbert Street's conversion to an all-seater stadium coincided with their promotion to the Premier League after a seven-year exile from the top flight, and with their relegation after just one season it appeared that the 21,500 capacity would be adequate.

However, success in the late 1990s saw crowds rise, which meant that virtually every game at Filbert Street was a sell-out by the end of the decade. Relocation was soon back on the cards; several similar sized clubs had relocated to new stadiums around this time, including Leicester's midland rivals Stoke City and Derby County.

Some parts of the ground – the East and North Stands in particular – were also somewhat outdated, which led the manager, Martin O'Neill to joke that when he showed Filbert Street to new signings he led them backwards out of the players tunnel to prevent them from seeing the East Stand.

In early 1998, plans were announced for a 40,000 all-seater stadium to be built at Bede Island South in time for the 2000–01 season, but these plans were abandoned on 5 January 2000. Chairman John Elsom vowed that other options, including relocation to another site or even further redevelopment of Filbert Street, would be considered, hoping that either option would have materialised by August 2002.[4]

The relocation option was soon settled upon, as plans were unveiled on 2 November 2000 for a 32,000-seat stadium at nearby Freeman's Wharf, with 2003–04 being the expected completion date, although it was suggested at the time relocation could happen at the start of the 2002–03 season.[5] Work on the stadium began in the summer of 2001, and by 10 October that year it was confirmed that the new stadium would be ready for the 2002–03 season.[6]

The stadium was completed on time in the summer of 2002, ready for Leicester to take up residence for the start of the 2002–03 season. However, it was not an easy start at their new stadium as they had just been relegated from the Premier League and were more than £30 million in debt.

The stadium also has under-soil heating.

The record attendance for football is 32,242 for Leicester City against Sunderland for the first game of the 2015–16 Premier League season. The overall record attendance is 32,488 for a rugby union match between Leicester Tigers and Bath in 2006. This is because this rugby match took place prior to seats being removed to provide segregation of rival football fans, reducing the capacity of the ground from exactly 32,500 to 32,262.[7]

The stadium was officially opened by former Leicester striker Gary Lineker on 23 July 2002. He used a giant pair of scissors to cut a ribbon on the pitch after arriving at the stadium in a Walkers lorry. The first game at the new stadium was a friendly against Spanish team Athletic Bilbao, on 4 August 2002. The game finished 1–1, with Tiko scoring the first goal at the stadium, and Jordan Stewart scoring Leicester's first goal. The attendance was approximately 24,000 (no official figure was recorded due to a computer problem). The first competitive match took place six days later and Leicester beat Watford 2–0 in front of a near-capacity crowd of 31,022. Brian Deane scored both goals, including the stadium's first in competitive games. Leicester ended the 2002–03 season promoted back to the Premier League, losing just two home games in the season, despite spending the early part of the season in receivership due to their huge debts, until a takeover deal was completed.

The £37 million cost of the new stadium, combined with relegation from the Premiership, the collapse of the English transfer market due to the introduction of the transfer window and the collapse of ITV Digital meant that Leicester went into receivership shortly after moving to the new stadium. Birse Construction who had built the stadium therefore lost a large part of their fee, and they withdrew from any further football ground construction. The main losers from this were Leicester's local rivals Coventry City, who were in negotiations with Birse to build their own new stadium.

As part of the deal which brought the club out of receivership, the ownership of the stadium reverted to American academic retirement fund TIAA–CREF, who had supplied £28 million via a bond scheme towards the stadium's construction, with the club taking a long-term lease while the bond repayments were made.

In 2015, vice-chairman Aiyawatt Srivaddhanaprabha stated that plans were in place to increase the capacity of the ground to around 42,000.[8] 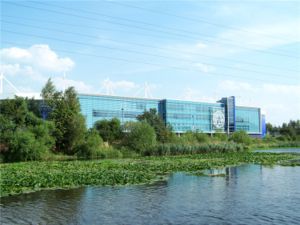 The King Power Stadium from the River Soar

In 2002, former Leicester City shirt sponsors Walkers signed a ten-year deal for naming rights. The agreement was superseded halfway through the period, in May 2007, when they again paid a "seven-figure sum" to extend their sponsorship of the stadium until 2017.[9] Originally the ground was to have been called the "Walkers Bowl," but that name was dropped after a fans' petition against it. Fans criticised the name for having only the name of the sponsor in it, and no Leicester City reference, such as "Filbert," "Fosse" or "Foxes," while some fans objected to "Walker's Bowl" on the grounds that the name too "American" (referring to the American college football bowl game concept). As a result of the petition, the name was quickly changed to the "Walkers Stadium"; however, some fans were still unhappy with the name, and it was sometimes referred to (usually derogatorily) as the "crisp bowl," in reference to Walkers best known products. Many fans refer to the stadium as Filbert Way after the ground's address, retaining a link with the past. The naming rights were sold to King Power for the 2011–12 season.

For the 2015 Rugby World Cup, the stadium was known as the Leicester City Stadium.[2]

During their absence from Wembley Stadium, the England national football team played a home friendly game against Serbia and Montenegro at the stadium on 3 June 2003. Goals from Steven Gerrard and Joe Cole gave England a 2–1 victory. On 12 October of the same year, the ground hosted an international friendly match between Brazil and Jamaica, with Roberto Carlos scoring the winner.[10][11]

On 20 May 2006, the stadium hosted the Football Conference playoff final between Hereford United and Halifax Town. A goal in extra time gave Hereford a 3–2 win and promotion to the Football League. Nine days later, the ground was also the venue for another international friendly, with Ghana beating Jamaica 4–1.

On October 12, 2007, it hosted England’s under-21’s 2009 UEFA European Under-21 Championship qualification Group 3 match against Montenegro’s under-21’s. The hosts edged out the visitors 1 - 0 with Matt Derbyshire’s goal.

On 30 July 2011, Leicester City played a strong Real Madrid side in the Npower Cup in front of a record 32,188 home fans, with star players such as Ronaldo and Kaká playing for Madrid. After falling behind to a first-half goal from José Callejón and a second on the hour from Karim Benzema, Sven-Göran Eriksson's men pulled a goal back a minute from the end through substitute Lloyd Dyer.

On 8 August 2015, Leicester City hosted Sunderland at the King Power Stadium for the first game of the 2015–16 Premier League. The stadium attendance for the match was 32,242, which is thought to be the largest-ever league attendance at the ground since it opened in 2002.

The King Power Stadium has four stands that are all joint together. The East Stand, West Stand, North Stand and the Spion Kop South Stand. The away supporters are located in the corner between the North and East Stand. The North Stand is also referred to as the Family Stand or Family Area.

In 2004, the United Kingdom's best supported rugby union club, Leicester Tigers, considered sharing the stadium with Leicester City as their own 16,815-capacity ground at Welford Road was considered too small to handle the growing popularity of rugby. The plan would have seen the two clubs form a jointly owned company to buy the stadium from Teachers. The deal was abandoned in 2005 as the clubs failed to fully agree terms. Because of the continued parlous state of the football club's finances, rumours that groundsharing was still being discussed continued to circulate, with some suggestions that Tigers were considering buying the stadium outright from Teachers. In 2007, a permanent groundshare seemed to be ruled out as Leicester Tigers received planning consent for a major expansion of their own Welford Road venue with a new 10,500-seat stand taking Welford Road to a capacity of 24,500.

However, Tigers have played six matches at the stadium The first three were either to capitalise on the larger capacity with the greater interest in high-profile games or when competition rules demanded that the match be played away from their normal home ground while the other three was due to the demolition of the old Caterpillar Stand at Welford Road.

* Played in front of a sell-out crowd of 32,500, which is the record attendance for the stadium. (This number is unlikely to be equalled for a football match, unless the stadium is expanded due to crowd segregation requirements.)

With the expansion of Welford Road under way it is likely that the only rugby games to be played at the Walkers Stadium in future will be European Cup semi-finals when Leicester Tigers are drawn at "home," which enables them to propose a suitable English venue away from their home ground.

It also hosted an exhibition match between World XV and South Africa XV on December 3, 2006 to mark the centenary of the Springboks' first game abroad.[12] South Africa won 32 - 7.