King of the Romans

From Infogalactic: the planetary knowledge core
Jump to: navigation, search
This article is about the title in the Holy Roman Empire. For uses in antiquity, see King of Rome and Domain of Soissons. 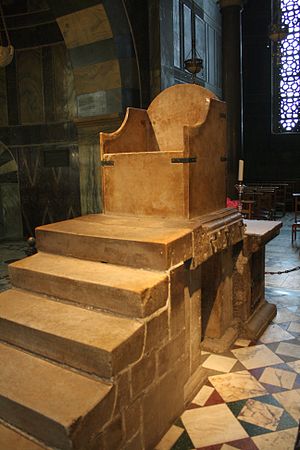 The royal throne of Charlemagne, in Aachen Cathedral

King of the Romans (Latin: Romanorum Rex; German: Römisch-deutscher König) was, from the time of Emperor Henry II (1014–1024), the title used by the German king following his election by the princes. The title was predominantly a claim to become Holy Roman Emperor, a title, which in contemporary views of the Middle Ages, also had a religious aspect and was dependent on the coronation by the Pope.

The title originally referred to any elected king who had not yet been granted the Imperial Regalia and title of "Emperor" at the hands of the Pope; later it came to be used solely for the heir apparent to the Imperial throne between his election (during the lifetime of a sitting Emperor) and his succession on the Emperor's death.

Contemporary sources did not refer to the territory of East Francia as Regnum Teutonicum (Latinised from Old High German diutisc, i.e. Kingdom of Germany) until the 11th century. During that time, the king's claim to coronation was increasingly contested by the papacy, culminating in the fierce Investiture Controversy: After the Salian heir apparent Henry IV, a six-year-old minor, had been elected to rule the Empire in 1056, Romanorum Rex became his standard title to emphasize the sacred entitlement to be crowned Emperor by the Pope. Nevertheless Pope Gregory VII insisted on using the derogatory term Teutonicorum Rex ("King of the Germans") in order to imply that Henry's authority was merely local and did not extend over the whole Empire. In reaction to Gregory's usage, Henry began to regularly use the title Romanorum Rex until he finally was crowned Emperor by Antipope Clement III in 1084. Henry's successors imitated this practice, and were called Romanorum Rex before and Romanorum Imperator after their Roman coronation.

Candidates for the kingship were at first the heads of the German stem duchies; as these units broke up over time, rulers of smaller principalities and even non-German rulers came to be considered for the position. The only requirements generally observed were that the candidate be an adult male, a Catholic Christian, and not in holy orders. The kings were elected by several Imperial estates (secular princes as well as Prince-Bishops), since 1147 commonly in the Imperial city of Frankfurt, a custom recorded in the Schwabenspiegel code about 1275.

Originally all noblemen present could vote per unanimous acclamation, but later an actual franchise was narrowed to the most eminent bishops and noblemen, and according to the Golden Bull of 1356 issued by Emperor Charles IV only the seven Prince-electors had the right to participate in a majority voting as determined by the 1338 Declaration of Rhense: The Prince-Archbishops of Mainz, Trier and Cologne as well as the King of Bohemia, the Count Palatine of the Rhine, the Saxon duke, and the Margrave of Brandenburg. After the distortions during the Investiture Controversy, Charles intended to strengthen the legal status of the Rex Romanorum beyond papal approbation. Consequently, among his successors, only Sigismund and Frederick III were still crowned emperors in Rome and in 1530 Charles V was the last king to receive the Imperial Crown at the hands of the Pope (in Bologna). As constitutional law, the Golden Bull remained effective until the Empire's dissolution in 1806.

After his election, the new king would proceed to be crowned as King of the Romans (Romanorum Rex), usually at Charlemagne's throne in Aachen Cathedral by the Archbishop of Cologne. Though the ceremony was not more than a symbolic validation of the preceding election result, it was solemnly celebrated. The details of Otto's coronation in 936 are described by the medieval chronicler Widukind of Corvey in his Res gestae saxonicae. At least since the coronation of Conrad II in 1024, the kings received the Imperial Crown. In 1198 the Hohenstaufen candidate Philip of Swabia was crowned Rex Romanorum at Mainz Cathedral, however, he made good for another coronation in Aachen, after he had prevailed against his Welf rival Otto IV—as did Charles IV and King Rupert centuries later.

At some time after the ceremony, the king would, if possible, cross the Alps, and might receive coronation (in Pavia or Milan) with the Iron Crown of Lombardy as King of Italy. Finally he would travel to Rome and be crowned emperor by the pope. As it was rarely possible for the elected King to proceed immediately to Rome for his crowning, several years might elapse between election and coronation; and some Kings never achieved the journey to Rome at all. As suitable title for the King between his election and his coronation as Emperor, Romanorum Rex would stress the plenitude of his authority over the Empire and his warrant to be future Emperor (Imperator futurus) while not infringing upon the Papal privilege. Not all Kings of the Romans made this step, sometimes because of hostile relations to the current Pope, at other times because the pressure of business at home, or warfare in Germany or Italy, made it impossible for the King to make the journey. In such cases, the king might retain the title "King of the Romans" for his entire reign.

The title Romanorum Rex became functionally obsolete after 1508, when, after King Maximilian I failed in a good-faith attempt to journey to Rome, the Pope permitted him to use the title of Electus Romanorum Imperator ("elected Emperor of the Romans"). Maximilian also at this time took the new title "King of the Germans" or "King in Germany" (Germaniae rex, König in Germanien), but the latter was never used as a primary title.

The rulers of the Empire thereafter called themselves "Emperors" without going to Rome or soliciting Papal approval, taking the title as soon as they were crowned in Germany or, if elected as heir to the throne, upon the death of a sitting Emperor.

The following were ruling Kings of the Romans, that is, men who ruled the Kingdom without subordination to another King, but who had not yet been crowned Emperor. 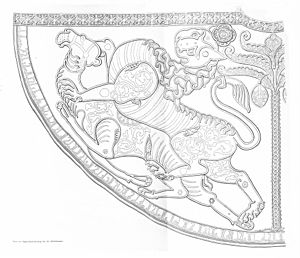 Detail of the imperial coronation mantle, drawing from 1857

The Holy Roman Empire was an elective monarchy. No person had a legal right to the succession simply because he was related to the current Emperor. However, the Emperor could, and often did, have a relative (usually a son) elected to succeed him after his death. This elected heir apparent bore the title "King of the Romans".[1]

The election was in the same form as that of the senior ruler, and theoretically meant that both men were equal co-rulers of the Empire. In practice, however, the actual administration of the Empire was always managed by the Emperor, with at most certain duties delegated to the heir.

The following were subordinate kings to another Holy Roman Emperor (usually, but not always, their father) for the dates specified.

When Napoleon I, Emperor of the French, had a son and heir, Napoleon II (1811–32), he revived the title as King of Rome (Roi de Rome), styling his son as such at birth. The boy was often known colloquially by this title throughout his short life. However, from 1818 onward, he was styled officially by Emperor Francis I of Austria as the Duke of Reichstadt.

This article uses material translated from the corresponding article in the German-language Wikipedia, which, in turn, cites a source that contains further references: