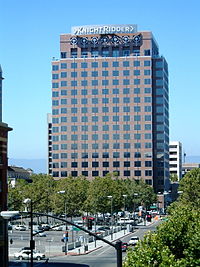 Knight Ridder /ˈrɪdər/ was an American media company, specializing in newspaper and Internet publishing. Until it was bought by The McClatchy Company on June 27, 2006, it was the second-largest newspaper publisher in the United States, with 32 daily newspapers sold. Its headquarters were located in San Jose, California.[1]

The corporate ancestors of Knight Ridder were Knight Newspapers, Inc. and Ridder Publications, Inc. The first company was founded by John S. Knight upon inheriting control of The Akron Beacon Journal from his father, Charles Landon Knight, in 1933; the second company was founded by Herman Ridder when he acquired the New Yorker Staats-Zeitung, a German language newspaper, in 1892. As anti-German sentiment increased between the two world wars, Ridder successfully transitioned into English language publishing by acquiring The Journal of Commerce in 1926.

Both companies went public in 1969 and merged in 1974. For a brief time, the combined company was the largest newspaper publisher in the United States.

Knight Ridder had a long history of innovation in technology. It was the first newspaper publisher to experiment with videotex when it launched its Viewtron system in 1983. After investing six years of research and $50 million into the service, Knight Ridder shut down Viewtron in 1986 when the service's interactivity features proved more popular than news delivery.[2]

In 1997 it bought four newspapers from The Walt Disney Company formerly owned by Capital Cities Communications after Disney's purchase of Cap Cities mainly for the ABC television network (the Kansas City Star, Fort Worth Star-Telegram, Belleville News-Democrat and (Wilkes-Barre) Times Leader) for $1.65 billion. It was, at the time, the most expensive newspaper acquisition in history.

For most of its existence, the company was based in Miami, with headquarters on the top floor of the Miami Herald building. In 1998, Knight Ridder relocated its headquarters from Miami to San Jose, Calif.; there, that city's Mercury News—the first daily newspaper to regularly publish its full content online—was booming along with the rest of Silicon Valley. The internet division had been established there three years earlier. The company rented several floors in a downtown high-rise as its new corporate base.

In November 2005, the company announced plans for "strategic initiatives," which involved the possible sale of the company. This came after three major institutional shareholders publicly urged management to put the company up for sale. At the time, the company had a higher profit margin than many Fortune 500 companies, including ExxonMobil.[3]

On March 13, 2006, The McClatchy Company announced its agreement to purchase Knight Ridder for a purchase price of $6.5 billion in cash, stock and debt.[4] The deal gave McClatchy 32 daily newspapers in 29 markets, with a total circulation of 3.3 million. However, for various reasons, McClatchy decided immediately to resell twelve of these papers.[5]

On April 26, 2006, McClatchy announced it was selling the San Jose Mercury News, Contra Costa Times, Monterey Herald, and St. Paul Pioneer Press to MediaNews Group (with backing from the Hearst Corporation) for $1 billion.[6]

Daily newspapers owned by Knight Ridder and its predecessors included:

A list of companies that were at one time or another owned by Knight Ridder:

Once and Again' needs to high ratings to stay with ABC

In 1954, Ridder Newspapers launched WDSM-TV in Superior, Wisconsin, serving the Duluth, Minnesota market. Initially a CBS affiliate, it switched to its present NBC affiliation a year and a half after the station's launch. It was spun off after Ridder's merger with Knight Newspapers, Inc.

From 1956 to 1962, Knight co-owned a then-NBC affiliate, WCKT in Miami, Florida, with the Cox publishing family.

In 1977, Knight Ridder entered broadcasting with the acquisition of Poole Broadcasting, which consisted of WJRT-TV in Flint, Michigan, WTEN in Albany, New York and its satellite WCDC in Adams, Massachusetts, and WPRI-TV in Providence, Rhode Island. Immediately after the acquisition of these stations was finalized, Knight Ridder cut a corporate affiliation deal with ABC, switching then-CBS affiliates WTEN/WCDC and WPRI (the latter of which eventually rejoined CBS) to ABC (WJRT was already affiliated with ABC when the affiliation deal was made). Knight Ridder would acquire several television stations in medium-sized markets during the 1980s, including three stations owned by The Detroit News which the Gannett Company (which purchased the newspaper in 1986) could not keep due to Federal Communications Commission regulations on media cross-ownership and/or television duopolies then in effect. (Interestingly, none of Knight Ridder's later acquisitions changed their network affiliations under Knight Ridder ownership; for example, then-NBC affiliate WALA-TV in Mobile, Alabama remained an NBC affiliate when it was owned by Knight Ridder and would switch to Fox several years after Knight Ridder sold the station.) In early 1989, Knight Ridder announced its exit from broadcasting, selling all of its stations to separate buyers; the sales were finalized in the summer and early fall of that year.