From Infogalactic: the planetary knowledge core
Jump to: navigation, search
This article is about the song. For the town in Ecuador, see Cumbayá.

"Kumbaya" or "Kumbayah" or "Cumbaya" (Gullah, "Come by Here"—"Kum ba yah") is a spiritual song first recorded in the 1920s. It became a standard campfire song in Scouting and summer camps and enjoyed broader popularity during the folk revival of the 1950s and 1960s.

The song was originally a simple appeal to God to come and help those in need.[1] 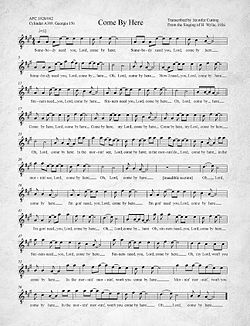 Come By Here / Kum Ba Ya / Kumbaya transcribed by the United States Library of Congress from a 1926 recording.

According to Library of Congress editor Stephen Winick, the two earliest versions whose year of origin is known for certain were both collected in 1926, and both reside in the Library's American Folklife Center. No precise month or day was recorded for either version, so either may be the earliest known version of the song. One was submitted as a high school collecting project by a student named Minnie Lee to her teacher, Julian P. Boyd, later a celebrated historian. This version, collected in Alliance, North Carolina, is a manuscript featuring lyrics but no music. The other 1926 version was recorded on wax cylinder by Robert Winslow Gordon, founder of what began as the Library of Congress's Archive of Folk Song, which became the American Folklife Center. The singer's name was H. Wylie, and the song was recorded within a few hours' drive of Darien, Georgia, although Gordon did not note the exact location. Between 1926 and 1928, Gordon recorded three more versions of traditional spirituals with the refrain "Come by Here" or "Come by Heah". One of these is a different song concerning the story of Daniel in the den of lions. Of the other two, one has been lost, and one cylinder was broken, so it cannot be determined if they are versions of "Kumbaya".[1]

According to an article in Kodaly Envoy by Lum Chee-Hoo, some time between 1922 and 1931, members of an organization called the Society for the Preservation of Spirituals collected a version from the South Carolina coast.[2] "Come by Yuh", as they called it, was sung in Gullah, the creole language spoken by the former slaves living on the Sea Islands of South Carolina and Georgia.[3] It is possible this is the earliest version, if it was collected before 1926. Because the individual songs in this society's publications are not dated, however, it cannot be dated with certainty to before 1931.[1]

In May 1936, John Lomax, Gordon's successor as head of the Archive of Folk Song, discovered a woman named Ethel Best singing "Come by Here" with a group in Raiford, Florida.[4]

These facts contradict the longstanding copyright and authorship claim of Reverend Marvin V. Frey.[2] Rev. Frey (1918–1992) claimed to have written the song circa 1936 under the title "Come By Here," inspired, he claimed, by a prayer he heard delivered by "Mother Duffin," a storefront evangelist in Portland, Oregon. It first appeared in this version in Revival Choruses of Marvin V. Frey, a lyric sheet printed in Portland, Oregon in 1939. In an interview at the Library of Congress quoted by Winick[1] Frey claimed the change of the title to "Kum Ba Yah" came about in 1946, when a missionary family named Cunningham returned from Africa where they had sung Frey's version. According to Frey, they brought back a partly translated version, and "Kum Ba Yah" was an African phrase from Angola (specifically in Luvale). Frey claimed the Cunninghams then toured America singing the song with the text "Kum Ba Yah".[1]

The story of an African origin for the phrase circulated in several versions, spread also by the revival group the Folksmiths, whose liner notes for the song stated that "Kum Ba Yah" was brought to America from Angola.[1] As Winick points out, however, no such word or phrase exists in Luvale or any related language.

Although it is often claimed that the song originated in Gullah, Winick further points out that the Boyd manuscript, which may be the earliest version of the song, was probably not collected from a Gullah speaker. Winick concludes that the song almost certainly originated among African Americans in the Southeastern United States, and had a Gullah version early in its history even if it did not originate in that dialect.[1]

Joe Hickerson, one of the Folksmiths, recorded the song in 1957,[5] as did Pete Seeger in 1958. Hickerson credits Tony Saletan, then a songleader at the Shaker Village Work Camp, for introducing him to "Kumbaya" (Saletan had learned it from Lynn Rohrbough, co-proprietor with his wife Katherine of the camp songbook publisher Cooperative Recreation Service, predecessor to World Around Songs).[2][4][6][7] Joe Hickerson later succeeded Gordon at the American Folklife Center (successor to the Archive of Folk Song).[8] The song enjoyed newfound popularity during the American folk music revival of the early to mid-1960s, largely due to Joan Baez's 1962 recording of the song, and became associated with the Civil Rights Movement of that decade.

The Folksmiths including Joe Hickerson recorded the first LP version of the song in August 1957. As this group traveled from summer camp to summer camp teaching folk songs, they may be the origin of Kumbaya around the campfire.

It was recorded by Pete Seeger in 1958, and The Weavers released it on Traveling on With the Weavers in 1959.

The Journeymen had a minor hit in Vancouver in February, 1962[12]

Joan Baez's 1962 In Concert, Volume 1 included her version of the song. Rabbi Shlomo Carlebach also sang "Kum Bah Yah" in a 1962 concert, a recording of which was subsequently released in 1963 on the album Shlomo Carlebach Sings.

The Seekers recorded it in 1963 for their first album, "Introducing the Seekers". They later re-recorded for their third album, "Hide & Seekers" (also known as "The Four & Only Seekers"); it was re-released on their 1989 album "The Very Best of the Seekers".

It was included on The Sandpipers' 1969 album The Wonder of You.

Raffi recorded it for his Baby Beluga album.

In 1984, the proto-punk band, Guadalcanal Diary, recorded a version on their album Watusi Rodeo.

In 1986, the Kidsongs Kids recorded it on their Kidsongs Video "I'd Like to Teach the World to Sing" for the African segment of the video.

Peter, Paul & Mary recorded Kumbaya on their 1998 Around the Campfire album.

Stacie Orrico used it in a short interlude on her 2000 album Genuine.

German band Guano Apes and German comedian Michael Mittermeier recorded a rap metal cover of "Kum Bah Yah" called "Kumba Yo!" and made a music video ("Kumba yo!" on YouTube). The "Kumba yo!" single was released in 2001.

In 2013, Christian folk-rock band Rend Collective Experiment recorded a version as the opening track on their third album.

The melody of Kumbaya has at times been borrowed for alternate versions that remove the spiritual emphasis:

Recently (as of 2006), "Kumbaya" has been used to refer to artificially covering up deep-seated disagreements. We "join hands and sing 'Kumbaya'" or "it's all 'Kumbaya'" means we pretend to agree, for the sake of appearances or social expediency.[2]

References in movies and TV