Education and the LGBT community

From Infogalactic: the planetary knowledge core
(Redirected from LGBT topics in education)
Jump to: navigation, search 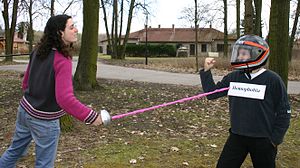 In the recent history of the expansion of LGBT rights, the issue of teaching various aspects of lesbian, gay, bisexual and transgender life and existence to younger children has become a heated point of debate, with proponents stating that the teaching of LGBT-affirming topics to children will increase a sense of visibility for LGBT students and reduce incidences of homophobia or closeted behavior for children, while opponents to the pedagogical discussion of LGBT people to students are afraid that such discussions would encourage children to violate or question religiously or ideologically motivated rejections of non-heterosexuality in private settings (or promote a "homosexual agenda"). Much of the religious and/or social conservative aversion to non-heterosexuality and the broaching of the topic to juveniles tends to occur in regions with a historic demographic dominance or majority of adherents to an Abrahamic religion, particularly the majority of denominations of Christianity, Islam and Judaism, while those who were raised in those religions but advocate or take more favorable/nuanced positions on LGBT issues or are LGBT themselves may often be ostracized from more socially conservative congregations over the issue. 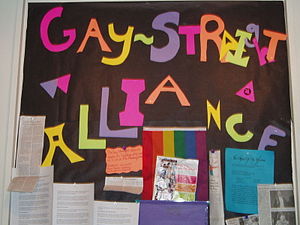 The pride flag, news articles, and flyers for social events on this high school bulletin board represent the diverse support and advocacy purposes that GSAs serve.

LGBT student centers may be organized as offices of the school's administration that offer paid faculty support to students.

The issue of homophobic bullying and violence by students and teachers is increasingly broached by advocates as a reason for the intervention of administration on behalf of LGBT students.

The inclusion of LGBT topics in teaching of history and social sciences are also advocated by topics in order to increase pride and self-respect among LGBT students and reduce shame or self-pity for the lack of emphasis upon famous LGBT persons.

As general sex education often faces fierce opposition from religious congregations which are doctrinally averse to contraception, sex education which includes homosexuality is considered especially egregious among opponents. The matter of sex education often leads more devout Abrahamists to withdraw their children from the school's tutelage, leading to further educational terms which emphasize Abrahamic religious mores, such as abstinence, heterosexuality and monogamy. This aversion is criticized by advocates of sex education who assert that many of the pupils of such education eventually find their own means to those practices or realizations which are expressly forbidden by religious institutions.

Where schools may hold formal engagements such as proms, homecomings and Winter Formals which typically involve set gender roles, issues have arisen with the following:

Various jurisdictions have taken different reactions to such issues, which have resulted in controversy and legal disputes over discrimination by state schools (i.e., the 2010 Itawamba County School District prom controversy).

Campus events have been created for LGBTQ students in order to be inclusive of such students and their allies. These include the queer prom and the Lavender Graduation; the latter was first organized by Dr. Ronni Sanlo, then the director of the LGBT Center at the University of Michigan, in 1995.[1]

Historic legal denigration of non-heterosexuality and non-vaginal sexual intercourse (even among heterosexual partners) continues to have a long-running residual effect on the public discourse. The first gay–straight alliances to be established in public schools in the early 1990s faced stiff opposition from faculty, administration and parents of students, with protests and fierce debates over the matter, but GSAs have since been established for middle school students in a number of jurisdictions.

In California, GSAs now number over 762, representing over 50% of California's public high schools. In 2011, the State Legislature passed the FAIR Education Act, which, if signed into law, would make California the first state in the United States to mandate the teaching of LGBT-affirmative social sciences (i.e., LGBT history) in the public school system and forbid discriminatory language in the school curriculum.

One of the pre-eminent organizations advocating for LGBT education and academic rights in the United States is GLSEN.