Gay tourism or LGBT tourism is a form of niche tourism marketed to gay, lesbian, bisexual and transgender (LGBT) people.[1] They are usually open about their sexual orientation and gender identity but may be more or less open when traveling; for instance they may be closeted at home or if they have come out, may be more discreet in areas known for violence against LGBT people.[2][3]

The main components of LGBT tourism is for destinations, accommodations and travel services wishing to attract LGBT tourists; people looking to travel to LGBT-friendly destinations; people wanting travel with other LGBT people when traveling regardless of the destination and LGBT travelers who are mainly concerned with cultural and safety issues.[4] The slang term gaycation has come to imply a version of a vacation that includes a pronounced aspect of LGBT culture, either in the journey or destination.[5] The LGBT tourism industry includes destinations (tourism offices and CVBs), travel agents, accommodations and hotel groups, tour companies, cruise lines and travel advertising and promotions companies who market these destinations to the gay community.[4] Coinciding with the increased visibility of LGBT people raising children in the 1990s, an increase in family-friendly LGBT tourism has emerged in the 2000s, for instance R Family Vacations which includes activities and entertainment geared towards couples including same-sex weddings. R Family's first cruise was held aboard Norwegian Cruise Lines's Norwegian Dawn with 1600 passengers including 600 children.[6][7]

Major companies in the travel industry have become aware of the substantial money (also known as the "pink dollar" or "pink pound") generated by this marketing niche, and have made it a point to align themselves with the gay community and gay tourism campaigns.[8] According to a 2000 Travel University report, 10% of international tourists were gay and lesbian accounting for more than 70 million arrivals worldwide.[9] This market segment is expected to continue to grow as a result of ongoing acceptance of LGBT people and changing attitudes towards sexual and gender minorities.[4] Outside larger companies, LGBT tourists are offered other traditional tourism tools, such as hospitality networks of LGBT individuals who offer each other hospitality during their travels and even home swaps where people live in each other's homes.[10] Also available worldwide are social groups for resident and visiting gay, lesbian, bisexual and transgender expatriates and friends.[11]

Gay travel destinations are popular among practitioners of gay tourism because they usually have permissive or liberal attitudes towards gays, feature a prominent gay infrastructure (bars, businesses, restaurants, hotels, nightlife, entertainment, media, organisations, etc.), the opportunity to socialize with other gays, and the feeling that one can relax safely among other gay people.[2][4]

Gay travel destinations are often large cities, although not exclusively, and often coincide with the existence of gay neighborhoods. These municipalities and their tourism bureaus often work actively to develop their reputations as places for gays to travel to, commonly by aligning themselves to local gay organisations. Travel analysts state that the existence of a core gay friendly population is often the primary catalyst for the development of a gay-friendly tourist destination.

The LGBT tourism industry represents an estimated annual US $65 billion on gay travel in the USA alone, according to Community Marketing & Insights. In Europe, the gay tourism market has been estimated at €50 billion per year by the Gay European Tourism Association. The adult LGBT community in the USA has a total economic spending power of more than $600 billion per year, according to Wietck Combs. In a study for Philadelphia, Community Marketing & Insights found that for every one dollar invested in gay tourism marketing, $153 was returned in direct economic spending in shops, hotels, restaurants and attractions. Since 2002, there has been a historic rise in gay tourism marketing. Destinations such as Philadelphia, Dallas and Ft. Lauderdale have engaged in gay tourism campaigns.[citation needed]

File:Ipanema LGBT Area - Rio, Brazil.jpg
The LGBT movement flags of view on Ipanema beach in Rio de Janeiro, considered the best gay beach in the world.
File:ParadaSP.jpg
View Gay Parade 2010 in São Paulo, Brazil registered the presence of more than 3 million people and is considered the largest gay parade of the world.

The International Gay and Lesbian Travel Association (IGLTA) holds an annual world convention and four symposia in different tourism destinations around the world.[13] Each symposium attracts over 100 representatives of tour agencies and travel publications that specialise in the gay and lesbian market. The association was founded in 1983, and it currently represents over 2000 members. Its headquarters are in Fort Lauderdale, Florida.[14]

The "14th International Conference on Gay & Lesbian Tourism" will be held in Fort Lauderdale, FL 11–13 December 2013. Conference is produced by Community Marketing & Insights, an LGBT market research and communications firm.

With nine issues a year, Passport Magazine is currently the only gay and lesbian travel magazine still in publication in the United States. It is available internationally through iPad and Nook. Spartacus International and FunMaps of Maplewood, New Jersey have promoted gay- and lesbian-friendly businesses since 1982 and publish free guides in print and online for over 30 resort areas and major cities throughout the United States and Canada. Each FunMap contains detailed street maps, business directories (hotels, bars, restaurants, shops and service), community resources, curated editorial, full color display advertisements and quick response codes, all of which welcome and invite gay and lesbian patronage., One of Europe's gay and lesbian travel marketing specialists is Out Now Consulting.

In July 2004 Rosie O’Donnell launched “R Family Cruises” the first cruise that is specifically designed for and directed at LGBT parents with kids. They are also expanding to offer noncruise vacations as well. Since many LGBT friendly resorts and hotels have a no kids policy LGBT families have limited options of traveling (with the whole family) within their own community now thanks to “R Family Cruises” they now have more options.

Throughout the country there are also LGBT camps that help families “struggling with their unusual circumstances”. They can serve as a kind of therapy for families since they are with others they can relate to- making these camps become more popular. The camps offer fun activities like swimming, horseback riding, and campfires but they also offer confidence-building workshops, affirmation exercises, and social justice programs- all very important offerings to the LGBT community. 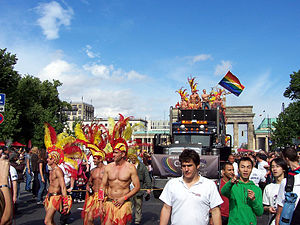 “Gay Days at Disney World in Orlando, FL” held the first weekend in June is one of the biggest unofficial gay pride events in the world. Since Gay Days started about 150,000 people attend this six-day event that includes “17 pool parties, a business expo, a comic-book convention, a film festival, an after-hours trip to a Disney water park (think dance music and guys in very small swimsuits), bobble-head painting, and tie-dying for the kids, rivers of alcohol for the adults, and on June 5th the great culmination: 20,000 to 30,000 lesbians, gays, and their families and friends descending on Disney World, everyone clad in red shirts to signify their presence. (Cloud)”

Seattle Pridefest. held at the last weekend of June, is the largest free pride festival in the country. It includes the Capitol Hill Pride Festival that has outdoor stages, a Kids Zone that has family entertainment until 6pm- events after 6pm are 21 and over. Then on Sunday is the Gay Pride Parade that goes through downtown Seattle and ends at a larger festival at the Seattle Center. It includes “4 stages, world-class entertainment, action and advocacy for the LGBT community, and thousands of vendors.

The IGLTA website is notably one of the most popular websites for resources on LGBT travel; they include a trip planner of many different places around the world, an extensive list of upcoming gay-friendly events around the world, and a “specials” page; where you can find deals on car rentals, hotels, and more.

Expedia now offers a gay travel search option and a gay travel expedia page. On here is a list of the top and most popular LGBT friendly hotels, the most famous LGBT events, and top gay travel destinations including San Francisco, New Orleans, Curaçao, and Amsterdam. Each travel destination includes a blurb about, good places to stay, things to do, romantic places, nightlife, and “know before you go.”

GayCities is a unique travel website that uses the advantage of social networking. It is a LGBT tourism website where people can read and share their opinions on different places and suggest new places. You can search and follow people that have the same “tastes and interests” as you. You can also add photos and post questions on their discussion boards.

OutOfOffice.com is a new UK based full service gay travel agency launching in 2015 which offers experiences and gay-friendly stays worldwide.

Report on the number and value of gay European tourists - by GETA - the Gay European Tourism Association (2013).