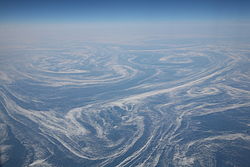 Photo of eddies in the Labrador Current 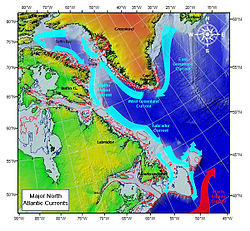 The Labrador Current is a cold current in the North Atlantic Ocean which flows from the Arctic Ocean south along the coast of Labrador and passes around Newfoundland, continuing south along the east coast of Nova Scotia. It is a continuation of the West Greenland Current and the Baffin Island Current.

It meets the warm Gulf Stream at the Grand Banks southeast of Newfoundland. The combination of these two currents produces heavy fogs and also created one of the richest fishing grounds in the world.

In spring and early summer, this current transports icebergs from the glaciers of Greenland southwards into the trans-Atlantic shipping lanes. The waters of the Labrador Current have a cooling effect on the Canadian Atlantic provinces and USA upper Northeast coast from Maine south to Massachusetts.

The Labrador Current has a tendency to sometimes go farther south and/or east than normal. This can produce hazardous shipping conditions as it can carry icebergs into an area of the Atlantic where they are not usually found. The current has been known to transport icebergs as far south as Bermuda and as far east as the Azores. The International Ice Patrol was set up to track icebergs, including those found in areas of the ocean where they are rarely located.[2]