Lactobacillales or lactic acid bacteria (LAB) are a clade of Gram-positive, low-GC, acid-tolerant, generally nonsporulating, nonrespiring, either rod- or cocci-shaped bacteria that share common metabolic and physiological characteristics. These bacteria, usually found in decomposing plants and milk products, produce lactic acid as the major metabolic end product of carbohydrate fermentation. This trait has, throughout history, linked LAB with food fermentations, as acidification inhibits the growth of spoilage agents. Proteinaceous bacteriocins are produced by several LAB strains and provide an additional hurdle for spoilage and pathogenic microorganisms. Furthermore, lactic acid and other metabolic products contribute to the organoleptic and textural profile of a food item. The industrial importance of the LAB is further evidenced by their generally recognized as safe (GRAS) status, due to their ubiquitous appearance in food and their contribution to the healthy microflora of human mucosal surfaces. The genera that comprise the LAB are at its core Lactobacillus, Leuconostoc, Pediococcus, Lactococcus, and Streptococcus, as well as the more peripheral Aerococcus, Carnobacterium, Enterococcus, Oenococcus, Sporolactobacillus, Tetragenococcus, Vagococcus, and Weissella; these belong to the order Lactobacillales.

The lactic acid bacteria (LAB) are either rod-shaped (bacillus), or spherical (coccus), and are characterized by an increased tolerance to acidity (low pH range). This aspect helps LAB to outcompete other bacteria in a natural fermentation, as they can withstand the increased acidity from organic acid production (e.g., lactic acid). Laboratory media used for LAB typically include a carbohydrate source, as most species are incapable of respiration. LAB are catalase negative. They consist of the organelles of a simple bacterial structure. LAB are amongst the most important groups of microorganisms used in the food industry.[1]

Two main hexose fermentation pathways are used to classify LAB genera. Under conditions of excess glucose and limited oxygen, homolactic LAB catabolize one mole of glucose in the Embden-Meyerhof-Parnas pathway to yield two moles of pyruvate. Intracellular redox balance is maintained through the oxidation of NADH, concomitant with pyruvate reduction to lactic acid. This process yields two moles of ATP per mole of glucose consumed. Representative homolactic LAB genera include Lactococcus, Enterococcus, Streptococcus, Pediococcus, and group I lactobacilli.

Heterofermentative LAB use the pentose phosphate pathway, alternatively referred to as the pentose phosphoketolase pathway. One mole of glucose-6-phosphate is initially dehydrogenated to 6-phosphogluconate and subsequently decarboxylated to yield one mole of CO2. The resulting pentose-5-phosphate is cleaved into one mole glyceraldehyde phosphate (GAP) and one mole acetyl phosphate. GAP is further metabolized to lactate as in homofermentation, with the acetyl phosphate reduced to ethanol via acetyl-CoA and acetaldehyde intermediates. In theory, end products (including ATP) are produced in equimolar quantities from the catabolism of one mole of glucose. Obligate heterofermentative LAB include Leuconostoc, Oenococcus, Weissella, and group III lactobacilli. 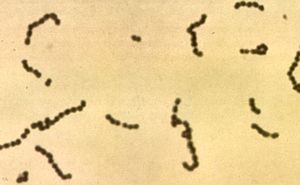 In 1985, members of the diverse genus Streptococcus were reclassified into Lactococcus, Enterococcus, Vagococcus, and Streptococcus based on biochemical characteristics, as well as molecular features. Formerly, streptococci were segregated primarily based on serology, which has proven to correlate well with the current taxonomic definitions. Lactococci (formerly Lancefield group N streptococci) are used extensively as fermentation starters in dairy production, with humans estimated to consume 1018 lactococci annually.[citation needed] Partly due to their industrial relevance, both L. lactis subspecies (L. l. lactis and L. l. cremoris) are widely used as generic LAB models for research. L. lactis ssp. cremoris, used in the production of hard cheeses, is represented by the laboratory strains LM0230 and MG1363. In similar manner, L. lactis ssp. lactis is employed in soft cheese fermentations, with the workhorse strain IL1403 ubiquitous in LAB research laboratories. In 2001, Bolotin et al. sequenced the genome of IL1403, which coincided with a significant shift of resources to understanding LAB genomics and related applications.

Notes:
♠ Strains found at the National Center for Biotechnology Information, but not listed in the List of Prokaryotic names with Standing in Nomenclature

A broad number of food products, commodity chemicals, and biotechnology products are manufactured industrially by large-scale bacterial fermentation of various organic substrates. Because enormous amounts of bacteria are being cultivated each day in large fermentation vats, the risk that bacteriophage contamination rapidly brings fermentations to a halt and cause economical setbacks is a serious threat in these industries. The relationship between bacteriophages and their bacterial hosts is very important in the context of the food fermentation industry. Sources of phage contamination, measures to control their propagation and dissemination, and biotechnological defence strategies developed to restrain phages are of interest. The dairy fermentation industry has openly acknowledged the problem of phage contamination, and has been working with academia and starter culture companies to develop defence strategies and systems to curtail the propagation and evolution of phages for decades.[5]

The first contact between an infecting phage and its bacterial host is the attachment of the phage to the host cell. This attachment is mediated by the phage's receptor binding protein (RBP), which recognizes and binds to a receptor on the bacterial surface. RBPs are also referred to as host-specificity protein, host determinant, and antireceptor. For simplicity, the RBP term will be used here. A variety of molecules have been suggested to act as host receptors for bacteriophages infecting LAB; among those are polysaccharides and (lipo)teichoic acids, as well as a single-membrane protein. A number of RBPs of LAB phages have been identified by the generation of hybrid phages with altered host ranges. These studies, however, also found additional phage proteins to be important for successful phage infection. Analysis of the crystal structure of several RBPs indicates that these proteins share a common tertiary folding, and support previous indications of the saccharide nature of the host receptor. Gram-positive LAB have a thick peptidoglycan layer, which must be traversed to inject the phage genome into the bacterial cytoplasm. Peptidoglycan-degrading enzymes are expected to facilitate this penetration, and such enzymes have been found as structural elements of a number of LAB phages.[5]

Probiotics are products aimed at delivering living, potentially beneficial, bacterial cells to the gut ecosystem of humans and other animals, whereas prebiotics are indigestible carbohydrates delivered in food to the large bowel to provide fermentable substrates for selected bacteria. Strains of LAB are the most common microbes employed as probiotics. Two principal kinds of probiotic bacteria, members of the genera Lactobacillus and Bifidobacterium, have been studied in detail.[1][6]

Most probiotic strains belong to the genus Lactobacillus. Probiotics have been evaluated in research studies in animals and humans with respect to antibiotic-associated diarrhoea, travellers' diarrhoea, pediatric diarrhoea, inflammatory bowel disease, and irritable bowel syndrome. In the future, probiotics possibly will be used for different gastrointestinal diseases, vaginosis, or as delivery systems for vaccines, immunoglobulins, and other therapies.[7]