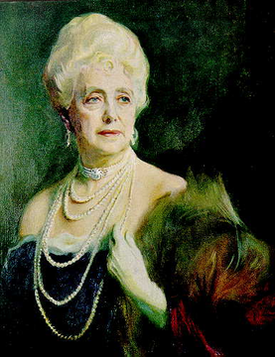 The Countess of Airlie, the lady-in-waiting of Queen Mary

A lady-in-waiting is a female personal assistant at a court, royal or feudal, attending on a queen (either if she is the queen regent or the queen consort), a princess, or a high-ranking noblewoman. Historically, in Europe, a lady-in-waiting was often a noblewoman from a family in "good society", but who was of lower rank than the woman on whom she attended. Although she may or may not have received compensation for the service she rendered, a lady-in-waiting was considered more of a companion to her mistress than a servant.

Lady-in-waiting is often a generic term for women whose relative rank, title, and official functions varied, although such distinctions were also often honorary. A royal woman may or may not be free to select her ladies, and, even when she has such freedom, her choices are usually heavily influenced by the sovereign, her parents, her husband, or the sovereign's ministers (for example, in the so-called Bedchamber crisis).

The duties of ladies-in-waiting varied from court to court, but functions historically discharged by ladies-in-waiting included proficiency in the etiquette, languages, and dances prevalent at court; secretarial tasks; reading correspondence to her mistress and writing on her behalf; embroidery, painting, horse riding, music making and participation in other queenly pastimes; wardrobe care; supervision of servants; keeping her mistress abreast of activities and personages at court, and discreetly relaying messages upon command.

Historically, within certain traditional states of the Bini and Yoruba peoples in Nigeria, the queen mothers and high priestesses were considered "ritually male" due to their social eminence. Due to this fact, they were often attended on by women who belonged to their harems in much the same way as their actually male counterparts were served by women who belonged to theirs. Although these women effectively functioned as ladies-in-waiting, were often members of powerful families of the local nobility in their own right, and were not usually used for sexual purposes, they were none-the-less referred to as their principals' wives.

The same custom exists among a number of other tribes in the continent, such as the Lobedu people of Southern Africa.

The highest rank among the female courtiers court was the Obersthofmeisterin (Mistress of the Robes).[3] She was second in rank after the empress herself, and responsible for all the female courtiers. Below her were the ayas, essentially governesses of the imperial children and heads of the children's court.[4] Third in rank was the Fräuleinhofmeisterin: she was the replacement of the Obersthofmeisterin when necessary, but otherwise had the responsibility of the unmarried female courtiers, their conduct and service.[5] The rest of the female noble courtiers consisted of the Hoffräulein (maid of honour), unmarried females from the nobility who normally served for a few years before they married. The Hoffräulein could sometimes be promoted to Kammerfräulein (Maid of honor of the Chamber).[6]

In Belgium the ladies-in waiting have historically been chosen by the Queen herself from among the Catholic noble houses of Belgium. The chief functions at court were undertaken by members of the higher nobility, involving much contact with the royal ladies. Belgian princesses were assigned a lady upon their 18th birthday. Princess Clementine was given a Dame by her father, a symbolic act of adulthood. When the Queen entertains, the ladies welcome guests and assist the hostess in sustaining conversation.

Female relatives were often appointed on the presumption that they could be trusted as confidantes to the queen; Lady Margaret Lee was a Lady of the Privy Chamber to Queen Anne Boleyn, just as Lady Elizabeth Seymour-Cromwell was to Queen Jane Seymour. The duties of ladies-in-waiting at the Tudor court were to act as royal companions, and to accompany the Queen wherever she went. Tudor queens often had wide personal latitude in selection of their ladies-in-waiting. Usually ladies-in-waiting came from families that were highly thought of in good society; the nobility, court officials, knights and military officers, or trusted provincial supporters of the dynasty.

In the current Royal Household of the United Kingdom Lady-in-Waiting is a woman attending a female member of the Royal Family. A woman attending on a Queen Regnant or Queen Consort is often (informally) known by the same title, but is more formally styled either: Woman of the Bedchamber, Lady of the Bedchamber or Mistress of the Robes, depending on which of these offices she holds. The Women are in regular attendance, but the Mistress of the Robes and the Ladies of the Bedchamber are normally required only for ceremonial occasions. The phrase Lady-in-Waiting to The Queen has, however, been used in formal documents to denote which of the Women is actually "on duty" at any one time.[7]

There were formerly other office-holders, including Maids of Honour, whose service entitled them to the style of The Honourable for life.[9] In recent times, Maids of Honour have only been appointed for coronations.

In Cambodia, the term "ladies-in-waiting" refers to high ranking female servants who served food and drink, fanned and massaged, and sometimes provided sexual services to the King. Conventionally, these women could work their way up from maids to ladies-in-waiting, concubines, or even queen consort. However, the six favorite court ladies of King Sisowath of Cambodia were probably initially drawn from the ranks of classical royal dancers of the lower class. He was noted for having the most classical dancers as concubines. The imperial celestial dancer, Apsara, was one of these. This practice of drawing from the ranks of royal dancers began in the Golden Age of the Khmer Kingdom. Srey Snom (Khmer: ស្រីស្នំ) is the Cambodian term for the Khmer "lady-in-waiting".

The early modern Danish court and the Swedish equivalent, were organized according to the German court model, in turn inspired by the Imperial Austrian court model. [10] This model roughly organized the female noble courtiers in the class of the unmarried maid of honor, supervised by the hofmeisterin, normally a married or widowed elder woman. 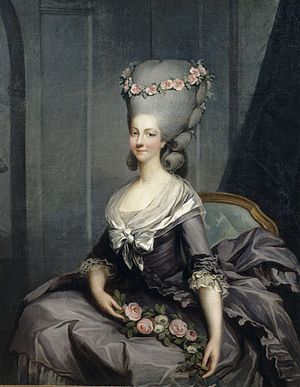 In France, the highest office of a lady-in-waiting was that of a Surintendante (Mistress of the Robes) of the Queen, who was the chief female courtier. She was the only female courtier to give an oath of loyalty to the King himself except for the Governess of the Children of France.[11] This office was temporarily abolished between the death of Marie Anne de Bourbon (1697–1741) (Surintendante in 1725-1741) and the appointment of Marie Louise of Savoy-Carignan, Princesse de Lamballe in 1775. The second highest rank was that of the two senior ladies-in-waiting, the première dame d'honneur and the dame d'atour.[12] Until 1674, there had been married female courtiers called dame d'honneur and unmarried called filles d'honneur (maid of honour), but that year, they were replaced by the dame du palais, who were theoretically supposed to be twelve.[13] On the level below them in rank were the première femme du Chambre, who in turn over ranked the remaining femme de chambres and lavandières.[14]

Gungnyeo (literally "palace women") is a Korean term referring to women who wait upon the King and other royalty in traditional Korean society. It is short for gungjung yeogwan, which translates as "a lady officer of the royal court". Gungnyeo includes sanggung (palace matron) and nain (assistant court ladies), both of whom hold rank as officers. The term is also used more broadly to encompass women in a lower class without a rank, such as musuri (lowest maids in charge of odd chores), gaksimi, sonnim, uinyeo (female physicians), as well as nain and sanggung.

Queen Beatrix of the Netherlands had a total of seven Hofdames. They accompanied the Queen and the other female members of the Royal House during visits and receptions at the Royal Court. The monarch paid for their expenses, but they did not receive any salary. Not all of these ladies were members of the Dutch aristocracy, but each had a "notable" husband. Excellent social behavior and discretion was the most important recommendation for becoming a Hofdame. In 2012 the Hofdames were Ietje van Karnebeek-van Lede, Lieke Gaarlandt-van Voorst van Beest, Julie Jeekel-Thate, Miente Boellaard-Stheeman, Jonkvrouwe Reina de Blocq van Scheltinga, Elizabeth Baroness van Wassenaer-Mersmans and Bibi Baroness van Zuylen van Nijevelt-Jonkvrouwe den Beer Poortugael.

The Grootmeesteres (Grandmistress) was the highest-ranking lady at the Royal Court. Since 1984 the position has been held by Martine van Loon-Labouchere, descendant of the famous banker family, a former diplomat and the widow of Jonkheer Maurits van Loon of the famous Amsterdam canal estate.

In Norway, there was no royal court present during the union with Denmark in 1387–1814, as the Danish court in Copenhagen were then counted as the Norwegian court as well. During the union between Norway and Sweden from 1814 to 1905, there were Norwegian courtiers appointed, who served during the Swedish royal family's visits to Norway. The female courtiers were appointed according to the Swedish court model, that is to say the class of hovfröken (Maid of honor); kammarfröken (Chief Maid of Honor); statsfru (Lady of the Bedchamber), all supervised by the hovmästarinna (Mistress of the Robes): these posts were appointed in 1817. [15]

When the union between Sweden and Norway was dissolved in 1905, a permanent Norwegian royal court was established.

See Lady-in-waiting of the Imperial Court of Russia

The early modern Spanish royal court model in the 16th century was also the model of the Austrian court before 1619.[16]

The highest rank female courtier was the Camarera mayor de Palacio (Mistress of the Robes).[17] The second rank was shared by the ayas (royal governess) and guardas (chaperones). The third rank was the dueñas de honor, the married ladies-in-waiting, who were responsible for not only the unmarried damas (Maid of honor), but also of the female slaves and dwarfs, who were classified as courtiers and ranked before the mozas (maids) and lavanderas (washer women).[18]

The early modern Swedish court, as well as the Danish equivalent, were re-organized in the early 16th-century according to the German court model, in turn inspired by the Imperial Austrian court model.[19] This model roughly organized the female noble courtiers in the class of the unmarried hovfröken (maid of honor: until 1719 named hovjungfru) or kammarfröken (Chief Maid of Honor: until 1719 named kammarjungfru).[20] They were supervised by the hovmästarinna (Court Mistress, equivalent to Mistress of the Robes), normally a married or widowed elder woman.[21] Under this class of female noble courtiers, were the non-noble female servants. They were headed by the normally married kammarfru (Mistress of the Chamber, roughly equivalent to a Ladies Maid). She supervised the kammarpiga (Chamber Maid).[22] From the reign of Queen Christina, the hovmästarinna was supervised by the överhovmästarinna (Chief Court Mistress or Chief Mistress of the Robes).[23] Additionally, in 1774 the post statsfru (Mistress of the State) was introduced, which was originally simply the title for a married lady-in-waiting with the rank between the hovmästarinna and the kammarfröken.

Queen Silvia of Sweden has only three hovdamer (ladies-in-waiting). Her chief lady-in-waiting is the statsfru. 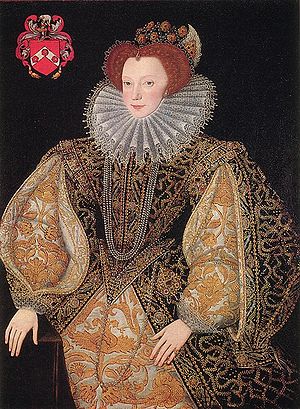