Lagos (Portuguese pronunciation: [ˈlaɣuʃ], literally lakes, from the Latin lacobrica) is a municipality at the mouth of Bensafrim River and along the Atlantic Ocean, in the Barlavento region of the Algarve, in southern Portugal.[1] The population in 2011 was 31,049,[2] in an area of 212.99 km².[3] The main town of Lagos (which includes only the parish of São Sebastião e Santa Maria) has a population of approximately 22,000.[4] Typically, these numbers increase during the summer months, with the influx of visiting tourists and seasonal residents. While the majority of the population lives along the coast and works in tourism and services, the inland region is sparsely inhabited, with the majority of the people working in agriculture and forestry.

Lagos is one of the most visited cities in the Algarve and Portugal, due to its variety of tourist-friendly beaches, rock formations (Ponta da Piedade), bars, restaurants and hotels, renowned for its vibrant summer nightlife and parties.[citation needed] Yet, Lagos is also a historic centre of the Portuguese Age of Discovery, frequent home of Henry the Navigator, historical shipyard and, at one time, centre of the European slave trade.[5] In 2012, travel website TripAdvisor, classified Lagos as the number 1 travel destination, on a list of "15 destinations on the rise" worldwide.[6] 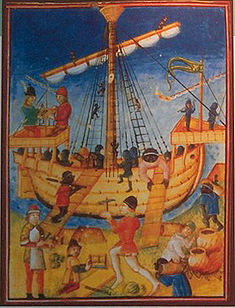 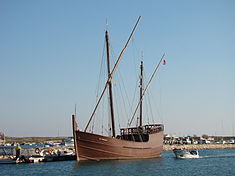 Replica of the caravel Boa Esperança 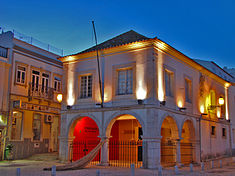 Lagos is an ancient maritime town with more than 2000 years of history. The name Lagos comes from a Celtic settlement, derived from the Latin Lacobriga, the name of the settlement was established during the pre-Punic civilizations. It became an early settlement of the Carthaginians, who recruited Celtic tribesmen in their war against the Romans (the Punic Wars). Owing to its already important harbour, it was colonized by the Romans and integrated into the Roman province of Lusitania, becoming known as Lacobriga. Quintus Sertorius, a rebellious Roman general, helped by the Lusitanians of Lacobriga (who had been oppressed under Roman Generals and members of Lucius Cornelius Sulla party), successfully defeated the Roman army of Caecilius Metellus Pius probably at nearby Monte Molião.

With the fall of Rome, the town of Lagos was occupied in the 6th century by the Visigoths from the Kingdom of Toledo and later by the Byzantines.

The Moors arrived in the 8th century from North Africa, renaming the settlement Zawaia (meaning lago, or lake). It became part of the much larger coastal region of al-Gharb, which eventually became known as the algarve. The Moors fortified the town with Lagos Castle and established important trade links to Northern Africa from their bases in the Iberian peninsula. In 1174, the local Wāli gave permission for the Christian peoples to construct a church dedicated to São João Baptista, which was built outside the town's walls (becoming the oldest church in the Algarve).

Even as King Afonso Henriques advanced to the south, the Christian Reconquista never made it into Algarve and Alentejo, and remained under Moorish control. King Sancho I, with the support of Crusader forces used Lagos as a stepping stone to attack the fortress of Alvôr.[7] Zawaia was eventually captured by King Afonso III of Portugal in 1241, but was only taken definitively in 1249. From this period on the King began self-styling himself as the "King of Portugal and the Algarve", stressing the fact that the Algarve (which had for so long been ruled by the Moors as a foreign country) had been annexed into the dominion of the Portuguese. Lagos became an independent jurisdiction under the rule of King Peter I in 1361.

King John I assembled his fleet in the harbour of Lagos, before setting sail for the siege and conquest of the city of Ceuta in 1415. This was the first step in opening the Muslim world to medieval Europe, which in fact led to the Age of Discovery with Portuguese explorers sailing across the whole world. By the 15th century, Lagos became the centre of Portuguese maritime exploration, with ships ordered south to trace the shoreline of Africa in order to find routes to India. Infante Henry the Navigator, third son of King John, lived most of the time in Lagos. From here he directed expeditions to Morocco and to the western coast of Africa with caravels, lateen-rigged ships with excellent seafaring capabilities. Lagos was also the home port for Gil Eanes who was the first to sail beyond Cape Bojador in 1434, after a failed attempt in 1433 that put him out of favour with the, then considered the end of the world. The act of rounding the Cape, much like the later rounding of the Cape of Good Hope, permitted Eanes (and the navigators that followed) to advance into the African subcontinent. When, by 1443, Lançarote (then fiscal officer of the crown) had sailed as far as Arguim and brought back 275 Africans, the Portuguese had sufficient slaves to relieve the perpetual handicap of agricultural labour.[8]

Over the following decades, news of discoveries and achievements, and ships loaded with spices and goods would flow into the port of Lagos. It was also the gateway for the first African slaves into post-medieval Europe.[9] Even before Africa was opened-up to the Portuguese, the seamen of Lagos were already enthusiastic slave-catchers.[10] From the first slave markets in Lagos (the Mercado de Escravos, which opened in 1444), many Africans were dispersed throughout Europe, bringing a considerable income to the Portuguese monarchy and merchant classes, as well as cheap labour force.[9] As the major sponsor of these expeditions, Prince Henry received one-fifth of the selling price of every slave. The demand for the indentured labour force was so high that, by 1450, profit on Mauritanian slaves was 700 percent.[11] The discovery of gold by Alfonso Gonçales also increased activities in Lagos, whose residents petitioned the Infante Henry to establish a trading company to pursue gold deposits in the region.[12] This included Juan Dias (ancestor of Bartolomeu Dias who rounded the Cape of Good Hope), Gil Eanes, Lançarote de Freitas, Estevan Alfonso and Rodrigo Alvarez, who provisioned a squadron of six caravels to travel to isle of Garças in 1444, but returned with 150 Africans.[12] 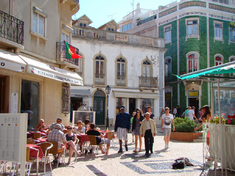 The historic centre of Lagos

Following the death of Prince Henry, and the expansion into the Atlantic and New World, the port of Lagos continued to receive shipments of goods and slaves, but its role began to decrease. Lisbon, began to prosper, with ships returning directly from the colonies of the Azores, Madeira and Brazil, while trading houses began to relocate to the capital. But, even as the wealth arrived in Lisbon and Lagos, the ostentation was widely on display in the royal residences.[13]

King Sebastian, obsessed with his plans for a great crusade against the Kingdom of Fez, assembled a huge fleet in Lagos in 1578.[14] During this ill-fated attempt he and most of Portugal's nobility were killed in the Battle of Ksar El Kebir in Morocco, eventually causing a succession crisis, that eventually resulted in the Iberian Union.

When Portugal came under Spanish rule, the Portuguese coast became a target for the English fleet. Lagos, close to the Spanish naval base of Cádiz, was attacked by Sir Francis Drake in the late 1580s, but was defended by its inhabitants, resulting in Drakes sack of Faro.[15] But, the coast was under regular attack of other pirates and corsairs, in addition to the Spanish who bombarded the Algarve during the Portuguese Restoration War (1640–1668), which led to the construction of a string of forts all along the coast. One of them was the late-17th-century Ponta da Bandeira Fort in Lagos, which was completed between 1679 and 1690 (according to the stone inscription over the main door).

From 1576 to 1755, Lagos was a high-profile capital of the Algarve, until the old Portuguese town was destroyed by the earthquake and tsunami of 1755. Although some walls from the 16th century still remain, as well as the governor's castle, many of the buildings are from the 17th century. 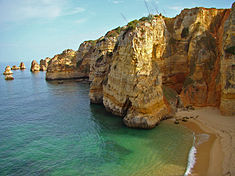 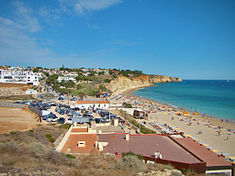 Porto de Mós beach (Praia do Porto de Mós) is one of the most popular beaches in Lagos, along with Dona Ana and Meia Praia

By its geographical position (east-northeast to west-southwest orientation) and lithological diversity, the Algarve stands out as unique stratigraphic and morpho-tectonicregion.[16] A peripheral Carboniferous unit of the Variscan orogeny, it constitutes the Mesozoic and Cenozoic sedimentary layers, deposited onto two totally distinct superimposed basins.[16] Between the Middle-Upper Triassic to Hettangian, sediments evolved from continental (fluvial red sandstone) to shallow marine over the entire region, which included instances of evaporates, tholeiite fissural magmas, lava flows, volcanic ash and pyroclasts.[16]

The area of Lagos, conforms to the Middle Miocene Lagos-Portimão formation (a band that extends along the coast from Lagos to Albufeira, abutting the Serra do Caldeirão to the north) and which corresponds to marine sedimentation over relatively stable, but a minorly deformed limestone shelf platform.[16][17][18] A period of calm during the intra-Miocene (of approximately 2.4 Ma) led to generalized exposure and development of karst, that influences the present day coastline.[16][18] The conspicuous horizontal bending of this profile in the cliffs of Lagos, much like the remainder of the Lagos-Portimão formation, is formed by alternating bands of siliciclastic and calcareous lithologies.[17] The low degree of cementation in the layers causes a high degree of instability of the cliffs.[17] The littoral and cliff sands are dominated by various bivalve organisms, bryozoans, larger benthic foraminifers and Coralline algaewith minor additions of echinoids and balanids implying a shallow-water depositional system of a warm-temperate climatic regime.[17] The locality of Cerro das Mós, from where a large crocodilian (Tomistoma schlegelii) tooth was collected long ago,[19] has also produced some Odontoceti teeth. These may be dated from the Serravallian, which, constitute the oldest marine mammal occurrence in Algarve.[18][20]

Lagos has many natural interest sites, including:

The Bravura Dam, in the parish of Bensafrim 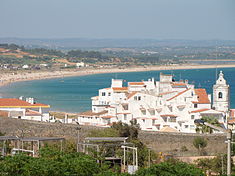 The municipality of Lagos is located approximately 35 kilometres (22 miles) east of the Cape St. Vincent coast, along the southern coast of the Algarve. It is surrounded along its borders by the municipalities of Vila do Bispo (to the west), Aljezur (to the northwest), Monchique (to the northeast) and Portimão (to the east).

To the north of Lagos is the road to Silves, the first capital of Algarve, Monchique (spa town/mountain), Milfontes, a coastal town and port/harbour of the city of Sines, that winds through the scenic protected landscape of the Southwest Natural Park (Costa Sudoeste Alentejana e Vicentina).

Administratively, the municipality is divided into 4 civil parishes (freguesias):[22]

Lagos is twinned with: 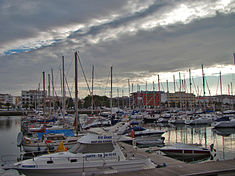 Lagos' economy, like many coastal towns in Portugal, has always been closely linked to the sea, and fishing has been an important activity since very ancient times. Since 1960, the city has embraced tourism, which has become its most important economic activity. It has beautiful beaches, good climate, the sea, a scenic coastline, and historical patrimony.

The Marina de Lagos has 460 berths and has become an important centre for long-distance cruisers, and it is also known for its modern drawbridge.

Lagos Station is the western terminus of the railway line from Vila Real de Santo António (via Tavira and Faro). The passenger train service is operated by Comboios de Portugal (CP). Connections are available at Faro for trains to Lisbon and Porto. 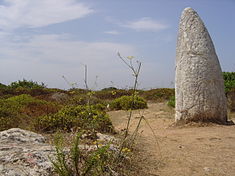 The obelisk-like Menhir of Cabeço do Rochedo, representing the Neolithic history of the settlements of Lagos, in Bensafrim 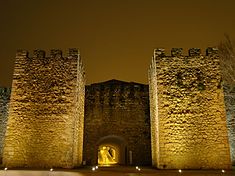 The walls of the old city of Lagos, that extended around the old quarter encircling the central part of Santa Maria and São Sebastião 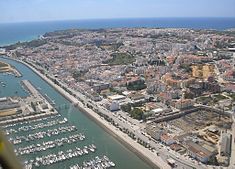 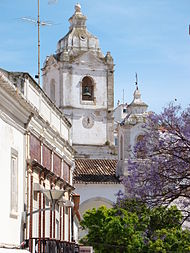 The two towers of Santo António's Church, which also has a museum inside

Many local traditions are celebrated in the municipality and range from gastronomy to traditional handicrafts.

In gastronomy, there are the local specialties: Dom rodrigos and morgados cookies based on local products, such as almonds, figs and eggs. Lagos is also a wine producing region and is famous for its moscatel wine, and also for a strong alcoholic spirit, the aguardente de medronho, made of berries of strawberry tree.