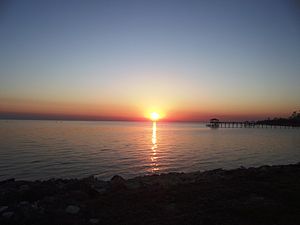 In descending order of area, the lake is located in parts of six Louisiana parishes: St. Tammany, Orleans, Jefferson, St. John the Baptist, St. Charles, and Tangipahoa. The water boundaries were defined in 1979 (see list of parishes in Louisiana).

Lake Pontchartrain is named for Louis Phélypeaux, comte de Pontchartrain. He was the French Minister of the Marine, Chancellor, and Controller-General of Finances during the reign of France's "Sun King," Louis XIV, for whom the colony of La Louisiane was named.[2]

Lake Pontchartrain is not a true lake but an estuary connected to the Gulf of Mexico via the Rigolets strait (known locally as "the Rigolets") and Chef Menteur Pass into Lake Borgne, another large lagoon, and therefore experiences small tidal changes. It receives fresh water from the Tangipahoa, Tchefuncte, Tickfaw, Amite, and Bogue Falaya rivers, and from Bayou Lacombe and Bayou Chinchuba. It is one of the largest wetlands along the Gulf Coast of North America.[3] It comprises more than 125,000 ha of wetland, including bottomland hardwoods and cypress swamps (although these have been severely degraded by past logging) along with a complex mixture of herbaceous wetlands including fresh, intermediate and brackish marsh.[4]

Salinity varies from negligible at the northern cusp west of Mandeville up to nearly half the salinity of seawater at its eastern bulge near Interstate 10. Lake Maurepas, a true freshwater lake, connects with Lake Pontchartrain on the west via Pass Manchac. The Industrial Canal connects the Mississippi River with the lake at New Orleans. Bonnet Carré Spillway diverts water from the Mississippi into the lake during times of river flooding.

The lake was created 2,600 to 4,000 years ago as the evolving Mississippi River Delta formed its southern and eastern shorelines with alluvial deposits.[5] Its Native American name was Okwata ("Wide Water"). In 1699, French explorer Pierre Le Moyne d'Iberville renamed it Pontchartrain after Louis Phélypeaux, comte de Pontchartrain.

Human habitation of the region began at least 3,500 years ago, but increased rapidly with the arrival of Europeans about 300 years ago. The great American naturalist, William Bartram, explored the north shore during a trip west in 1777.[6] In 1852 a railroad was constructed to link New Orleans to the north. Engines turned at Pass Manchac. However, the pilings were burned to the water line in the Civil War.[7] The great cypress swamps of the area were heavily logged in the early 20th century; many have not regrown.[8][9]

The current population in the region is over 1.5 million. There have been many problems with conservation management of the forests and wetlands.[10][11] The United States Geological Survey is currently monitoring the environmental effects of shoreline erosion, loss of wetlands, pollution from urban areas and agriculture, saltwater intrusion from artificial waterways, dredging, basin subsidence and faulting, storms and sea-level rise, and freshwater diversion from the Mississippi and other rivers.[12] With proper management of this lake and its wetlands, there is great potential to enhance the productivity of wetlands, and to maintain biological diversity to support an ecotourism industry that will diversify the economy.[9]

Owing to past exploitation, the ecosystems of the lake have been placed under stress. Marshes, for example, are turning to open water, and cypress swamps are being killed by salt water intrusion. However, Brown Pelicans and Bald Eagles, once scarce, are now a common sight along the shores. A team of experts assembled by The Nature Conservancy assessed the situation in 2004.[13] They identified seven target habitat types that were in particular need of conservation management: Bottomland hardwood forest, Cypress swamp, Relict ridge woodland, Fresh/intermediate marsh, Brackish/salt marsh, Lake open water, and Littoral submersed aquatic vegetation. The bottomland hardwood forest and cypress swamp are suffering from lack of fresh water input and sediment deposition owing to the levees upstream from the lake. In addition, bottomland hardwoods are being invaded by exotic species such as Chinese tallow while freshwater marshes are being invaded by exotic species such as Elephant's-ear.[3] The team also identified four key animal species that could indicate the degree to which the system declines or improves. These were Rangia clam (representing lake bottom habitat), Gulf sturgeon and Paddlefish (representing fish communities) and the Alligator snapping turtle (one of the largest freshwater turtles in the world, but in decline owing to over- harvesting). The future of the lake depends, in part, on restoring annual spring floods to the wetlands of the lake basin, and controlling urban sprawl on the North shore. Selected species, like the Paddlefish and Alligator snapping turtle, would benefit from reduced harvesting. The lake could change considerably without such conservation planning. A few examples of future change might include more cypress swamps converting to anthropogenic marsh or open water, Chinese tallow displacing native forests, and, with a warming climate, mangrove trees replacing brackish marsh.[14] Hence, the ecosystems of the lake now, and in the future, depend very much upon some basic decisions about human activities in the vicinity of the lake, and, even more so, human activity upstream along the Mississippi River. 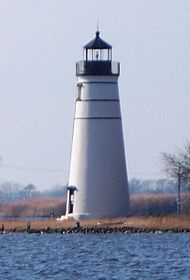 At the southern terminus of LA 1077 in Madisonville, this lighthouse is on the west estuary of the Tchefuncte River at Lake Pontchartrain and was constructed in 1837.

North of Lake Pontchartrain is an area called the North Shore, Northshore, or Northlake area. It includes the cities of Mandeville, Covington, Abita Springs, Madisonville, Lacombe, and Slidell in Saint Tammany Parish; Ponchatoula, Hammond, and Amite in Tangipahoa Parish; and Franklinton and Bogalusa in Washington Parish.

These three Northshore parishes form the eastern Florida Parishes. The landscape here is mostly uplands that were once dominated by long leaf pine savannas and interrupted by occasional large rivers. The savannas were maintained by regular fires caused by lightning; they produced the distinctive fauna and flora of this region.[9]

New Orleans was established at a Native American portage between the Mississippi River and Lake Pontchartrain. The lake provides numerous recreational activities for people in New Orleans and is also home to the Southern Yacht Club. In the 1920s, the Industrial Canal in the eastern part of the city opened, providing a direct navigable water connection, with locks, between the Mississippi River and the lake. In the same decade, a project dredging new land from the lake shore behind a new concrete floodwall began; this would result in an expansion of the city into the former swamp between Metairie/Gentilly Ridges and the lakefront. The Lake Pontchartrain Causeway was constructed in the 1950s and 1960s, connecting New Orleans (by way of Metairie) with Mandeville, and bisecting the lake in a north-northeast line. 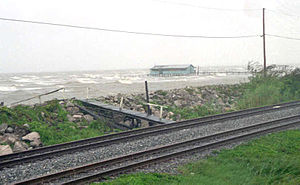 Lake Pontchartrain at New Orleans during Hurricane Georges in 1998; lakefront fishing camps outside of the protection levee suffered severe damage.

During hurricanes, a storm surge can build up in Lake Pontchartrain. Wind pushes water into the lake from the Gulf of Mexico as a hurricane approaches from the south, and from there it can spill into New Orleans.

A hurricane in 1947 flooded much of Metairie, much of which is slightly below sea level due to land subsidence after marshland was drained. After the storm, hurricane-protection levees were built along Lake Pontchartrain's south shore to protect New Orleans and nearby communities. A storm surge of 10 feet (3.0 m) from Hurricane Betsy overwhelmed some levees in eastern New Orleans in 1965, while storm surge funneled in by the Mississippi River–Gulf Outlet Canal and a levee failure flooded most of the Lower 9th Ward. After this the levees encircling the city and outlying parishes were raised to heights of 14 to 23 feet (4.3 to 7.0 m). Due to cost concerns, the levees were built to protect against only a Category 3 hurricane; however, some of the levees initially withstood the Category 5 storm surge of Hurricane Katrina (August 2005), which only slowed to Category 3 winds within hours of landfall (due to a last-minute eyewall replacement cycle).

Experts using computer modeling at Louisiana State University after Hurricane Katrina have concluded that the levees were never topped but rather faulty design, inadequate construction, or some combination of the two were responsible for the flooding of most of New Orleans: some canal walls leaked underneath, because the wall foundations were not deep enough in peat-subsoil to withstand the pressure of higher water.[15]

Congress failed to fully fund an upgrade requested during the 1990s by the Army Corps of Engineers, and funding was cut in 2003-04 despite a 2001 study by the Federal Emergency Management Agency warning that a hurricane in New Orleans was one of the country’s three most likely disasters.[16] Raising and reinforcing the levees to resist a Category 5 hurricane might take 25 years to complete.[17] Some estimates place the cost at $25 billion.

When Hurricane Katrina reached Category 5 in 2005, some experts predicted that the levee system might fail completely if the storm passed close to the city. Although Katrina weakened to a Category 3 before making landfall on August 29 (with only Category 1-2 strength winds in New Orleans on the weaker side of the eye of the hurricane), the outlying New Orleans East area along south Lake Pontchartrain was in the eyewall with winds, preceding the eye, nearly as strong as those experienced in Bay St. Louis, Mississippi. Canals near Chalmette began leaking at 8 am,[citation needed] and some levees/canals, designed to withstand Category 3 storms, suffered multiple breaks the following day (see Effects of Hurricane Katrina in New Orleans), flooding 80% of the city.

The walls of the Industrial Canal were breached by storm surge via the Mississippi River Gulf Outlet, while the 17th Street Canal and London Avenue Canal experienced catastrophic breaches, even though water levels never topped their flood walls. Louisiana State University experts presented evidence that some of these structures might have had design flaws or faulty construction.[18]

There are indications that the soft earth and peat underlying canal walls may have given way. In the weeks before Katrina, tests of salinity in seepage pools near canals showed them to be lake water, not fresh water from broken mains. The 5.5-mile-long (8.9 km) I-10 Twin Span Bridge heading northeast between New Orleans and Slidell was destroyed. The shorter Fort Pike Bridge crossing the outlet to Lake Borgne remained intact.

Much of the northern sector of the suburban areas of Metairie and Kenner was flooded with up to 2 to 3 feet (0.6 to 0.9 m) of water. In this area, flooding was not the result of levee overtopping, but was due to a decision by the governmental administration of Jefferson Parish to abandon the levee-aligned drainage pumping stations.[19] This resulted in the reverse flow of lake water through the pumping stations into drainage canals which subsequently overflowed, causing extensive flooding of the area between I-10 and the lakefront. When the pump operators were returned to their stations, water was drained out of Metairie and Kenner in less than a day.[citation needed]

On September 5, 2005, the Army Corps of Engineers started to fix levee breaches by dropping huge sandbags from Chinook helicopters. The London Avenue Canal and Industrial Canal were blocked at the lake as permanent repairs started. On September 6, the Corps began pumping flood water back into the lake after seven days in the streets of New Orleans. Because it was fouled with dead animals, sewage, heavy metals, petrochemicals, and other dangerous substances, the Army Corps worked with the U.S. Environmental Protection Agency and Louisiana Department of Environmental Quality (LDEQ) to avoid major contamination and eutrophication of the lake.[20]

Aerial photography suggests that 25 billion US gallons (95,000,000 m3) of water covered New Orleans as of September 2, which equals about 2% of Lake Pontchartrain's volume.[citation needed] Due to a lack of electric power, the city was unable to treat the water before pumping it into the lake. It is unclear how long the pollution will persist and what its environmental damage to the lake will be, or what the long-term health effects will be in the city from mold and other contamination.

On September 24, 2005, Hurricane Rita did not breach the temporary repairs in the main part of the city, but the repair on the Industrial Canal wall in the Lower 9th Ward was breached, allowing about 2 feet (0.6 m) of water back into that neighborhood.

In literature and other media: