Lambton County is a county in Southwestern Ontario, Canada. It is bordered on the north by Lake Huron, which is drained by the St. Clair River, the county's western border and part of the Canada-United States border. To the south is Lake Saint Clair and Chatham-Kent, another county in Ontario. Lambton County's eastern border follows the Ausable River north until it reaches Lake Huron at the beach community of Grand Bend. The county seat is in the Town of Plympton-Wyoming.

Lambton County started as a part of the District of Hesse. The district of Hesse included British territories west of Long Point, (practically all of western Ontario). The district was latter divided and renamed using English district names (Essex, Suffolk, Kent, etc.). Lambton was part of Kent county. In 1849 districts were abolished and the County of Lambton was formed. Lambton and Kent first shared the capital city of Sandwich (since renamed as Windsor, Ontario). In 1852 the partnership was dissolved and Lambton become a full county. It is named in honour of the Earl of Durham who lived in Lambton Castle.[3]

The largest city in Lambton County is Sarnia,[4] which is located at the mouth of the St. Clair River. The two Blue Water Bridges cross the river at Sarnia, connecting it to Port Huron, Michigan. The bridges are one of the busiest border crossings between the two countries. The river is also traversed by two passenger ferries further south, and a rail tunnel, also at Sarnia, runs underneath it. The CN rail tunnel accommodates double stacked rail cars.

Independent of the County, but located within the Lambton census division, are three First Nations reserves:

The demographics below are for the Lambton census division, which combines Lambton County and three First Nations reserves. 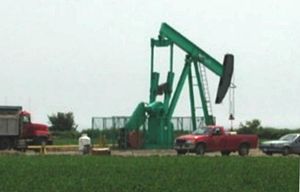 An oil well near Sarnia

Petrochemical and refining is the largest manufacturing sector in Lambton County's economy. Established during World War II, Sarnia and the area along the St. Clair River is home to a major processing centre for oil from Alberta.

In late 2010 and early 2011 a number of companies announced plans to provide ethane from the Marcellus Shale in the USA to Lambton County industries; providing a potential new feedstock for the production of ethylene in Lambton County.

Tourism is another important industry in Lambton County, especially along the lake and river. The community of Grand Bend, and the Pinery Provincial Park are especially popular tourist destinations, attracting thousands of people each week throughout the summer to their long, uninterrupted beaches. The part of Lambton County along Lake Huron known as Lambton Shores depends almost entirely upon the seasonal industries of tourism and agriculture for its well-being. There are also popular conservation areas along the St. Clair River, and a conservation area named Rock Glen Falls near Arkona along the Ausauble River internationally known for its Devonian period fossils.

Lambton County has 2,346 farms with a total of 592,793 acres. The largest single use of farmland in Lambton is crop production,with 85% of total farmland reported as land in crops. Over the last 20 years soybeans, wheat, and grain corn have accounted for over 80% of total area crop production in Lambton. The fourth and fifth leading crops are sugar beets and hay. Among other crops oats, barley and mixed grains are also produced. Top animal production includes dairy, beef, hog, and poultry...[7] 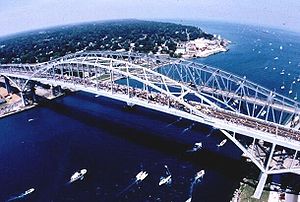