Lane County is a county located in the U.S. state of Oregon. As of the 2010 census, the population was 351,715,[2] making it the fourth-most populous county in Oregon. The county seat is Eugene.[3] It is named in honor of Joseph Lane, Oregon's first territorial governor.

Lane County comprises the Eugene, OR Metropolitan Statistical Area. It is the third largest MSA in Oregon, and the 144th largest in the country.[4][5]

Lane County was established on January 29, 1851. It was created from the southern part of Linn County and the portion of Benton County east of Umpqua County. It was named after the territory's first governor, Joseph Lane.[6] Originally it covered all of southern Oregon east to the Rocky Mountains and south to the California border. When the Territorial Legislature created Lane County, it did not designate a county seat. In the 1853 election, four sites competed for the designation, of which the "Mulligan donation" received a majority vote; however, since it was contiguous to the "Skinner claim" both became part of the new county seat known as Eugene.

In 1846 Elijah Bristow and his wife, the former Susannah Gabbart, had become the first white settlers to build a claim cabin within the present-day boundaries of Lane County, near Pleasant Hill. They had crossed the plains to California in the previous year, and came north with Eugene F. Skinner, Captain Felix Scott, and William Dodson.[7] As their party entered the valley between the Coast Fork and Middle Fork of the Willamette River, Bristow gazed around and exclaimed, "What a pleasant hill! Here is my home!"[8]

In 1852 John Diamond and William Macy led an exploration party to survey a shortcut for the Oregon Trail across the Cascade Range. The shortcut over the Willamette Pass became known as the Free Emigrant Road. Around 250 wagons with 1,027 people left the usual Oregon Trail route at Vale, Oregon, and followed Elijah Elliott through the central Oregon high desert. This became known as the Elliott Cutoff. When they reached what is now Bend, they sent scouts to the south to look for the road. Once settlers in the Willamette Valley discovered the emigrants were coming, a huge rescue effort was launched as the emigrants were out of supplies and in dire condition. The emigrants of this wagon train doubled the population of Lane County in 1853.[9]

The county has been vastly reduced from its original size by several boundary changes. One of the first changes gave it access to the Pacific Ocean, when it acquired the northern part of Umpqua County in 1853. With the creation of Wasco County in 1854, it lost all of its territory east of the Cascade Mountains. Minor boundary changes occurred with Douglas County in 1852, 1885, 1903, 1915, and 1917; with Linn County in 1907 and with Benton County in 1923. 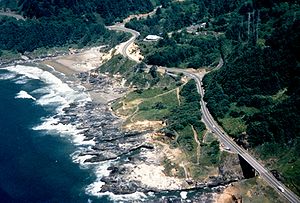 Cape Perpetua on the coastline of Lane County

Lane County is the fourth most populous county in Oregon. It grew more slowly from 2000 to 2010 than did the three larger counties, Multnomah (the most populous Oregon county), Washington and Clackamas.[20]

The US Forest Service is landlord of 48% of the lands within the county boundaries, a fact which has contributed to the county's inability to fund basic government services. The federal land, which can not be taxed, previously generated hundreds of millions of dollars in logging-derived support for government, but that support was sharply reduced when various environmental regulations curtailed logging by approximately 78%.[21] Although Congress subsequently passed a series of revenue replacing bills culminating in the Secure Rural Schools and Community Self Determination Act of 2000, the federal subsidies have not been adequate to fully replace logging as a means of supporting basic government services.[22] Today, according to the Oregon Criminal Justice Commission Report of 2009, Lane County crime rates are bad and continuing to worsen, but county law enforcement programs and services, from investigation to jail capacity, have been reduced to as little as 15% of state and national average capacity for a jurisdiction of similar size.[23]

Growth in the next decades is predicted to shift away from timber and agriculture to services, manufacturing of transportation equipment, printing and publishing, and high technology. As of July 2008, PeaceHealth Medical Group is the largest private employer in Lane County.[24] 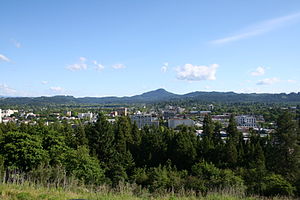 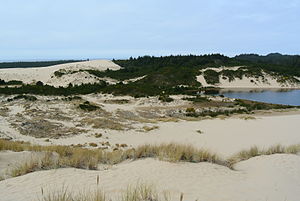